As sustained release protein supplements become more popular, the companies manufacturing them are spending more time and money on research and development.

While this is in their best interests, the follow on effect is that we, the users of those supplements, can now choose from an ever growing range of high quality proteins to boost our gains.

One of these newer generation protein supplements is BSN’s Syntha6.

It has quickly gained popularity, with both pro and amateur athletes singing its praises.

As you may have read in some of our other reviews, not all proteins are absorbed by the body at the same rate, so if you take your supplement at the wrong time, you can be wasting your time and money in doing so. Whey protein (concentrate and isolate), Casein and egg protein (Albumen) and others are all absorbed at different rates and in different stages of digestion respectively.

With this in mind, BSN have come up with a blend using 22gm of six different proteins to optimize the repair and building of muscle tissue. This is a slightly lower concentration of protein than many other brands with an average of around 24gm.

Most protein supplements manufacturers try to reduce the carb profile of their products to as low a figure as possible. Generally they are around 2-5gm per serve. Syntha6 on the other hand, has around 13gm (depending on flavor).

This isn’t an oversight on BSN’s part, it’s part of their strategy. By increasing the carb profile per serve, it means your body is getting it’s fuel from carbs as it should do, instead of using protein for fuel. This benefits us in two ways.

First, it means the available protein per serve is used to build and repair muscle tissue. After all, that’s why you’re using it in the first place right?

Second, when protein is used as fuel for energy, it can lead to more rapid dehydration, especially during a heavy workout and even if you are drinking regularly throughout. Using carbs for energy doesn’t have this effect so hydration and electrolyte depletion is less pronounced.

Something to note here is that 5gm of the carbs per serving are fibre which is 20% of the recommended daily intake (Based on only2000 calorie/day needs) so if your diet is lacking in fibre, that’s a nice little boost.

Usually at this point of my reviews I give a brief breakdown of the key amino acids in any supplement and their function in your body. However, the people at BSN will not release these facts. When visiting their site, you’ll be told:

“Unfortunately, we cannot release SYNTHA-6™’s exact amino acid profile, owing to the fact that the blend is proprietary. By releasing this amino acid breakdown, we would be potentially opening the door to competitors copying the ratios.”

What a load of BS(N)! Many of their competitors have “proprietary blends” but don’t feel the need to hide the details from the very people who have a right to know, us the consumers. If you are on a rigid supplementation regime for competition or medical reasons, this information can be crucial.

In fairness to BSN, they do state, that if you have a “specific inquiry” about a “specific amino acid’s concentration” you can call and lodge a “technical” inquiry and someone will help to answer your question.

Call me a skeptic, but if someone from research and development can tell me on the phone, couldn’t they just print it on the label? Or do the people in R&D follow a scripted response? 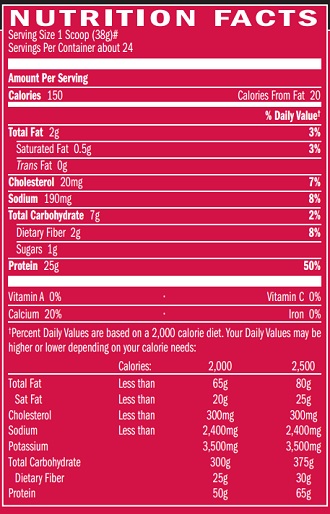 The macro nutrient breakdown of Syntha6 is a little different from many proteins on the market. As I’ve already said, it’s higher in carbs than a lot of its competitors and the same can be said of its caloric value. Usually you see a caloric value of between 100-120 per serve, but with BSN’s product, that figure almost doubles.
Serving size: 47.2gm (1 rounded scoop)
Calories: 190
From Fat: 50
Fat Total: 6gm
Saturated fat: 2gm
Trans Fat: 0gm
Protein: 22gm
Carbs: 13gm
Fibre: 5gm
Sugars: 3gm

This is where Sytha6 is miles ahead of the pack. BSN promote their product as:

I’m pleased to tell you they are right. If you recall some of my past reviews, I’ve stated a few times that taste is not a huge issue to me. I’m more of a results oriented guy. That being said, I’ve tried the Chocolate Mint and the Mochaccino flavors and was blown away by how good they do taste, especially mixed with fat free milk.

Checking out other review sites, I could not find one bad review on taste in any of the 11 flavors. At Bodybuilding.com every flavor ranked 9.0 or higher from 11,000 users. That really is something.

In terms of mix-ability, it’s very good also. Syntha6 contains Casein, which by nature can be a little “clumpy”. I found that this powder mixes very well in water and milk with no clumping and no grittiness.

By shopping around I found it at up to 45% off on Amazon and Bodybuilding.com. While this brings the price down, the same sites offer similar discounts on other comparable proteins, meaning Syntha6 is still expensive.

Although Syntha6 is a high quality product with some good points, it is expensive and has a lower protein content than other sustained release protein supplements. Added to this, is the higher caloric value (around 100 extra calories per serve) and the lack of information regarding the Amino profile.

I can only recommend it to people who can afford it, aren’t overly concerned with their amino intake or those who believe taste is more important than protein content.