There are so many protein supplements on the market these days, that we are spoiled for choice when it comes to price and flavor for our post workout protein hit.

However, if you are serious about bodybuilding and your health in general, these things must take a back seat to quality and overall ingredients when considering which protein supplement is right for you.

When it comes to quality, price and taste MusclePharm’s Combat Powder is at the top of many peoples list for all three. So with this in mind, let’s take a really close look at Combat Powder and the company behind it to see if the praise is justified.

MusclePharm was founded in 2008 by former professional NFL player Brad Pyatt. Besides his formal education in Kinesiology and sports science, he was mentored by a leading herbalist during his 7 year career.

As a former pro athlete he understands the need for premium nutrition without the use of dangerous chemicals or banned substances.

“To develop and bring to market the most scientifically advanced, safest nutritional and sports supplementation products possible. The purpose of every MusclePharm product must be to enhance athletic performance, strength and overall personal health – all without the use of banned substances. Our team philosophy is that every product will be a formulation that we, as former professional athletes, believe in and use every day.”

With regard to the second award I’ve mentioned, it’s interesting to note that MusclePharm’s EVP and CMO is none other than Jeremy Deluca. If you don’t know, he is the Co-founder and former CEO of……Bodybuilding.com. Read into that what you will.

Okay enough about the company, it’s time to look at Combat Powder itself.

Protein powders are by nature very similar in nature and it is also hard to judge their effectiveness. Diet, physiology and workout capacity all have a bearing on the results of supplementing with protein.

However, MusclePharm Combat really does stand out from the crowd for a couple of reasons.

Each of these have different absorption rates and if not absorbed by your body quickly enough, they will pass through your system as waste.

Literally flushing your hard earned money down the drain.

What MusclePharm has done is blend all 5 of these proteins in smaller amounts to give you a sustained release of protein, fueling growth and repair for up to 8 hours!

BCAA’s help to mobilize protein to where it’s needed and stimulate it’s absorption.

On top of this, they also added a blend of digestive enzymes, again assisting absorption of the protein into your bloodstream.

These are great innovations, with my only complaint being, they don’t list the actual BCAA’s or enzymes included.

This may sound trivial, but if you are already supplementing with BCAA’s, it seems pretty pointless to double up. 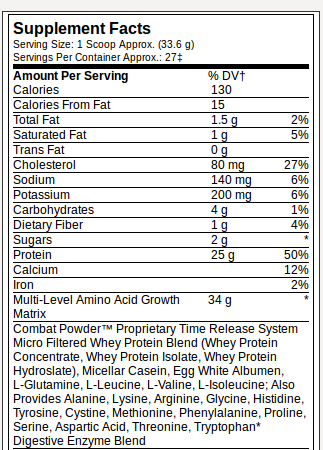 For those of you who are preparing for competition or simply for meal planning, here’s a quick breakdown of the Macros.

Benefit of the doubt time, maybe just a typo on the label.

If you can’t find a flavor in there that suits your taste, you must be hard to please.

One complaint I’ve seen a few times that Combat is way too sweet. If like me you don’t enjoy sweet drinks, mix it with 20oz of water instead of the recommended 16oz.

Here MusclePharm have won a lot of praise. We all know what it’s like to spend 5 minutes shaking the life out of our shake bottles to finally get a shake that’s actually drinkable and not resembling wet sand. Combat mixes very smoothly with none of that grittiness.

Combat comes in 2lb and 4lb tubs and if you shop around they will cost you around $40 and $75 respectively. There are some good promotions out there ,where you can buy Combat for as little as $25 and $40. (www.bodybuilding.com).

So an average price per single serve is between $0.70 and $1.40 depending on the size tub and where you buy it. This makes it about mid range on the price scale.

The key point’s below make it pretty clear why Combat Powder has won so many fans and been propelled to the top of the food chain. (Excuse the pun)

As I said earlier, it’s hard to judge a protein powder’s performance, but Combat Powder has an edge over it’s competition with it’s sustained release formula using 5 protein profiles.

Add to that the BCAA’s (again ignoring the math) , the digestive enzymes, superb mix-ability and competitive pricing, I have no problem recommending Combat Powder to be number one on your “Must try it out” list.