The tagline for the Muscle Synergy pre-workout is “the pumps are just the beginning.” Now we’re not sure what that means, but we love muscle pumps, so we’re curious…

This pre-workout claims to:

Sounds good so far. The claim this product uses “a science-based formula” is also promising. But does it stand up to scrutiny? Read our Muscle Synergy review to found out…

The Beverly International website says the company began life in 1967. Considering we’ve reviewed hundreds of supplements in our time, it’s a little odd we hadn’t heard of them until we reviewed the Lean Out fat burner recently.

The BI About page describes a supplement industry “in a state of scientific and ethical disrepair” when the company started 40+years ago. And it’s clear the company it considers itself something of a savior in the world of fitness and nutrition.

But while it claims to “consistently produce results that exceed consumers’ expectations”, this is news to us.

A look at the ingredients, we see Muscle Synergy contains Creatine and L-Citrulline, which are great pre-workout ingredients. But it also uses at least one ingredient on our must-avoid list.

Niacin is also known as Vitamin B3. It lowers cholesterol and triglyceride levels to help your body convert carbs into energy (and not fat).

This stops the arteries from hardening, which in turn sends vital nutrients to your muscles to help them grow. This is no doubt why many brands load their pre-workouts with it.

In the form of nicotinic acid (as opposed to Niacinamide), the vitamin may cause you to break out in hives or rashes. This is because taking the nutrient releases chemicals called prostaglandins, which your body usually produces as an inflammatory response to injury.

We’re not sure why anyone includes L-Arginine in a pre-workout supp.

Don’t get us wrong – L-Arginine boosts the level of nitric oxide in your blood to give you awesome muscle pumps.

But here’s the kicker…

Your body doesn’t absorb L-Arginine  as well as L-Citrulline.

Why is this relevant? Because when in the blood, your body is able to convert L-Citrulline to the L-Arginine you need much more efficiently.

This ramps up nitric oxide levels in your blood, which then sends vital nutrients to your muscles.

And as Muscle Synergy already contains L-Citrulline, the use of L-Arginine here seems a little pointless. In addition, Arginine is one of three amino acids in Creatine, so there’s even less of a reason to include it in this supp.

HMB became popular in the early 1990’s, with many fitness brands pushing it as the next big thing. It’s thought to improve the effects of weight training, enhance aerobic performance and reduce muscle damage.

One study suggests HMB decreases creatine kinase and therefore reduces muscle damage. However, two other studies show it had no effect on soreness, or on subjects’ perception of workout intensity.

Due to this lack of consensus, we cannot recommend using HMB in your pre-workout.

Now this is better! Creatine is arguably the most tested and reliable ingredients in the world of sports nutrition.

Your body naturally produces Creatine – although only enough of it to last you 3-4 seconds of high intensity exercise. Its main role is to help your body produce adenosine triphosphate (ATP), which you need for energy.

Creatine is a useful pre-workout ingredient because it helps reduce soreness and fatigue to improve your workout performance.

How much Creatine do you need?

In addition to the amounts you get in your diet, we’ve found a daily dose of around 1000-1500mg of Creatine is more than enough to boost energy and give you awesome muscle pumps.

With this in mind, the 3000mg of Creatine in Muscle Synergy is too much for our taste.

Extracted from watermelons, L-Citrulline is a dietary amino acid.

It helps your body produce the nitric oxide it needs to send vital nutrients to your muscles and reduce fatigue during your workout.

But while it’s a great ingredient, its inclusion here puzzles us…

L-Citrulline works best when paired with Malic Acid to form Citrulline Malate. Malic Acid reduces the build-up of ammonia in your body to make you stronger and help fight fatigue even more efficiently.

L-Glycine is an amino acid noted for its ability to improve sleep quality. Beverly International probably includes it here to reduce fatigue, despite the lack of proof it has much use for this purpose.

L-Glycine is one of three amino acids in Creatine. And as this supplement already contains a large 3g dose of Creatine, it seems pointless to include more L-Glycine.

Alongside L-Citrulline and L-Arginine, L-Ornithine is one of three dietary amino acids. It’s said to reduce ammonia (and therefore fatigue) during intense exercise.

One study backs up the claim that L-Ornithine works for this purpose. But at least one other study suggests L-Ornithine may INCREASE ammonia levels in your body during intense short-term exercise. 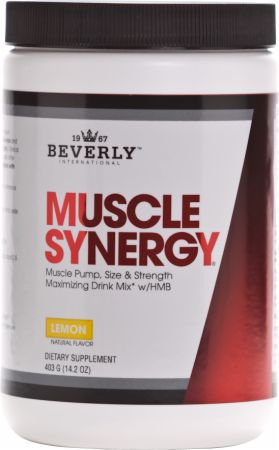 Beverly International Muscle Synergy is safe to use.

It contains some great ingredients, including L-Citrulline and Creatine Monohydrate (our pre-workout favorite).

However, this pre-workout also misses the mark in a few ways…

First, it uses Niacin – we which don’t recommend taking in a supp because it can make you break out in hives or rashes.

Second, the use of L-Arginine is pointless here because this supp already contains L-Citrulline, which does the same job (helping your body produce nitric oxide), only better.

Third, there’s no reason to include L-Glycine in a supp with Creatine. This is because Creatine already contains Glycine – and Creatine does a great job of reducing fatigue without any help.

Can we recommend it?

No. As we said earlier, this isn’t a bad pre-workout. It falls just too short of the mark to recommend it. So we say you should look elsewhere.