Jack3d is one of the most controversial supplements in the industry. It was covered in numerous media outlets in the UK, before being banned in that country (due to being linked with some users’ deaths).

Personally, we’d reccomend checking out safer alternatives in our top three pre workouts page. But as Jack3d is still available in the USA, we’ll continue with this review – and see whether this pre workout really is to blame.

These are mostly the key features you’d want to experience from taking a pre workout so this is good. However, we did notice that Jack3d contains yohimbe, which has been reported to cause numerous side effects…

We’ll examine the nutrient profile of Jack3d in more detail further down in this review.

Due to Jack3d being banned due to very controversial circumstances, USP Labs have been plagued by a bad reputation. This is evident after seeing their ‘statement about government allegations’:

“Regarding the government’s allegations, the Company and the owners vehemently deny that the Company ever attempted to defraud any of its retail customers or consumers, sold any unsafe products, or engaged in any wrongdoing. They expect to be fully vindicated and look forward to their day in court.” – USP LABS.

Anyway, we’re not holding anything against USP Labs in this review. So let’s get on with it, as we’re interested in seeing what this company have changed in their infamous, Jack3d pre workout supplement.

So, we mentioned that since all of the bad press, USP Labs have changed their formula for Jack3d; most notably, they’ve removed DMAA, which has since been banned in certain countries.

However, we’re disappointed to see that USP Labs have kept one thing – a proprietary blend.

We’ll give them credit though; USP Labs haven’t tried to hide their proprietary blend with a fancy name, such as the usual ‘extreme energy giver in my an*s blend’. They’ve simply labelled it as ‘proprietary blend’.

We like to call a spade ‘a spade’, so this isn’t bad. But we always avoid supplements containing these blends, as they don’t show you the exact dosage of the ingredients inside; for example, Jack3d contains yohimbe, but you can’t see the exact amount of it inside this pre workout.

In a nutshell, this increases your risk of side effects (especially as yohimbe has been reported to cause numerous side effects anyway…)

As a result, it’s important that you take a closer look and read our in-depth analysis of each nutrient inside Jack3ed. 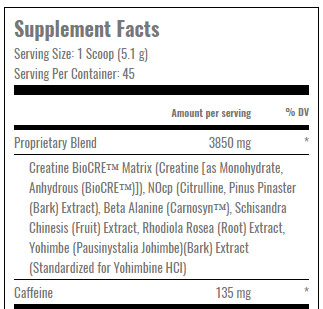 If you want a reliable ingredient that’s proven to work for decades, then look no further. Everyone knows that creatine monohydrate works, and no-one will argue with this fact.

So what does it do? Well, creatine monohydrate is able to improve your strength and endurance in the gym (which are 2 great features to help you make more progress on your fitness goals).

However, as it’s in a proprietary blend, it might not work – studies show that you need at least 1,000mg creatine monohydrate to experience its benefits.

As a result, this is a prime example of why we don’t like these blends (you simply can’t see the dosages of ingredients inside).

Now, this is simply another form of creatine. There’s no need to have them both here, and if we had to choose, we’d go for creatine monohydrate every time.

If you’re wondering what this is, creatine anhydrous is basically the same as creatine monohydrate but in a completely dehydrated form (but it hasn’t shown to be more effective).

Citrulline is usually one of our favorite ingredients inside a pre workout supplement. Why? Because it’s able to improve your blood flow and enhance your muscle pumps when dosed correctly.

But as you should know by now; the problem is that citrulline is inside a proprietary blend (meaning Jack3d isn’t likely to contain an effective dosage).

In case you’re wondering what this is – pinus pinaster extract is just a fancy name for pine bark extract.

However, the problem is that no study has shown that pinus pinaster extract can actually deliver benefits at all; this means that it’s a useless addition to Jack3d.

Beta-alanine is a molecule that’s shown to improve your endurance in the gym. Sounds good so far right? Well, it also causes a side effect called paresthesia.

If you’re wondering what this is; paresthesia is a tingling on the skin of your face, chest, body and extremities – something you don’t want to suffer from while training in the gym.

As a result, we always choose to avoid pre workouts containing beta-alanine.

In a nutshell, this is a fruit that’s also known as magnolia berry, native to northern China and Russia. While it can be beneficial when used as an anti-inflammatory or to improve your digestion, schisandra chinensis doesn’t deliver any benefits to improve your gym sessions.

Finally, a good addition to a pre workout. rhodiola rosea is one of our favorite additions to these types of supplements, as it’s able to improve your focus in the gym.

But that’s not all; we like rhodiola rosea as it’s also shown to reduce fatigue too – this is a great benefit, as it keeps you from crashing half-way through your gym session.

However, again, the problem is that rhodiola rosea is inside a proprietary blend. So no-one knows whether this has been dosed effectively or not.

If you’ve taken gym supplements before, then you’ll have heard of yohimbe before. It’s basically an alkaloid extracted from a tree native to Africa.

But the problem is that yohimbe has been reported to cause many side effects (yohimbine, which is structurally very similar to yohimbe has already been banned, so we’re expecting this to follow suit soon).

Not only that. the main benefit of yohimbe is that it’s believed to promote fat loss – which isn’t a direct benefit from taking a pre workout supplement (meaning it’s not even needed here).

As a result, we always recommend you to avoid supplements containing yohimbe.

Caffeine is the only ingredient in Jack3d that’s not been added into the proprietary blend. As a result, we know the exact dosage inside – 135mg, which is a good, sensible dosage.

This means that you’ll avoid side effects such as jitters from the caffeine inside. But unfortunately, as Jack3d contains yohimbe, you’re still at risk of other side effects here.

The last bullet point above is ‘likely to cause side effects’, and for good reason – because Jack3d contains yohimbe, which has reported to cause many side effects in the past.

However, in all fairness to Jack3d, none of the ingredients inside are likely to kill you.

Not what you’re looking for? See Our
– Top Three Pre Workouts Here –

In conclusion, Jack3d isn’t going to kill you, so you don’t have to worry about that. However, it does contain an ingredient that’s been reported to case numerous side effects – yohimbe.

Not only that, all of this pre workouts ingredients are contained in a proprietary blend. So as the dosages of each ingredient is hidden from you, this increases your risk of suffering from side effects.

In a nutshell, we always recommend you to avoid supplements containing proprietary blends for this reason.