Both Stoppani’s physique and his obvious knowledge of the subject are impressive. But the Alpha Jym formula has been the same for a few years now.

With this in mind, we’re keen to see whether it’s still good, or if it’s starting to look tired among the new breed of test boosters? Let’s find out…

With a PhD in Exercise Physiology from the University of Connecticut, Stoppani can legitimately claim to be an expert in his field. For this reason, his company should be ideally-placed to create some awesome products.

Stoppani also hates proprietary blends – which is always great to see. But while the buff doctor claims to stand by every product that bears his name, we couldn’t find any money-back guarantee on either the product website or any third-party retailers.

Ingredients and How They Work

Right off the bat, we can see Alpha Jym contains a couple of potent T-boosters in Fenugreek and Ashwagandha.

Yet of the six ingredients, we also find at least three that are understudied. For example, the research on Damiana uses rats – not humans – as subjects. 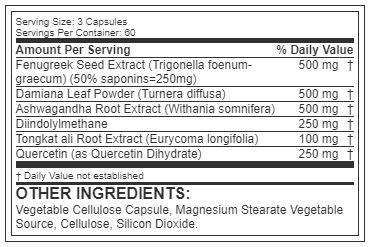 Fenugreek is a herb that boosts testosterone, enhances sex drive, and helps users cut fat. It works by regulating blood sugar, which reduces levels of the sex hormone binding globulin (SHBG). This in turn makes more testosterone freely available in your body.

The issue with getting Fenugreek in your diet is that it’s used almost exclusively in Indian cuisine. But while curries are tasty, many are also rich in fat. So to feel all the herb’s benefits without putting on extra weight around the gut, it’s best to take Fenugreek in a supp.

And as a noted adaptogen, Ashwagandha also reduces anxiety, due to its ability to lower cortisol levels in the blood.

And as research shows a direct correlation between high cortisol and low T, Ashwagandha is surely one of the most potent natural testosterone boosters available.

Damiana is a wild shrub found in Central America, Mexico, and the West Indies. In the US, marketers first hawked Damiana as a cure for impotence in 1976.

But what does the science say?

Stoppani says Damiana “has been shown to inhibit the aromatase enzyme” which converts testosterone into estrogen. In truth, this wouldn’t directly increase T, but it could benefit those with high levels of estrogen.

However, the limited research on Damiana’s T-boosting effects appears to dismiss the notion that the herb boosts testosterone.

One study, published in the BMC Complimentary Alternative Medicine, found that a mix of Damiana and several supposed T-boosters failed to raise T.

Meanwhile, research on Damiana’s aphrodisiac qualities remains confined to rat studies. The lack of human research appears to give lie to the claim that JYM Supplement Science products are backed by solid testing.

But as Damiana is so understudied in humans, it’s impossible to say for sure whether Damiana increases levels of the female hormone – but the presence of an estrogenic compound may be a cause for concern if you’re looking for a surefire way to increase T.

As a result, it’s disappointing to see Damiana in a product billed as a test booster.

Foods rich in Diindolylmethane (DIM) include broccoli, cabbage, and cauliflower. As a component of Indole-3-Carbinol (I3C), it’s said to have a powerful effect on estrogen metabolism, which then boosts the amount of free T in the body.

Tongkat Ali is a Malaysian herb that has been used for centuries to combat stress and improve strength. In recent times, a number of nutrition brands sell it as a T-booster in both powder and capsule form.

There’s a decent amount of evidence to suggest Tongkat Ali can enhance sex drive. The ingredient contains the compounds eurycolactone and eurycomaoside, both of which appear to improve aspects of sexual performance.

It’s thought these bioactive compounds raise levels of CYP17, which in turn could allow the body to convert other hormones into testosterone.

The issue with Tongkat is the vast majority of studies have used male rats – rather than humans – as subjects.

In one of the very few reliable human studies, which focused on its effects on athletes, results showed no significant change in T after six weeks.

Quercetin is a bioflavonoid found in apples, onions, grapes, and red wine.

Stoppani claims to include Quercetin in the Alpha Jym formula because it blocks the enzyme UGT2B17, which can prompt the body to excrete testosterone through urine.

But yet again, the issue with this claim lies in the lack of human studies – all of the available research on the T-boosting effects of Quercetin focuses on rodents.

But we should mention what it doesn’t have. After all, with only six ingredients, there’s still plenty of room for more.

Here are just two ingredients that would improve the current Alpha Jym formula:

Vitamin D3: Actually more of steroid hormone than a vitamin, D3 is proven to increase testosterone, increase muscle mass and raise power output. This is such a great ingredient that we tend not to trust any test booster without it.

D-Aspartic Acid (D-AA): Something of a new kid on the block in bodybuilding circles, D-AA has been shown to raise T by up to 45.5% in only 13 days.

All of the ingredients in Alpha Jym are safe to take.

Alpha Jym contains some good ingredients, but falls short of being the “revolutionary” formula that Jim Stoppani claims it is.

We see the likes of Ashwagandha and Fenugreek in some of the best T-boosters out there. And it’s certainly a real plus that you can see exactly what you’re getting with each serving – Stoppani stays true to his hatred for proprietary blends, which is great.

However, Alpha Jym is missing a few key testosterone boosting ingredients. This supplement would be much improved with the addition of Vitamin D3, D-Aspartic Acid, and even Panax Ginseng.

And while the man behind the brand has a PhD, Alpha Jym lacks the weight of scientific backing. This is disappointing to see from such a knowledgeable guy.

When Alpha Jym first came out a few years ago, we were quite impressed. Despite its failings, it carried more weight than much of the snake oil the fitness industry was still peddling.

But times change and test boosters keep getting better – it’s just a shame Alpha Jym failed to keep up. This is especially true in light of new research and the emergence of more key ingredients.

With all of this in mind, we suggest you look for something better and more up to date.