This caught our attention by being low-key…pretty strange right? We’ve reviewed many of the most popular supplements, so it’s about time we found out whether the smaller products had any chance of beating them.

If this fat burner manages to deliver all of these benefits, then it’ll be able to compete with some of the best fat burners out there. However, we’ll be checking the ingredients and their dosages inside to see how effective this Ab Igniter is, before we make our final decision.

Ab Igniter is one of the lesser-known fat burners on the market.

It’s priced reasonably, so it’s not going to burn too much of a hole in your pocket, but from first glance, it doesn’t appear to contain very good ingredients either.

You can see just by looking at the supplements fact of Ab Igniter that it’s overloaded with ingredients. This isn’t a good thing, as it’s unlikely that companies will add more ingredients while dosing them correctly too.

Not only that, the highest dosage of ingredients in Ab Igniter is 250mg per serving; considering green tea extract’s optimal dosage is 500mg, this isn’t great news.

We’ll tell you everything in this section below…see for yourself: 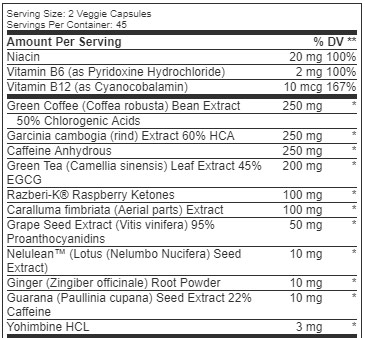 This is a great start by Top Secret Nutrition, as it’s known for being very effective at promoting fat loss. It works due to containing high amounts of chlorogenic acid, which works as a thermogenic to raise your metabolism.

When we mentioned that Ab Igniter contained some controversial ingredients, garcinia cambogia was definitely one of the ingredients we were referring to.

As a result, it’s important to know that garcinia cambogia is an ineffective ingredient that’s not shown to help you shred body fat.

Caffeine is the best stimulant you can find in supplements, as it’s the pure form of the stimulant.

However, as you know after consuming too much coffee, it’s not a very good idea to consume too much caffeine at once; inevitably, this will cause side effects like jitters.

As a result, we always recommend that you intake less than 200mg caffeine at once. Unfortunately, Ab Igniter contains a big 250mg caffeine dosage, putting you at risk from suffering side effects.

Caralluma fimbriata is believed to be an appetite suppressant, but while early studies have been successful, there haven’t been enough for it to be reliable yet.

Even if you don’t know much about nutrition, you’ll no doubt know about how healthy green tea is for you.

But most importantly, studies have shown that green tea extract is able to promote fat loss by boosting your metabolism – making it a great addition to Ab Igniter here.

But the bad news is that Top Secret Nutrition has underdosed this ingredient; the same studies show that you need at least 500mg green tea extract for it to work.

As there’s only 250mg green tea extract in Ab Igniter, it’s not very likely to be effective here.

Raspberry Ketones is another controversial ingredient, as it’s not proven to be very effective in scientific studies – although there were also rumours about this ingredient being able to deliver great effects.

We’re not sure why Top Secret Nutrition has added grape seed extract into this fat burner, as it’s known for being able to increase your blood flow – which will have a positive effect on your muscle pumps while lifting weights.

As a result, it’s not a very good addition to Ab Ignite – we would have preferred to have seen a bigger dosage of green tea extract instead.

Guarana seed extract is another stimulant that’s believed to work in a similar way to caffeine.

However, remember that Ab Igniter already contains a huge dosage of guarana seed extract – meaning this only increases your risk of suffering from side effects like jitters and energy crashes.

Yohimbine has actually been banned from use in a few countries due to causing side effects on a regular basis. As a result, we recommend that you stay away from products containing yohimbine for your own safety.

Not only that, we also recommend that you stay away from yohimbe bark extract too; this contains high amounts of yohimbine, but is still legal to be used in almost every country.

The only good news is that there’s only a tiny amount of yohimbine in Ab Igniter – 3mg. So it’ll actually be good if this proves to be ineffective here. 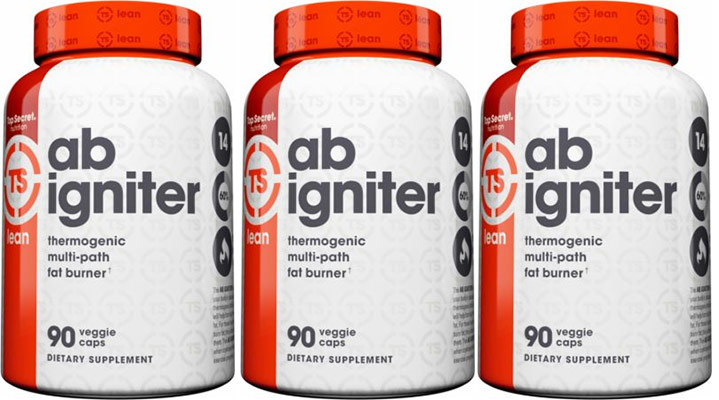 The worst addition to AB Igniter is definitely yohimbine, as it’s been banned in certain countries due to causing side effects.

But there’s also the risk of jitters and energy crashes due to containing 2 stimulants – caffeine anhydrous and guarana seed extract. As a result, it’s a good idea to choose fat burners that only have 1 stimulant (with under 200mg caffeine per serving to stay away from jitters).

See the possible side effects with Ab Igniter:

At first glance, Ab Igniter seems to come at a very reasonable price. However, once you look at the ingredients and their dosages inside, you can see why…

But the worst part is that Ab Igniter contains some potentially harmful ingredients like Yohimbine, along with the overload of stimulants.

As a result, you would get much better results and value for money by looking at the best fat burners available instead.