Alpha Lean-7 has been getting a lot of good reviews online. So we thought it was about time we check it out.

The claim to “initiate a violent assault” worries us a bit – when it comes to looking after your body, violence is never the answer. The bottle also carries a warning: “FOR EXPERIENCED USERS ONLY.”

But aside from the hype and the worrying warnings, this fat burner offers the kinds of benefits you want in this type of product – but does it work? Find out below…

Until we started this Alpha Lean-7 review, we’d never heard of Hard Rock Supplements. It doesn’t appear to have its own website and we can’t tell whether it’s an actual company, or if it’s just a front for a couple of spotty teenagers playing fitness nutrition in their mom’s basement.

According to a bio we found on strongsupplements.com, Hard Rock Supplements was an “overnight success” and sells products in over 115 countries.

Almost all supplements carrying the Hard Rock Supplements name carry warnings along the lines of “FOR ADVANCED USERS ONLY.”

Alpha Lean-7 Review: The Ingredients and How They Work

The first thing we noticed about this product is that it’s just one big ol’ proprietary blend.

Reminder: Proprietary blends are sub-formulas that list ingredients, but hide their dosages. We hate proprietary blends because they allow companies to charge high prices for underdosed and low-quality supplements. 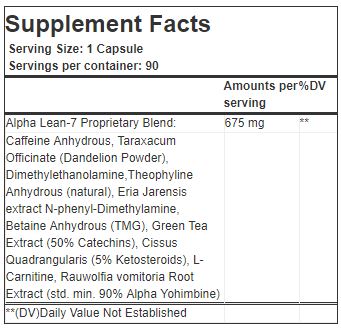 Despite making Caffeine part of a proprietary blend, Alpha Lean-7 is off to an OK start with this awesome stimulant. Found in almost all fat burners (and rightly so), Caffeine has several benefits for those looking to burn fat…

First, it replaces the energy you lose when you reduce your calorie intake. Second, Caffeine has a mild thermogenic effect, which means it raises your body temperature to force your system to burn more calories. And third, it helps prevent water retention, which can lead to visible weight loss.

The issue here is that we don’t know how much Caffeine is in this fat burner. It’s possible the stimulant constitutes nearly all of the 675mg proprietary blend, in which case, it could give you jitters, especially in one serving.

Dandelion contains a number of nutrients said to have a “detoxifying” effect. These include Vitamin C, B6, Calcium, Iron, and Magnesium.

But can Dandelion burn fat?

Well, one study showed that when subjects took 8ml of Dandelion Extract, they tended to urinate a lot more.

While you may experience short-term weight loss by passing water more often, you will soon return to your previous weight as soon as you take a drink.

So despite claims these nutrients can induce weight/fat loss, the science doesn’t back this up.

Dimethylethanolamine (DMAE) is a compound that’s frequently used in cosmetics to tone and tighten the skin. And you’ll often find it in fat burners for its supposed ability to boost focus and reduce binge-eating.

The notion that DMAE improves cognition comes from the fact that it’s similar in structure to Choline, a well-known nootropic. However, there is little evidence to corroborate this.

There’s even less evidence that DMAE can lower the chances of binge-eating – this notion comes from the idea that the molecule improves subjective well-being, and therefore helps stem compulsive behavior.

But this is all just conjecture – and not enough to justify the use of DMAE in a fat burner.

Taken from Green Tea leaves, Theophylline is a compound discovered by Albrecht Kossel in 1888. It is primarily used to treat breathing problems, such as asthma and infant apnea.

Some research suggests Theophylline can also block the adenosine receptors (which make you sleepy). It’s likely whoever concocted the Alpha Lean-7 formula included this compound to help improve focus.

However, this compound is understudied – and as this fat burner also contains Caffeine, the use of Theophylline may be pointless.

The blurb for Alpha Lean-7 says Eria Jarensis is included to “help produce a ‘euphoric’ feeling” and to “increase energy”.

This ingredient is also known as N-Phenyl-Dimethylamine – and some claim that it boosts energy enough to enhance gym performance. However, the limited research on the subject shows no improvements in endurance, speed, or stamina.

There are also claims that Eria Jarensis has a thermogenic effect. But while one study showed a slight reduction of fatty acids, this decrease was insignificant.

One, Betaine does not burn fat. The guys behind Hard Rock Supplements say they use Betaine to reduce appetite and improve muscular endurance. But there’s ZERO evidence to support these claims.

And two, Betaine can cause your breath and body odor to smell like rotten fish.

In fact, we’ve never seen Betaine in a fat burner before – it’s usually a pre-workout ingredient. So not only is it useless and in the wrong type of supplement, but it can also make you stink. Not good.

Now – this is a bit more like it! Green Tea is a made from the camellia sinesis shrub, which is found in East Asia.

It contains active ingredients called catechins, which stimulate the release of norepinephrine. This powerful stimulant has a thermogenic effect on your body; it raises your body temperature and heart rate to break down more energy, which leads to fat loss.

We’ve found 500mg of Green Tea to be the perfect amount to burn fat.

But as the Green Tea in Alpha Lean-7 is part of a proprietary blend, there’s no way to tell whether there’s enough of the nutrient to advocate parting with your hard-earned cash.

Grown in Asia and Africa, Cissus Quadrangularis is used in Alpha Lean-7 to “support metabolism and muscle preservation during times of caloric deficit.”

But while 300mg of Cissus may induce weight loss due to appetite suppression, this is only true in obese subjects. And despite Hard Rock Supplements’ claims to the contrary, Cissus has no direct impact on fat loss.

L-Carnitine is one of our favorite ingredients – but we’re still disappointed to see it here.

The compound improves focus and reduces fatigue and muscle soreness, which is why you’ll find it in at least one of the best pre-workouts on the market.

But as a fat burner, it ain’t so good.  There’s some evidence that L-Carnitine can reduce fat mass, but this is only true in elderly people. In truth, the compound does not burn fat in young or otherwise healthy subjects.

Rauwolfia Vomitoria is the active ingredient found in the Rauvolfa Tree (also known as the Poison Devil’s Pepper). This ingredient has a stimulant effect very similar to Yohimbine. In fact, the label states this ingredient is 90% Alpha Yohimbine.

As an alpha-2 antagonist. As the Alpha-2 receptors tell your body to store fat, it would seem to make sense that inhibiting these receptors leads to the breakdown of fat. However, there is very little evidence of this.

Aside from its POSSIBLE (rather than ACTUAL) benefits, Rauwolfia Vomitoria is possibly unsafe; the root extract has been linked to a range of unpleasant side effects (see below). 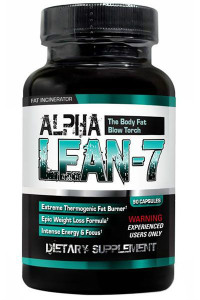 Side Effects: Is Alpha Lean-7 Safe?

Alpha Lean-7 is largely safe to take. However, Rauwolfia Vomitoria (a close relation of Yohimbine) may cause a range of health issues: These include:

Rauwolfia Vomitoria may also be unsafe to take during pregnancy (linked to birth defects).

Betaine may also cause you to develop fishy breath and body odor.

Hard Rock Supplements’ fat burner is quite a popular product – but at no point during this Alpha Lean-7 review could we work out why.

First off, the Superior Labs product is one huge proprietary blend. And we – and plenty other experts – hate proprietary because they give manufacturers a license to cheat customers out of their hard-earned money.

We can’t say for sure whether Superior Labs does this because the lack of dosage info gives you no way to tell either way.

But most of the ingredients in this supplement are either untested (Dandelion Powder), disproven (Eria Jarensis), or potentially unsafe  (Rauwolfia Vomitoria). With all of this in mind, we recommend you avoid Alpha Lean-7 and look for a clean, safe alternative.