Tek Naturals’ BurnerTek Fat Burner is similar in both ingredients and price to some of the best supplements of its kind.

We’re intrigued. Let’s find out more in our BurnerTek review…

On its About page, Tek Naturals claims to be “the NO B.S. Supplement Company.”

The guys at this company also promise “no gimmicks, no hype.”

They then brag that their products are not only “the real deal”, but are also “[lower in price] than our competitors because we desire a long-term relationship with our customers.”

Cheap shots at a respected company

Tek Naturals takes a cheap shot at Roar Ambition’s Instant Knockout when it says “we don’t create bottles and packaging that are in the shape of a fist.”

The company also loudly claims to shun what it calls “disingenuous marketing” to pass savings on to the customer.

Is this a sign Tek Naturals’ “NO B.S.” claims don’t hold water?

And what’s its problem with Roar Ambition?

A big company with an original product surely wouldn’t be so brazen to attack a ‘rival’ – would it? We’re starting to smell a rat…

BurnerTek contains the perfect amount of many fat-burning ingredients we love.

In fact, it’s ALMOST identical to Instant Knockout – with a couple of suspect ingredients thrown in to distinguish it from the market leader. 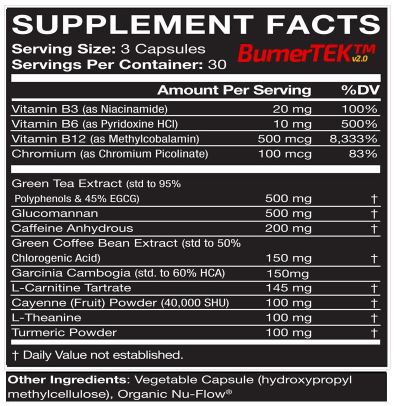 Packed with polyphenols (a type of antioxidant), Green Tea is great for your health. In fact, it has a positive effect on every part of your body.

But for all its potent ingredients, the herb is richest in catechins.

And these catechins are what ensure Green Tea packs such a potent fat-burning punch.

How does it work?

Catechins stimulate the hormone norepinephrine to ramp up your body temperature and heart rate.

As your body scrambles to return to the right temperature, it burns fat for fuel to help you fight the bulge.

Glucomannan derives from the konjac plant, found in the tropics of eastern Asia.

When you eat this dietary fiber, it takes on a gel-like texture and swells in the stomach to make you feel full.

Studies show Glucomannan can lower your cholesterol and help you lose weight with or without working out.

You no doubt know Caffeine is a stimulant that can help you power through your workouts – but it’s also an awesome fat burner.

When you start a low-calorie diet, the shock to your system can actually slow down your metabolism. Meanwhile, the relative lack of calories can also make you feel tired and unmotivated.

The right dose of Caffeine not only restores your energy, but also boosts your metabolic rate to give you all the upsides of limiting your calorie intake without the downsides.

You notice we said right dose?

This is where BurnerTek misses the mark…

Having tested hundreds of supplements in our time, we’ve found 350mg of Caffeine Anhydrous gives you the most fat-burning power.

Any more and you may get the jitters and lose focus. Any less and you could fall flat and fail to hit your goals.

As this supp contains just 200mg of Caffeine, BurnerTek ensures you’re LESS likely to get the boost you need from the stimulant.

Green Coffee Beans are unroasted, which is one of the ways they’re different to their brown cousins.

These beans are rich in chlorogenic acid. This active ingredient not only reduces sugar cravings, but also boosts glucose metabolism. This in turn allows your body to convert more glucose into energy and stops the build up of fat.

But here’s the gripe…

It’s never enough to put great ingredients in a supp and hope for the best. To burn fat, it’s vital you get the doses right. And in the case of Green Coffee Extract, 100mg is optimal.

So while we’re always pleased to see this nutrient in a fat burner, there’s TOO MUCH Green Coffee Extract in BurnerTek (150mg). As a result, it could fail to give you the results you’re looking for.

Up until now, we’ve had only good things to say about the ingredients in BurnerTek (bar a few dose issues). But this just spoils it…

Also known as Garcinia Cambogia and Malabar Tamarind, some believe this fruit to be a fat-loss aid and an appetite suppressant.

This belief stems from how its active ingredient – hydroxycitric acid (HCA) – seems to block the citrate lyase enzyme, which the body uses to make and store fat.

It works in rats, but does it work in humans?

Garcinia became famous in the 1970s, after one study showed it could reduce food intake and fat mass in rats.

Despite this, later research proves Garcinia DOES NOT burn fat in humans. And that’s not all…

In 2009, the Food and Drug Administration (FDA) warned the public to stop using supplements containing Garcinia Cambogia due to links with liver damage in some users.

It may also interact badly with asthma and diabetes medicines, as well as blood thinners and iron supplements (for anemia).

So it’s not only useless – it also poses potential risks to your health.

As a result, seeing Garcinia Fruit Extract in this fat burner is a bit like finding a floater in a punch bowl.

And it was all going so well…

L-Carnitine is an amino acid known for its power to give you laser focus, raise your energy and repair muscle tissue – and this is why we love it in our pre-workout supps.

But it is good a fat burner?

As for lifters and otherwise healthy people? Well, the results of the three available studies suggest L-Carnitine will not help you shed the chunky excess.

Also known as Bird Pepper, Cayenne Pepper derives from the Capsicum Annuum plant in South America. The fruit is rich in capsaicins, which lends it both its spicy taste and its potent fat-burning pproperties.

In fact, Cayenne Pepper is one of the most powerful thermogenics out there.

When you eat the fruit, its active ingredients cause your body temperature and heart rate to surge. This speeds up your metabolism and helps you burn fat faster.

The mix of L-Theanine and Caffeine is known as ‘Smart Caffeine’ due to the way it offers all of the benefits of Caffeine without the jitters you get from taking too much of the stimulant.

Yet as BurnerTek (v.2.0) contains just 200mg of Caffeine, it’s unlikely to cause anxiety (with or without a calming agent). And as a result, L-Theanine takes up unnecessary space in this supp.

Turmeric is developing quite a reputation as a thermogenic. And there is some evidence it can help balance estrogen levels and reduce fat-cell inflammation.

We’ve seen it more often in fat burners for women than those for men (or those with everyone in mind).

But until more research on the subject comes to light, there isn’t enough evidence to justify using Turmeric in a universal fat burner. 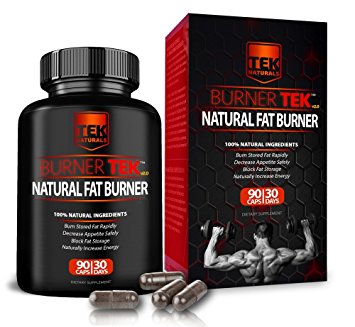 As you’d expect from a fat burner that so closely copies the market leader, most of the ingredients in BurnerTek are safe to use.

However, Garcinia Fruit Extract (or Garcinia Cambogia) may cause serious liver complaints.

This is why the FDA began advising people to avoid the herb in 2009. The National Center for Biotechnology Information (NCBI) also refers to Garcinia Cambogia as a “dangerous dietary supplement” in a 2016 study.

Other side effects of Garcinia Cambogia may include:

Some evidence suggests Garcinia Cambogia could interact badly with medications for diabetes, asthma, high cholesterol, and psychiatric conditions. There are also reports of bad interactions with blood thinners, pain medications and iron (for anemia).

Tek Naturals loudly calls itself  “the NO B.S. Supplement Company” – and this got our hopes up as we began this BurnerTek review.

A scan of the ingredients shows BurnerTek contains proven ingredients that would work great as part of the ultimate fat-burning formula. For example, you’ll find Caffeine Anhydrous, Glucomannan and Cayenne Pepper in some of the best-researched fat burners out there.

However, BurnerTek contains too much of some ingredients (Green Coffee Extract) and not enough of others (Caffeine) to give you optimal results.

But the complaints don’t end there…

We thought it may be just a coincidence that BurnerTek is so similar to Instant Knockout. However, Tek Natural’s About page reveals a different agenda: to undermine the market leader.

Amid cheap shots about Instant Knockout’s fist-shaped bottle, Tek Naturals cries about what it calls “disingenuous marketing” and claims to price its products at a lower price than its competitors.

Whereas Roar Ambition and its Instant Knockout fat burner enjoy great reputations all over the world, the guys at Tek Naturals clearly feel they have something to prove.

A reputable company surely wouldn’t need to make such cheap and obvious shots at a rival.

Besides, the addition of a useless – and potentially dangerous – ingredient like Garcinia Fruit Extract suggests BurnerTek is nothing more than a bad imitation of a great product.

We suggest you ignore the pretenders and pay less for the real deal.