When we started this Capsiplex review, we expected it to be a different product to Capsiplex Sport.

But from what we can tell, the only difference is the Sport version adds L-Arginine. Tap the link to read our Capsiplex Sport review.

Capsiplex claims to help you:

That all sounds pretty good to us, but we’re very skeptical about the “extra 278 calories” claim. Let’s see what Capsiplex can do…

Bauernutrition.com is actually a front for a company called Wolfson Berg Limited.

Wolfson Berg calls itself a “trusted name that takes pride in leading the supplements industry for over a decade.”

According to the info on wolfsonberg.com, over 100 brands in 10 countries across the world “rely on [the company] for all of their supplement consultancy, manufacturing and private labeling needs.”

Wolfson Berg’s headquarters are in Cyprus.

Capsiplex contains a 500mg proprietary blend – it’s not clear whether the other six ingredients on the label are part of that blend, or whether those ingredients are separate from the blend.

Regardless, we hate proprietary blends. This is because they allow companies to hide vital dose info, while also making big claims that are impossible to analyze.

Caffeine is a popular stimulant used by millions across the world.

After decades of scientific research, it’s arguably the best-tested and proven stimulants – as a result, you’ll find it in some of the best fat burners on the market.

The stimulant works by antagonizing the adenosine receptors. As adenosine is the chemical responsible for making you feel sleepy, inhibiting its receptors produces the opposite effect.

Caffeine replaces the energy you lose when you lower your calorie intake, so you feel strong and alert all day.

It also has a thermogenic effect on your body, meaning that it heats you up and forces your body to burn more calories to return to normal.

That’s as long as you get the dose right…

To help burn fat and boost energy, you need at least 300-350mg of Caffeine per day – and this should be split between 3-4 servings. This highlights two issues with Capsiplex…

First, a daily dose of 138mg is nowhere near enough the optimal dose, which makes it less likely you’ll experience any real benefits from the stimulant.

Second, this supplement provides a daily-serving size of just one capsule per day.

That’s quite a hit to get in one go, especially considering this supp doesn’t contain any L-Theanine (which softens the speedy effects of Caffeine). Such a high dose may make you feel jittery and anxious, particularly if you’re sensitive to stimulants.

Capsicum Annuum L. is a species of plant that includes all different kinds of peppers, from the unspicy bell peppers to the hot ‘n’ spicy Cayenne Pepper.

Capsiplex claims to help burn more calories through thermogenesis, so it’s easy to assume this fat burner contains a spicy pepper, as these types contain the active ingredient capsaicin, which has a proven thermogenic effect.

Some online sources claim ordinary bell pepper has a ‘mild thermogenic effect’ despite the lack of capsaicin – but there’s no evidence of this, besides hearsay.

As the label doesn’t specify which form of Capsicum Annuum L. is used here, there’s no way to be sure it’s worth your money.

Were the makers of Capsiplex having an off day?

We’re going to be charitable here and assume whoever listed these ingredients was having a bad day. But looking at the label, it doesn’t feel like the makers put much effort into devising the formula.

Also known as Nicotinic Acid and Vitamin B3, Niacin is an essential nutrient.

However, research shows that, even at high concentrations (500-2000mg), Niacin does not reduce fat mass. In fact, one study even suggests the nutrient reduces insulin sensitivity, which is the opposite of what you want if you’re trying to lose weight.

Piperine (aka Black Pepper) has mild thermogenic properties. However, its main purpose is to increase the level at which the body absorbs other nutrients in a multi-ingredient supplement.

But apart from Caffeine and (possibly) Capsicum Annuum L., there is very little here that burns fat or boosts energy, so Piperine may be wasted here.

Some online sources claim Brown Rice helps burn fat. But from what we can tell, this only applies to the benefits of swapping white rice for brown rice.

As a result, there is no evidence that it actually burns fat. And Magnesium Stearate is nothing more than a cheap anti-caking agent that offers no benefits to those seeking to lose weight or shed fat. 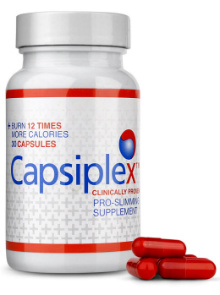 The six ingredients in Capsiplex are safe to use (unless you’re allergic to any of them).

To sum up our Capsiplex review – this is not a good fat burner.

It does contain Caffeine, which is an awesome fat burner and energy booster. The Bauer Nutrition product also contains some form of pepper, which may burn fat.

On the other hand, we can’t be sure what type of pepper Capsiplex uses as it doesn’t tell us on the label. This is because the Capsicum Annuum L. species encompasses fruits that burn fat (the spicy ones) and those that don’t (the unspicy ones).

Everything from the paltry number of ingredients (only six!) to the proprietary blend are major signs that not a lot of thought went into this product –  and don’t even get us started on the spelling mistake on the label!

Ignore Capsiplex and look for a fat burner with ONLY proven ingredients.