Cellucor are a powerhouse in the supplements industry, so when they release a supplement, you have to take a look. SuperHD Fire is one of the most expensive fat burners on the market, so let’s see whether it can beat the highest rated fat burners available.

An interesting feature of SuperHD Fire which helps to set it apart from other fat burners, is that it comes with 2 different formulations; one set of pills are speficially designed for use in the morning, while the others are designed to be taken in the evening.

We’ll be taking a look to see whether this seems more effective to work, or whether it’s simply seems like a gimmick to increase sales.

As we’ve already mentioned, Cellucor are giants in the supplements industry. They’ve been around since 2002 and have since released some of the most popular products on the market.

While Cellucor are probably better known for their pre workout supplements, they’re making waves with their higher priced products such as SuperHD Fire.

As Cellucor deserve respect, we always check to see whether their new supplements live up to their reputation. As SuperHD Fire is priced so highly, we’re keen to take a closer look to find out whether it’s worth the cost.

SuperHD Fire is an interesting fat burner, as it comes with 2 different pills designed to be taken separately; one in the morning, and the other in the evening.

It’s not often that fat burners are made this way, but it might not have been a bad idea if the evening pill didn’t contain caffeine – but it does.

Anyway, you’ll find out about this and more in this section below. See for yourself: 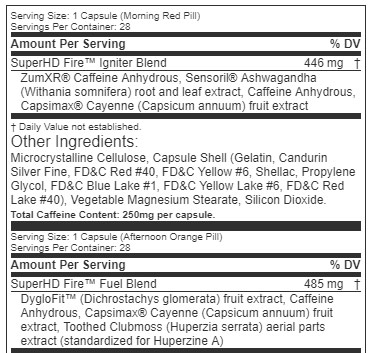 When it comes to stimulants, caffeine anhydrous is the safest and most reliable option. Think about it, countless people around the world consume it through tea & coffee everyday – without suffering side effects.

Alright, so let’s get this straight; when consumed in moderation, caffeine is free from side effects. But if you drink too much, coffee, you’ll experience jitters and crashes.

The same goes for when supplements contain too much caffeine per serving. The worry is with SuperHD Fire, as each nutrient is in a proprietary blend, you don’t know the dosages of them, including caffeine.

As a result, we’re unable to see how much caffeine you’re consuming each time, putting you at risk from side effects. We’re still suprised that the evening pill contains caffeine, as this puts you at risk from being kept awake at night.

Not only that, ZumXR is a patented version of caffeine anhydrous; this means that SuperHD Fire contains 2 stimulants in 1 pill here, putting you at increased risk of suffering jitters. It would have been wise for Cellucor to provide you with the caffeine dosage, to make sure you knew it was safe, instead of going in blind.

This is a herb used in traditional Indian medicine that’s thought to improve your strength. Studies have backed this-up, making it an effective ingredient at boosting your workouts.

But the problem is that ashwagandha isn’t really needed in fat burners, as it hasn’t shown to promote fat loss. So this is simply a useful extra to have in SuperHD Fire.

We would have preferred something reliable at helping you lose body fat like green tea extract instead.

In terms of fat burning ingredients, cayenne pepper extract is the best in SuperHD Fire. It’s tried-and-tested when it comes to firing up your metabolism, and we challenge you to try eating a cayenne pepper without sweating buckets.

The beauty of having this in a fat burner, is that you don’t need to taste the ‘spice’ and still benefit from it. Good job by Cellucor here.

This is the ‘evening’ pill and contains slightly different ingredients to the morning serving.

We thought that Cellucor would have taken out caffeine altogether in this pill to avoid any risks of keeping you up at night, but they’ve simply removed the ‘ZumXR caffeine anhydrous’ from it, leaving the unpatented form of caffeine anhydrous inside.

But we can only imagine that Cellucor would have done their research and thought the added nutrients in this evening pill were more effective when taken later on in the day.

This is another patented ingredient, and it’s a form of dichrostachys glomerata. It’s believed to have a positive effect on fat loss, and you can’t really argue with the studies that back-it-up.

In fact, it seems so good that we’re suprised that Cellucor didn’t add this into the morning pill too.

Ultimately, this seems like an effective ingredient that helps you burn fat. However, the studies we’ve seen suggest that you need to consume 300mg per serving; as it’s in a propretary blend, you’re left guessing how much is contained in SuperHD Fire.

As we mentioned, caffeine anhydrous is usually the best stimulant in fat burners. But we’d recommend that you don’t consume it later in the evening – but as this pill is designed to be taken in the evening, you don’t have much choice here.

Basically, it’ll have the same effect as drinking coffee later in the day; you might struggle to sleep after taking this pill, but of course, this will depend on your tolerance to caffeine too.

We would have preferred Cellucor to have left caffeine anhydrous out of this pill. But given their experience in the supplements industry, we’re guessing that they’ve only added a small dosage here, although we can’t confirm this as caffeine has been hidden in a proprietary blend.

The reason why toothed clubmoss has been added to SuperHD Fire, is because it contains high amounts of Huperzine A; this is known to be a cognitive enhancer that increases your focus – not bad for when you need to concentrate on promoting fat loss.

However, the disappointing thing is that toothed clubmoss hasn’t shown to help suppress your appetite; as this is the last ingredient inside SuperHD Fire, we don’t see how Cellucor are advertising SuperHD Fire as being able to control your appetite.

You might be thinking that suppressing your appetite isn’t very important, but remember that decreasing your calorie intake is easier than trying to burn off fat. So feeling full for longer between meals when taking fat burners is one of the main benefits we look for when choosing these supplements. 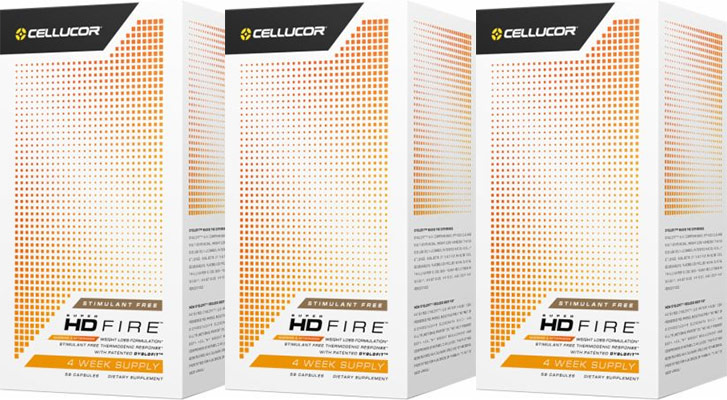 In terms of side effects, the only real worry is the caffeine anhydrous in the evening pill; as it’s inside a proprietary blend, you don’t really know the exact dosage inside, which can potentially keep you up at night.

However, apart from that, we can’t see any other potential issues with SuperHD Fire.

SuperHD Fire contains some great ingredients, and we were especially impressed by the addition of DygloFit, which seems to be effective in studies conducted.

However, you can’t ignore that SuperHD Fire is missing some key fat burning nutrients like green tea extract and glucomannan (which is capable of suppressing your appetite).

As a result, we believe that you could find a more effective fat burner for a lower price.