Cellucor has released quite a few fat burners in their ‘SuperHD’ series, with Xtreme being another addition. It comes in a similar container to the others, but we’ll be taking a look at what makes this fat burner unique to the others.

As with most Cellucor products, it’s priced quite highly ($69.99), so we’ll be checking which ingredients have been added inside to see whether it justifies this price tag.

If you know about supplements, then you’ll know about Cellucor. They’re a big name in the industry and are probably best known for their C4 line of pre workouts.

But it seems like they’re putting a big effort into creating better fat burner supplements, expanding their SuperHD series in order to do this.

So lets see whether Cellucor has added a good range of fat burning nutrients into SuperHD Xtreme in the next section.

Ultimately, this makes it harder to determine the safety and effectiveness of each ingredient inside this fat burner. But we’ll still give you a rough indication in this section using our knowledge.

But we’ll also point out that SuperHD Xtreme comes with a strange serving size for a fat burner; fat burner supplements usually come with a serving size of 3-4 capsules, but this product only offers 1 per day.

Anyway, without wasting anymore time, let’s get to the important bit below.

This is usually the most reliable stimulant you can find in supplements, when you know the exact dosage inside. However, as we’ve mentioned, you’re not shown the exact dosages of nutrients inside SuperHD Xtreme due to every ingredient being in a proprietary blend.

The overall dosage of the ‘SuperHD Xtreme Blend’ is 435mg, which isn’t very much. So hopefully, Cellucor would have added a sensible dosage (under 100mg caffeine per capsule).

If this blend contains more than 200mg per capsule, then those sensitive to this stimulant will be at increased risk from side effects like jitters and energy crashes.

This is a patented version of tetramethyluric acid and is an alkaloid found in kudingcha (chinese tea). It’s thought to be an anti-inflammatory, but it’s not proven to work in enough studies for it to be reliable.

As a result, there’s not enough evidence to suggest whether this is an effective ingredient or not.

You’ll know when you consume Cayenne Pepper Extract due to its spice; it’ll raise your body temperature and make you sweat.

Basically, this function boosts your metabolism, helping you burn fat at an increased rate. As a result, there’s no denying that cayenne pepper extract is effective in fat burner supplements.

As you can tell by the name of this ingredient, it’s another source of caffeine. But this isn’t always a good thing; as we briefly mentioned before, consuming large amounts of caffeine in 1 capsule puts you at risk from suffering side effects like jitters and energy crashes.

This risk is increased due to the fact that Cellucor hasn’t shown you the exact dosages of each ingredient in SuperHD Xtreme. Basically, this is a great example of why we don’t like proprietary blends in supplements, and is the reason why we personally try to avoid them.

We’re not actually sure what this ingredient is, as it’s not commonly added to fat burners or been part of many studies. But it appears to be aimed at reducing anxiety levels, which suggests that it’s considered to be a relaxing agent.

Having relaxing agents in supplements containing higher dosages of caffeine can be beneficial, as they can ‘even-out’ the stimulating effects of caffeine and keep you safer from jitters.

But there isn’t enough evidence to prove that Zembrin is effective. As a result, we would simply recommend that you search for fat burners containing sensible dosages of caffeine.

This is definitely the most controversial addition to SuperHD Xtreme. It’s been reported by users to cause side effects in the past, and is actually banned from use in supplements in the UK.

Now, we’re not claiming that it’s definitely going to cause adverse effects. But Rauwolfia Vomitoria Extract definitely seems capable of doing so, in our honest opinion.

As a result, we can’t recommend that you consume suppplements containing Rauwolfia Vomitoria Extract. Instead, look for safer and more effective options such as green tea extract, which is tried-and-tested to promote fat loss. 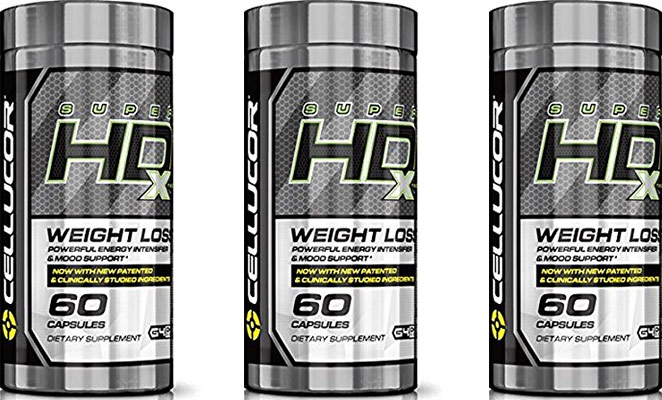 The main concern we have with SuperHD Xtreme is that it contains Rauwolfia Vomitoria Extract; as we’ve mentioned, this has been reported to cause side effects and has been banned from use in supplements in the UK as a result.

But as we’ve also mentioned, there’s an unknown dosage of caffeine anhydrous in SuperHD Xtreme, due to every ingredient being inside a proprietary blend. This isn’t a good thing, and can raise your risk of suffering jitters and energy crashes.

There’s no denying that Cellucor have built a great reputation for themselves in the supplements industry. However, this fat burner supplement isn’t their best product on the market.

While it does contain some great ingredients like caffeine anhydrous and cayenne pepper extract, it’s mostly filled with less reliable nutrients; as every ingredient has been added into a proprietary blend (in unknown quantities) too, this makes SuperHD Xtreme even less reliable overall.

Ultimately, we personally try to avoid supplements containing proprietary blends. It’s much better to know exactly what you’re putting into your body, in order to stay safe and ensure you receive an effective fat burner.