GAT have quickly become a respected supplements brand, so we’re always interested when we see one of their products in a store. This caught our attention as it’s marketed as a fat burning, testosterone boosting product – so we’ll be putting this in both the fat burner and test booster category.

Looking at the benefits, GAT have clearly focused this product more on it’s supposed ability to help you burn fat; usually, test boosters should improve your strength, endurance, and libido too (but these benefits are nowhere to be seen on the advertisement of JetFuel T-300.

We’ll be taking a detailed look at GAT’s fat burner/test booster – and see whether their unusual supplement can compete with the best on the market.

First of all, we need to complain about GAT’s website. When you go on it, you’re faced with a loading bar – and it takes forever to get to the front page. In fact, if we didn’t need the info for this review, then we would’ve clicked off and never tried again.

Anyway, now that we’ve got that rant out of the way, we’ll tell you a bit about GAT; this supplements brand has an impressive list of sponsored athletes, including Big Ramy and Sadik Hadzovic – which we believe has helped boost their reputation.

On their website, it claims they’ve been around for nearly 20 years, which would make them as old as MusclePharm and some of the other ‘big boys’ of the industry. They’re quite well known for their pre-workout ‘Nitraflex‘ – so let’s see whether JetFuel T-300 can gain the same reputation.

The first thing we look for, when peeking at a product’s ingredient list, is whether it contains any proprietary blends. Well, we’re glad to say that GAT JetFuel T-300 doesn’t contain any blends, so you can see the dosages of each ingredient clearly listed – this is a good start.

The next thing we check is whether it contains any potentially harmful nutrients; unfortunately, this is where GAT JetFuel T-300 disappointed us. It contains Bitter Orange Extract, which we’ve had bad experienced with in the past (we’ll expand more on this below). 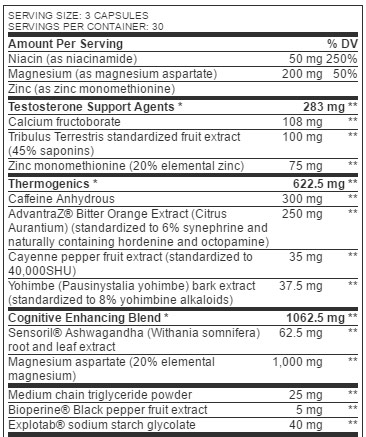 While this might sound fancy, it’s simply a mixture of calcium and fructose; this isn’t bad, but it’s also not worth having in a gym supplement (remember that gym supplements aren’t multivitamins…you can pick those up from your supermarket for a few dollars).

The only benefit you can get from calcium fructoborate, is a potential improvement in cholesterol levels. However, it hasn’t shown to help improve fat loss or testosterone levels (making it useless in GAT JetFuel T-300).

This is a rookie error by GAT here. Tribulus is often thought to improve testosterone levels, which is why it’s seen in numerous T-Boosters. However, studies have shown it has no effect on your test levels at all.

Not only that, Tribulus has also been reported to cause a worrying side effect – increasing the weight of your prostate. As you should know, this can cause more severe issues that should definitely be avoided.

There are much better options available on the market, so you shouldn’t take ineffective ingredients.

Zinc can be a great ingredient when you’re aiming to boost your testosterone levels. However, it’s important to know that there are different forms of this mineral.

The best form (and the one that’s most proven in studies) is zinc aspartate – which is the most common form of zinc found in supplements for this reason. However, GAT has chosen zinc monothionine for their JetFuel T-300.

This is a problem; zinc monothione has a poor absorption rate, meaning it’s basically ineffective when orally supplemented. As a result, this is a useless addition to this product.

For a fat burner, this is one of the best ingredients you can find – it boosts your energy levels while you’re cutting body fat, which you’ll appreciate on a cut.

However, if we’re reviewing this product as a testosterone booster, then it’s not really needed. As JetFuel T-300 contains more ingredients aimed at boosting fat loss, we’ll regard this as a fat burner – which would make caffeine a key ingredient here.

GAT has dosed this well at 300mg spread out in 3 capsules, so you shouldn’t suffer from jitters or energy crashes here (unless you’re extremely sensitive to caffeine).

Bitter Orange Extract is one of the worst ingredients you can find in any supplement – it’s been banned in numerous countries due to causing harmful side effects (which should be enough to put you off).

For this reason, we recommend staying away from this nutrient – there are many better fat burning ingredients available that haven’t shown to cause any side effects.

This is one of our favorite fat burning ingredients you can find on the market. If you’ve eaten a spicy dish with chillies inside, then you’ll know that it can raise your body temperature – well, this is exactly how it boosts your metabolism.

Ultimately, a boost in metabolism leads to you burning more body fat as fuel (which is what you want when buying a fat burner supplement).

A safe and effective ingredient that’s proven to work. You can’t argue against it.

From good to bad…like bitter orange extract, yohimbe has also been banned in countries after causing harmful side effects. For the same reason, we strongly recommend you to avoid this ingredient.

GAT has added this in JetFuel T-300 as it’s believed to improve your testosterone levels. The problem is, no study has shown that it has this desired effect.

However, Ashwagandha is useful in other ways; studies have actually shown that it can reduce anxiety, while improving your power output (strength) on numerous occasions. For this reason, it can benefit you in any supplement – but we don’t consider it to be key in any either.

The official term for this ingredient is the ‘chelated megnesium salt of aspartic acid’. But all you need to now is that it’s a mineral.

In a nutshell, magnesium aspartate can improve your general health, but it won’t do much to directly help you lose fat or boost your testosterone levels – meaning it’s not necessary in GAT JetFuel T-300.

If you’re unsure what MCT is, then all you need to know is that it’s found in coconut oil (which is why some people consume coconut oil during intermittent fasting or low calorie diets). However, the truth is, MCT hasn’t proven to suppress your appetite in many studies – for now, it’s unreliable, but watch this space for more updates.

This is a patented form of black pepper extract (the same stuff you put on your food). But it’s more useful than you think – black pepper extract has shown to improve the absorption rate of other ingredients it’s consumed with; it helps make the whole supplement more effective as a result.

However, it’s not a miracle ingredient – it won’t make an average supplement great again…so it won’t do much for GAT JetFuel T-300.

Not much is known about this ingredient, apart from the fact it’s made from potato starch. It’s believed to expand in your stomach to make you feel fuller for longer, but we don’t like that this is made artificially.

If you want the same benefit as this, then glucomannan is the safest and best option here. 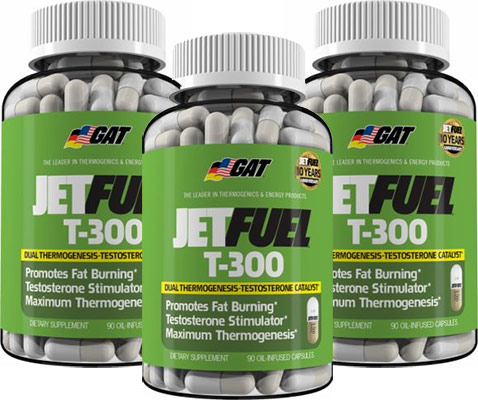 There are 3 concerns when it comes to JetFuel T-300, with 2 of them being banned in numerous countries after causing harmful side effects (Bitter Orange Extract & Yohimbe).

Tribulus Terrestris is the third one, and has been reported to increase the weight of your prostate – which is very bad news. You don’t want to suffer this side effect, as it puts you at harm of severe illness.

Here’s the side effects you might suffer with this product:

Ultimately, although this is marketed as both a fat burner and testosterone booster, we believe it has more chance of helping you burn fat than boosting your testosterone. Saying that, it doesn’t seem very likely to either at all.

We always stay away from supplements containing banned ingredients such as Yohimbe and Bitter Orange Extract – and this is no exception. We can’t recommend you to try GAT’s JetFuel T-300 for this reason.