Proclaiming itself as “one of the most potent weight loss formulas out on the market” along with numerous testimonials boasting unbelievable results – it would be foolish of me not to investigate the strange goings-on that are surrounding Biotest’s Hot-Rox Extreme.

Hot-Rox Extreme: Is it Bully for Biotest, or bullshit for consumers?

Biotest has been around for well over a decade. Their successes have allowed them to try their hand at almost every type of supplement on the market covering protein, energy, fat loss, test boosters and even dabbled in the women’s market.

To use their own words Biotest’s products “are developed using cutting edge information and the latest in supplement research to help you build muscle!”

Their products are more often found online, rather than in store.

Hot-Rox Extreme, like most fat burners comes in pill form. This is good news so far as the stated dosage requires one to two servings (depending on workout intensity) twice a day. This method is most welcome as it crushes any fear of lugging bags of powder, like you have with some competitors.

It implicitly states on the bottle to not exceed the four pill dosage over the course of twenty four hours, and looking at the ingredients I can see why:

Proprietary blends. The ‘Mystery Meat’ for the supplement user, but instead of an eyelids and anuses situation, it’s usually more a dangerous chemicals and heart risk scenario.

We’ll start by exploring the components of the ostensibly named ‘Self-Microemulsifying Thermogenic Gel’ which curiously includes all the product’s ingredients, apart from caffeine. 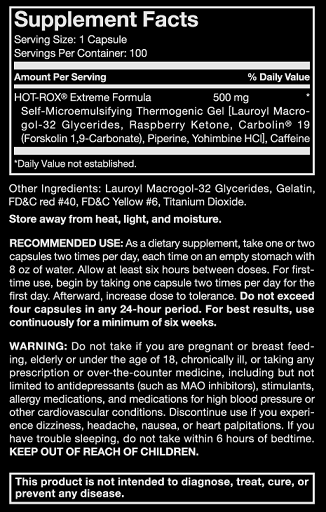 Lauroyl Macrogol-32 Glycerides – This is just casing for the pills, and irrelevant to the product’s effect. The fact that it also appears in the ‘Other Ingredients’ section leads me to believe Hot-Rox Extreme is taking advantage of it’s technical name to make the formula seem more ‘scientific’ and informed.

Raspberry Ketone – Suprisingly, found in raspberries. Rasberry Ketone has been hailed a weight loss aid and metabolism booster. Unfortunately there has been no evidence to scientific evidence to prove these claims.

Carbolin 19 (Forskolin 1,9-Carbonate) – From the active compound in Ayurvedic plant. The anabolic effects have been compared to the steroid Anavar for its fat burning qualities, whilst maintaining muscle.

Yohimbine HCl – A powerful ingredient that contributes to suppressing fat metabolism whilst stimulating fat loss. It brings a lot to the table, but sadly this also includes potential side effects of anxiety, gastrointestinal distress and hypertension.

Piperine – Essentially black pepper. This aids the absorption of nutrients in the body.

Caffeine – Proven to boost metabolism and to improve energy levels. When in controlled doses it can be very effective in the fat burning process.

As with many fat burners, caffeinated ingredients are a given. Unlike most however, Hot-Rox goes one step beyond by using the agent in its purest form, which is fine when the stated does is available. In this instance however, it isn’t.

This can be a problem in a number of ways by causing headaches, jitters, rashes, insomnia, nausea and a whole host of other ailments that go hand-in-hand with stimulant abuse. Even Biotest itself is aware of the risks, and warns first time users to half the usual amount, later increasing to tolerance.

Hot-Rox Extreme, although it has received positive feedback in the past, unproven ingredients may eventually ruin this perspective. As Hot-Rox has included a variety of parts to this fat burning concoction, it’s unwillingness to unveil the actual measurements of the pieces involved appears suspect. A good example of ingredient transparency would be Instant Knockout from Roar Ambition.

An ingredient list should never ask more questions than it answers. It also shows that it has nothing to hide.

The unknown dosages of caffeine and other strong components in Hot-Rox Extreme, like carbolin 19, may put the safety of the supplement into question. This is a common occurrence with most ‘bold’ new fat burners, and it doesn’t set a great precedent for future big brands.