Instant Knockout vs Hydroxycut Next Gen

We’re quite excited to get this battle underway, as both Instant Knockout and Hydroxycut Next Gen are HUGE named in the fat burner market. In fact, it’s hard to avoid them when you’re looking for a fat burner, as everyone raves about them.

Straight away, we can see Instant Knockout has one big advantage over Hydroxycut Next Gen; it’s believed to contain ingredients that help suppress your appetite, which would help you cut calories by staying away from those sugary treats.

However, we’ll be keeping a close eye on each fat burner’s nutrient profile, to see whether it can live up to their claims.

Roar Ambition have built a great reputation for themselves, on the back one of the highest rated testosterone boosters on the market, TestoFuel.

Instant Knockout is their second product, and equally packs a punch; it’s endorsed by UFC stars such as Diego Sanchez, proving to be as big of a hit.

We’ve heard great things about Roar Ambition’s customer service, but we haven’t had to deal with them. But we were sent a tracking number and details about the shipping of Instant Knockout, which was good to see.

This company needs no introduction. MuscleTech are one of the giants in the industry, with their ‘Hydroxycut’ line of fat burners being their highest rated supplements.

There’s been many released under the Hydroxycut name, so it’ll be interesting to see whether one of their best rated fat burners, Hydroxycut Next Gen, can K.O Roar Ambition’s fat burner.

Now, this is the important bit. Think of the ingredients as the motor of a car; even if the outside is nice and shiny, it if contains a rusty engine, it’s not going to take you very far.

This is exactly why you shouldn’t just trust the advertisements from companies. Most of them will sell their souls to make money.

However, by looking at the ingredient list of each supplement you’re interested in, you’ll avoid the lies and deceit. This way, you can make you own decision about these products, and see whether they’re likely to actually work.

As a result, we’ll be keeping a close look at the ingredients inside both of these pre-workout supplements. Ultimately, seeing whether one contains better dosed nutrients that the other.

There’s a high chance you’ve had a cup of green tea before. Well, taking it in powder form allows you to consume higher amounts of catechin, which is the beneficial antioxidant that promotes fat loss.

Not only that, it also saves you from having to drink 4-5 cups of green tea per day – making it an efficient and effective ingredient in both fat burners.

However, if you check the dosages of both products, you’ll see that Muscletech hasn’t dosed green tea extract optimally in Hydrxycut Next Gen (only 150mg).

If you’re interested, the optimal dosage for green tea extract has shown to be 500mg. As a result, Instant Knockout contains the better dosage and gets the head-start here.

Green coffee bean extract is another key fat burning nutrient, as it contains high amounts of chlorogenic acid. This makes it an effective thermogenic (which boosts your metabolism, promoting fat loss).

Again, you can see that both Instant Knockout and Hydroxycut Next Gen contains green coffee extract. And MuscleTech have pulled it back slightly here.

Here’s why; the optimal dosage of green coffee extract has shown to be 120-300mg. Instant Knockout contains a slightly under this amount at 100mg, while Hydroxycut Next Gen contains a good 200mg serving.

Good job by MuscleTech putting themselves back into the title race.

This is the third and final ingredient that’s seen in both Instant Knockout and Hydroxycut Next Gen.

For general purposes, we recommend consuming under 100mg caffeine per capsule in fat burner supplements; this will keep you safe from jitters and energy crashes, while offering enough of an energy boost.

Ultimately, Instant Knockout has serving size of 4 capsules per day; this means that its 300mg caffeine dosage is split into 4 capsules, resulting in each capsule containing 75mg caffeine – this keeps you safe from side effects like jitters and energy crashes.

However, Hydroxycut Next Gen only has a serving size of 2 capsules; this means that it contains 125mg caffeine per capsule, which is a high amount of caffeine for a fat burner.

To put this into perspective, pre workout supplements usually contain at least 150mg, but these are designed to pump you up before you gym session. You don’t want to consume 125mg caffeine if you’re going to be sat at a desk in the office…

As a result, this puts Instant Knockout slightly ahead again.

Now that we’ve covered the ingredients that are seen in both fat burners, we’ll see which supplement has the better ‘unique’ ingredients.

This is one of the best thermogenic nutrients available.

Think about it, what happened last time you ate loads of chilli? You would have started to sweat and asked for some milk to help cool you down.

Well, this raise in body temperature is what boosts your metabolism and promotes fat loss. As a result, we consider cayenne pepper powder to be an effective fat burning ingredient

There’s a chance that you’ve eaten glucomannan before in an asian restaurant. It’s commonly added to Asian hotpot’s, as well as in ‘zero calorie’ rice or noodle products.

Why? Because it’s known for its ability to help keep you full for longer after a meal. This is exactly what Roar Ambition have added glucomannan into their fat burner, Instant Knockout.

Realistically, it’s not going to make you feel like you’ve had a 3 course meal. But it’ll help keep you away from snacks between meals, which will help lower your calorie intake, therefore promoting fat loss.

This is one of the nutrients that isn’t seen in Instant Knockout. It’s not a common addition to fat burners, and it’s more commonly known for being used in traditional Chinese medicine.

However, there isn’t enough evidence to consider blue skullcap extract to be a reliable ingredient.

Red Sage is another ingredient that’s been used in traditional Chinese medicine. It’s believed to help treat cardiovascular diseases, but there hasn’t been any evidence to prove whether it’s able to help you shred fat.

As a result, we have to consider this to be another unreliable ingredient in Hydroxycut Next Gen.

Many people often forget how important serving sizes are when choosing a supplement. While a serving size of 1-2 capsules might be more convenient, it’s not going to keep your body ‘topped up’ with nutrients for very long.

For example, serving sizes of antibiotics are usually between 3-4 capsules per day; this allows your body to stay topped up with the optimal amount of antibiotics in your body, to help you recover from sickness.

Well, this same ideology needs to be implemented into gym supplements. There’s no point consuming optimal dosages of nutrients, if it’s only going to stay in your system for 2-3 hours.

As a result, you should always look for gym supplements offering 3-4 capsule daily servings – for the best results.

Here’s the serving sizes of each fat burner supplement:

As you can see, Instant Knockout contains the optimal serving size of 4 capsules daily. This means that Roar Ambition’s fat burner will be more likely to raise your metabolism and help you burn fat. 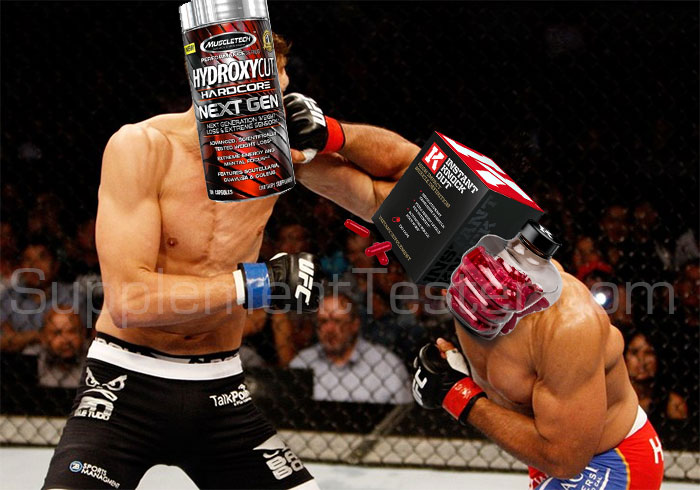 In terms of side effects, we’ve tried Instant Knockout and it didn’t cause any – which is always good news.

This is because the overall servings of Instant Knockout are spread into 4 capsules, keeping you safe from jitters.

The main concern we have with Hydroxycut Next Gen is that it contains over 100mg caffeine per capsule.

This can put you at risk from suffering side effects like jitters; especially if you like to consume coffee or tea throughout your day too.

Here’s the side effects you might suffer with Hydroxycut Next Gen:

This was a close match-up between 2 very respected fat burner supplements. It’s easy to see why both products have become very popular, and it was difficult to decide which supplement to award the victory to.

However, due to Instant Knockout containing better serving sizes and better dosages of caffeine per capsule, we believe it’s taken the lead and delivered the final punch.

We’ve tried Instant Knockout ourselves, and we very happy with the results. 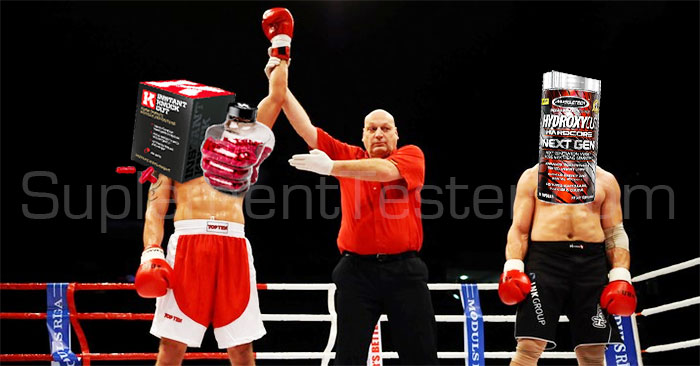