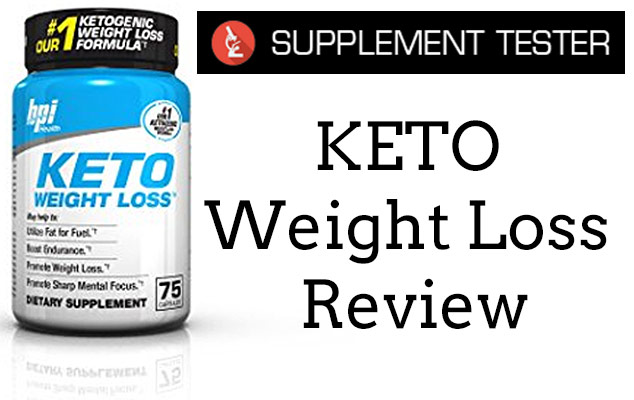 For the readers in Canada, this one is for you. We had requests about this popular fat burner supplement in Canada, and we saw a big claim by BPI Sports: “The First Ever Ketogenic Fat Burner”.

The marketing for this fat burner focuses heavily on the fact it’s supposed to be the “first ever ketogenic fat burner”. This is interesting, as ‘keto’ fat burners haven’t become the ‘next big thing’, so this might suggest they’re not as good as other supplements…

Anyway, we’ll analyze each ingredient inside this fat burner to see how good it is.

BPI Sports are a USA-based supplements company that was founded in 2010. Since then, they’ve been awarded prizes on bodybuilding.com and have produced some popular products.

But you’re here to read about KETO Weight Loss; so we’ll get into the details below.

The first thing we noticed about KETO Weight Loss, was that it contained a proprietary blend. This is bad, as you’re not shown the exact dosage of each ingredient inside – all you’re given is the overall dosage (2.5g).

Why is this bad? Well, this increases your risk of side effects such as jitters, crashes and itchy skin – which are commonly associated with pre workouts for this reason. 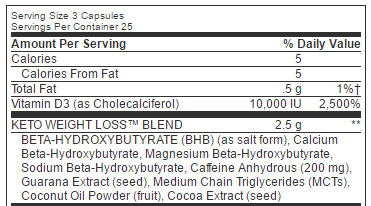 Not much is known about this ingredinet, apart from it’s contained in coconut oil. One study showed that beta-hydroxybutyrate is able to prevent blood sugar spikes – which can promote fat loss.

However, there hasn’t been enough studies that’ve replicated this result – making it an unreliable ingredient.

We won’t analyze each form of Beta-Hydroxytutyrate, as all of them are unreliable for the same reason.

This stimulant is a great addition to any fat burner, as it’s shown to raise your energy levels while you cut fat. The worst thing about cutting calories is the lack of energy – so Caffeine is great to supplement during this time.

BPI Sports have dosed Caffeine sensibly at 200mg for the daily serving size. This means you’ll stay safe from jitters, but we wish they had provided all the dosages for every ingredient (instead of putting them all in proprietary blends).

We just mentioned that BPI added a good dosage of Caffeine in here. But here’s where the problems start – Guarana is another stinumlant, and it’s part of this proprietary blend.

In a nutshell, you’re not given the dosage of Guarana here, so there might be a big dosage in KETO Weight Loss. This means you’re likely to suffer from jitters and energy crashes.

In fact, this is a great example of why we don’t like proprietary blends.

This is found in vegetable oil and coconut oil. It’s believed to promote fat loss by helping you feel full for longer; this would help you reduce your calorie intake, which would result in more fat lost.

While this sounds good in theory, no study has shown that MCT’s actually work. As a result, we consider MCT to be an unreliable ingredient.

Personally, we prefer proven ingredients that we know will work. Otherwise, we don’t like the possibility of wasting our cash.

This is essentially coconut oil made into powder form so it can be added into supplements. This caught out attention, as it’s the first fat burner we’ve seen with this inside.

However, everyone knows that coconut oil is beneficial and we can’t argue with that. But what we will say is this; there are much better ingredients that’ve proven to promote fat loss more than coconut oil.

In a nutshell, BPI Sports have added coconut oil into KETO Weight Loss to try and promote your body to use fat as fuel. However, studies have shown that you need to actually change your entire diet for this to happen.

So even if you buy this product, if you don’t change your diet to a high fat and low carb diet, this fat burner won’t work.

Cocoa Extract is added into supplements due to containing a stimulant called Theobromine. Basically, this is believed to offer the same benefits as caffeine (increased energy levels etc.).

But here’s the problem: Theobromine hasn’t proven to be as effective as caffeine. Not only that, it’s harder to measure the exact caffeine inside Theobromine (meaning you’re at even more risk of suffering from jitters and crashes) – as it’s part of a proprietary blend, this risk increases even further…

By now, the point about proprietary blends should’ve hit home – they’re not good. 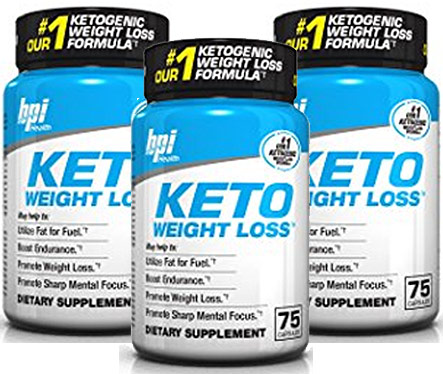 As KETO Weight Loss by BPI Sports contains 3 sources of caffeine, there’s a high risk of you suffering from jitters and energy crashes.

Not only that, not much is known about Beta-Hydroxybutyrate – so it’s not proven to be 100% safe yet. Until there’s been more research showing it’s both safe and effective, we’ll be avoiding this ingredient.

You might suffer from these side effects with KETO Weight Loss:

BPI Sports have tried to make “the first keto fat burner” a success. But after examining the ingredients inside KETO Weight Loss, it’s not likely to work.

The only benefit you might experience is an increase in energy levels. However, as there’s 3 sources of caffeine in this fat burner, you’re also likely to experience jitters and energy crashes too.

This is a great example of why proprietary blends are bad. If BPI Sports provided the exact dosages of each ingredient, we could see whether they added effective dosages or not.

However, safety comes first; so we have to assume the worst here, and that means you might suffer from jitters and energy crashes.

The worst thing about KETO Weight Loss, is that it’s not even likely to help your body use fat as a fuel source (which is what it’s designed to do). Ultimately, we can see why no other companies have tried to create a “Keto” fat burner.