We saw Legion Phoenix fat burner while scrolling through the Bodybuilding.com website. This seemed to be a new product, which is exactly what we look out for.

We like that Phoenix fat burner is an all-natural supplement. However, there were a few ingredients that we don’t like…we’ll explain everything further down in this review.

The company that created Phoenix fat burner are called Legion Athletics. We didn’t learn much about this company – it seemed more geared towards convincing you to buy their products than actually giving useful information about themselves.

We don’t like this; we believe the rest of a supplements website can be as ‘selly’ as they like, but their ‘about’ page should provide information about their actual company.

But we won’t let this affect our decisions in the main review below.

After taking a look at the nutrient profile of Legion Phoenix, we don’t like that this fat burner contains citrus aurantium. This has shown to cause numerous side effects – but we’ll explain more in when we examine the nutrients inside. 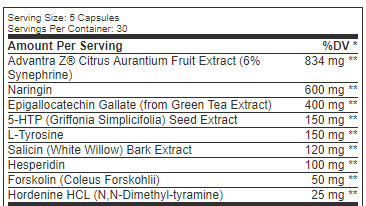 Right, so we just mentioned that Citrus Aurantium isn’t a great nutrient to have in a fat burner.This is because it’s been reported to cause numerous side effects when added to supplements.

So why’s it used? Well, it was first added into products after Ephedrine was banned by the FDA. However, since then, citrus aurantium hasn’t actually shown to be any safer.

As a result, we always stay the hell away from citrus aurantium – and to be honest, you should do the same.

Naringin is a flavanoid that’s found in grapefruits. But let’s be honest here; when was the last time you ate a grapefruit and experienced any benefits?

This is because no study has shown that naringin promotes fat loss – meaning it’s ineffective inside Pheonix fat burner.

These are types of catechin found naturally in green tea. But it’s not like Legion has isolated this and added it into this fat burner – Legion has simply added green tea extract and made it sound fancier.

Although there is a good amount of green tea extract in here. So it’s good that Legion has dosed green tea optimally.

Also known as oxitriptan, this is a naturally occuring substance and affects your serotonin levels. Basically, 5-HTP improves your mood and is believed to help you sleep.

However, you can feel as happy if you want – but you might not lose fat. Ultimately, 5-HTP hasn’t shown to have any direct influences on fat loss (meaning it’s ineffective in Phoenix fat burner).

We’re not sure why Legion has decided to add L-Tyrosine into their fat burner, Phoenix.

In a nutshell, the only benefit that L-Tyrosine delivers is improved cognition. You’ll want to take servings of fat burner supplements to lose weight.

It’s not like you’ll be popping pills of fat burners only before you enter an exam hall for tests. So L-Tyrosine isn’t needed in Phoenix fat burner either.

This is how uncommon this ingredient is; we had to research about it, and still didn’t find much valuable information.

But we did find this – it’s believed to be an anti-inflammatory and ‘pain-killer’, similar to aspirin. However, not many studies have researched whether it’s 100% safe or not.

As a result, we wouldn’t risk consuming this nutrient yet; we only consume ingredients that we know are 100% safe and effective.

Not only that, you should always be concerned if a product contains a ‘rare’ ingredient. Think about it – when the iphone came out, every company released touch-screen smart phones…if salicin bark extract really worked, then it would be inside every fat burner by now (like how green tea extract is).

If you’re wondering what this is – Hesperidin is a bioflavanoid. But while it’s able to improve your blood flow, it’s not shown to promote fat loss in any study (meaning it’s useless in Phoenix fat burner).

This is one of the more interesting nutrients to be added into supplements recently. In a nutshell, coleus forskohlii is believed to promote fat loss while boosting your testosterone levels.

If it works, then it’ll be one of the best nutrients available. But here’s the problem – no studies have proven whether it works yet.

As a result, coleus forskohlii is still an unreliable ingredient.

Another interesting ingredient; Hordenine is thought to be a stimulant and fat burner nutrient. However, this hasn’t shown to work in any study either.

As a result, we consider Hordenine to be an unreliable ingredient. 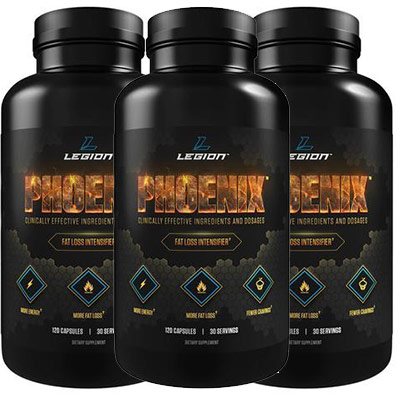 If you’ve been reading our review properly, then there’s a chance that you’ve been waiting for this section.

We mentioned that citrus aurantium can cause numerous side effects – so it’s good that you know this. However, you don’t know what these are yet – don’t worry, we’ll let you know below.

The problem is that other nutrients haven’t shown to work. In fact, this fat burner contains citrus aurantium, which has shown to cause numerous side effects (which you can see from the list above).

As a result, we can’t recommend that you consume Legion Phoenix fat burner – especially when there are many better options available.