However, the websites that favor this product do also sell it – we must take their recommendation with the usual peppering of potential-bias here.

And if I were to don my skeptical cap for a moment, you can see the marketing for this product is plastered in professionally designed warning labels… Almost as if Nutrex are attempting to sell this product via it’s controversy. Which really makes quotes like:

“EXTREME CAUTION ADVISED:This is the strongest fat destroyer we have ever released. It’s so strong that you can never take more than one pill.”

really speak for themselves. I’m not making that one up by the way, it’s plastered all over it’s page on the GNC website.

Ignoring the flash for a moment, the sheer bones of this product is what’s important and Nutrex explain verbatim that Lipo 6 Black Ultra Concentrate contains:

Aside from the vague ‘Super Effects’ description, this could be a pretty standard fat burner. So who is Nutrex?

Nutrex interestingly were the first supplement company to release their products in liquid capsule form. Later they even produced a ‘multi-phase capsule’ which supposedly works as two capsules in one. They’re clearly one for innovations.

Nutrex deal in a range of performance supplements, such as pre-workouts, fat burners and BCAAs. So Lipo 6 Black Ultra Concentrate should be a pretty solid product, considering this is a product that falls directly into their wheelhouse.

This product can be purchased from multiple respectable vendors online or in store.

Without further a-do let’s see how warranted those warning labels really are as we delve deep into the ingredients. 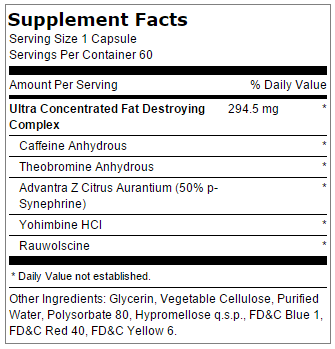 No wonder it claims itself to be dangerous. This product is just a proprietary blend.

As a side note, just because the ingredients are in this order it doesn’t mean that they are the most potent.

Caffeine Anhydrous – One of the best ingredients that a fat burner can possess. Caffeine is good for raising the energy levels of the user, but also the metabolism.

Theobromine Anhydrous – A stimulant, and one of the main reasons you get that ‘pick-me-up’ energy boost from chocolate. Both Theobromine and Caffeine work with the central nervous system to raise energy levels, together, the effects of each heighten, although as a trade-off so too do the side effects. More on that later.

Citrus Aurantium – A classic favorite of supplement companies, although there has been insufficient evidence that Citrus Aurantium or the Synephrine it contains can really help with weight loss. It can however cause side effects in certain doses, but as we don’t know the measurements due to it being a blend, this may be a problem.

Yohimbine – A great ingredient in small doses, and has been seen to suppress fat cell metabolism. But the fact that this falls under a proprietary blend makes it exceedingly difficult for us to see if it is at a safe level to avoid side effects.

Rauwolscine – An alternate form of Yohimbine with slightly different properties. It puts less emphasis on the body to preserve fat, and makes it more open to spending it as energy.

As always with a proprietary blend you’re playing with fire. All these ingredients and you don’t know how much of which does what. It can be a very dangerous position to be in if you don’t educate yourself.

Unfortunately this is one of the worst I’ve seen, it has very little redeeming features.

Firstly the side effects of Theobromine when used improperly can be rather unpleasant, especially when working with caffeine – it can cause problems like nausea, anxiety and tremors.

Citrus Aurantium on the other hand with it’s contents containing Synephrine can lead to other issues such as raised blood pressure, and the increased risks of heart attacks especially when used with caffeine. It has also been known to cause headaches in some people.

Yohimbine isn’t that bad in small doses, however due to this being a proprietary blend we have no real way of knowing what the actual measurement is in this product. So we must treat it with caution and be aware that it can cause anxiety and gastrointestinal distress.

This product was a bit strange to review. As the entirety of it’s contents is a proprietary blend, it’s very difficult to assess it’s effectiveness and safety.

The caffeine and Yohimbine are the only proven and promising ingredients in this product and even they have their problems when improperly measured. And without knowing these measurements, it doesn’t give us a lot of room for supporting it.

In closing it appears there’s a lot wrong with this product and not a lot of right to counter balance it. With that said, I can only recommend you to not waste your money on this product, and to pick up something with transparent measurements about their ingredients.