This is one of the new lesser known fat burners, but Metabolic Diet haven’t messed around when pricing LipoFlush.

It comes with a premium price tag, so it’s definitely made to compete with the best fat burners on the market – but is it as effective? Let’s find out…

What we found interesting, was that it LipoFlush doesn’t contain any nutrients to help suppress your appetite; this is one of the key benefits we look for when looking for a fat burner, so this is disappointing.

However, we can see that it contains some great ingredients like Green Tea Extract, so we’re looking forward to seeing how effective LipoFlush really is.

It took us a while to find this company’s website, because if you google ‘Metabolic Diet’, they’re nowhere to be seen…

Anyway, after about 10 minutes, we finally found Metabolic Diet’s site, and it wasn’t really worth the time to be honest; it looked dated and uninspiring, especially for a company trying to sell supplements that compete with the premium products on the market.

All we found was that this Metabolic Diet was founded by a licensed physician in Canada, who has numerous qualifications in sports nutrition and performance.

But their ‘about us’ page was nothing more than something that was made to blow up his ego, instead of actually inform you about the company.

So let’s stop wasting our time and move onto the important stuff.

Just by looking at the ingredient list for this supplement, you can see that it’s been OVERLOADED with more nutrients than necessary.

In fact, we think that this fat burner contains the most amount of ingredients that we’ve ever seen in 1 supplement before.

But if you’re sat there thinking ‘this means it’s great value for money’, then you might be surprised; as it contains a big proprietary blend, you’re not shown the exact dosage of nutrients inside (meaning you don’t know how effective they’ll be).

Not only that, we can see that there are a few ingredients that can cause problems, like Citrus Aurantium. Basically, this nutrient has been banned in countries such as the UK and Canada, after being reported to cause side effects.

We might sound very critical of this fat burner so far, so you’ll be glad to hear that this is a positive ingredient.

Why? Answer: Chromium has shown to help your body deal with carbs and sugar better, and it’s the reason many choose to consume green vegetables with their meals.

A great start with LipoFlush here.

From good to bad. Choline isn’t an ingredient you want to consume, because it’s shown to cause your breath and sweat to smell fishy.

So as a result, you’ll be stuck with fishy breath and no improvements to your performance. The worrying thing is that Metabolic Diet has dosed this highly at 650mg for no reason; they could have spent their budget wiser here.

There are many different forms of l-carnitine, adding up to almost 1,000mg.

However, there’s no real need for this; all of the different forms mainly help reduce fatigue from workouts (which is why it’s a great addition to pre-workout supps).

However, it’s not as useful in a fat burner, because it’s main benefit isn’t to promote fat loss.

As a result, it’s nothing more than a useful ‘bonus’ in LipoFlush; we would have preferred Metabolic Diet to have added an optimal dosage of green tea extract here, instead of adding it into a proprietary blend.

This is an ingredient that managed to gain attention in the media as an effective fat burning ingredient. But it’s strange, because no study had actually proven that it worked…

And nothing has changed. Even now, studies have shown that garcinia cambogia extract is an ineffective ingredient, so it’s not worth having in LipoFlush.

But the worst part is that garcinia cambogia extract has shown to cause side effects too. So it joins choline on the ‘worst ingredients’ list in LipoFlush.

You might have seen this listed as bitter orange extract before, but it’s not a good addition to LipoFlush here.

Basically, citrus aurantium has shown to help you shred some pounds. Doesn’t sound bad right? Well, that’s until you find out that it’s been banned in a few countries after causing side effects…

As a result, it’s a good idea to try and stay away from this ingredient.

This is a mushroom that’s been used in Traditional Chinese Medicine for it’s anti-aging and pro-vitality benefits.

However, it’s not the best addition to LipoFlush, as it’s not shown to much of an effect on fat loss. Ultimately, we’ll repeat that we would have preferred to see green tea extract in an optimal dosage, not inside a proprietary blend.

You might have seen this ingredient in fat burners, listed as CLA. While it’s been believed to help you shred pounds, not many studies have shown it to be very effective.

But the good news is that CLA might help you preserve muscle mass while you cut weight. As a result, we do consider this to be auseful addition to LipoFlush.

One big mistake that many supplement companies make, is adding an overload of caffeine into their products. So we’re happy to see Metabolic Diet has added a sensible dosage.

But it might be ‘too’ sensible; LipoFlush only contains 99mg overall caffeine, which is split into 6 capsules (meaning each serving contains 16.5mg caffeine, which won’t be enough to provide you with energy boosts).

In fact, you won’t really feel any benefits from consuming this amount of caffeine at all.

We feel that the ‘sweet spot’ with caffeine is 75-80mg caffeine per capsule serving; this will ensure your energy levels are topped up, while keeping you safe from jitters and other side effects.

Remember that we said LipoFlush contains a proprietary blend, well, this is it.

That means you don’t know the dosage of ingredients in here; unfortunately, this also means you’ll be left guessing how safe and effective the nutrients inside this ‘LipoFlush Proprietary Complex’ are.

We’re disappointed that Metabolic Diet added green tea extract into a proprietary blend, as it’s one of our favorite fat burning nutrients.

Why? Answer: it’s proven to work when consumed in dosages of 500mg and above.

But as it’s inside a proprietary blend, you can’t be sure whether it’s been added in this amount (which highlights the issue with companies using these blends).

Beta-Alanine is quite a controversial addition to any ingredient, but it’s rarely seen in fat burners, as it has no effect on fat loss.

So what does it do? Answer: beta-alanine has shown to enhance your muscular endurance, which can improve your gym session.

But here’s the bad part…beta-alanine is also known for causing a side effect called ‘paresthesia’ (tingling and itching on your skin).

As a result, we prefer to avoid this ingredient when choosing supplements, and because it has no effect on fat loss, we don’t see the need for it in LipoFlush.

This is another ingredient that we’re sad to see in a proprietary blend. It’s known to boost your metabolism by raising your body temperature (due to being a thermogenic), and will help you lose fat when consumed in optimal dosages.

But as you know by now, it’s been added in an unknown quantity, due to being inside the ‘LipoFlush Proprietary Complex’.

Rest Of The Ingredients

Let’s be honest, we’d be here all day if we were to examine the rest of the ingredients in this blend; this emphasizes the ridiculous and unnecessary amount of nutrients that have been added into LipoFlush.

So we’ll take you through the most important points about the rest of the ingredients.

Simply put, we can see that this blend contains numerous stimulants, so it makes sense why Metabolic Diet added such a tiny amount of caffeine anhydrous into LipoFlush.

Due to this fat burner also containing other stimulants like guarana seed extract, yerba mate extract and theobromine, you’re at serious risk from suffering jitters and energy crashes here.

As a result, we recommend that you choose supplements that only contain 1 stimulant to avoid side effects. 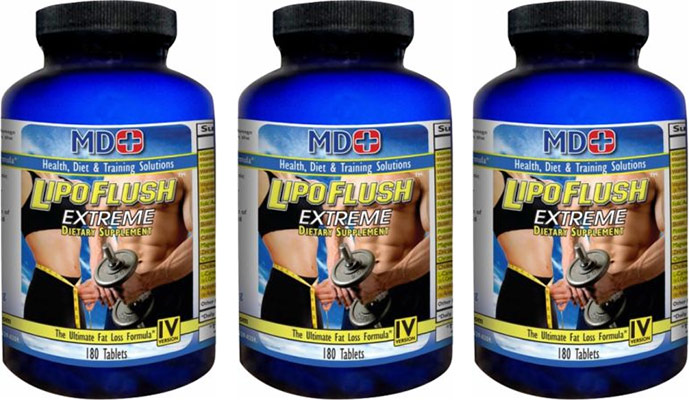 Metabolic Diet has filled LipoFlush with too many unnecessary ingredients, so it shouldn’t really come as a suprise to hear that it can cause side effects.

Which ingredients are putting you at risk? Beta-alanine, citrus aurantium, and the general overload of stimulants inside.

As a result, we’ll repeat that we recommend choosing a fat burner containing just 1 source of stimulant, so you stay safe from jitters.

See the possible side effects LipoFlush can cause:

Not what you’re looking for? See our
– Top three fat burners here –

One thing that will be clear to everyone, is that LipoFlush contains wayyy to many ingredients. Having over 10 nutrients in 1 supplement is unnecessary, so the fact this fat burner contains over 20 nutrients is crazy.

As a result, we can’t recommend you to try this supplement, when we know there are better options out there.