MuscleSport International have released some great products in the past. But in this review, we’ll be looking at their fat burner, Thermal Revolution, to see whether it’s worth trying out.

We like that MuscleSport International has designed this supplement to deliver all of the key benefits we look for in fat burners; not alot of products offer appetite control, so we’re looking forward to seeing whether the ingredients inside Thermal Revolution can back this up.

MuscleSport International are based in USA, and have produced multiple products in the supplements industry – from fat burners like Thermal Revolution to testosterone boosters and even pre workouts.

However, they’re website didn’t offer much more information about their company, so we’ll skip straight into the ingredients.

In terms of ingredients, Thermal Revolution has 11 overall, meaning it’s been overloaded with too many; this is an unnecessary amount, so we expect the ingredients inside this fat burner to be mostly underdosed.

However, we won’t come to any conclusions before we examine Thermal Revolution’s ingredient list below. See for yourself: 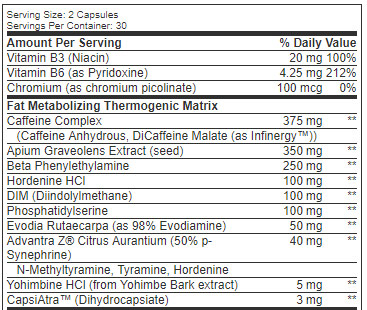 This is a small proprietary blend containing 2 ingredients; caffeine anhydrous and dicaffeine malate.

Now, it doesn’t take a genius to figure out that both of these are stimulants, but this isn’t exactly a good thing, as consuming too many stimulants can cause side effects.

As a result, it’s always safer for companies to add 1 stimulant in a sensible dosage.

It’s also a good idea to keep an eye on the caffeine dosage per capsule serving; it’s sensible to consume under 100mg of caffeine per serving to stay safe from jitters.

The bad news is that Thermal Revolution contains a massive 187.5mg caffeine per serving, which is around the same amount of caffeine in pre workouts per serving. This should give you an idea of how big this serving is, and you wouldn’t want to take this at your office desk for this reason.

You’ll probably laugh when you hear the more common name of this ingredient; celery seed oil…yes, from the same stuff you add to salads and even your spaghetti bolognese.

Anyway, this is a great example of how companies try to ‘dress-up’ some ingredients to make them sound better than they really are.

In all fairness though, celery seed oil can be beneficial to your general health, as it contains high amounts of antioxidants. It’s also believed to be a duiretic, which is why we believe it’s been added to Thermal Revolution.

Why are duiretics added to fat burners? Answer: to fool you into thinking your losing body fat, when all you’re really losing is water weight – which you’ll gain back once you stop taking the diuretic…

Don’t get us wrong, diuretics are great for competitive bodybuilders who need to ‘dry out’ before a competition. But there’s no need for the average gym-goer to be consuming them (and they can even put you at risk from becoming dehydrated too).

Also known simply as PEA, this works in your body by influencing the hormones responsible for your mood. This is why it’s often believed to help you feel happier and improve your cognition.

But the bad news is that Beta-Phenylethylamine isn’t proven to deliver any benefits that’ll help you shift your body fat – which is why we don’t believe it’s a necessary addition to Thermal Revolution here.

This is a compound that’s believed to promote fat loss due to being a component of synephrine. But this isn’t a good thing, as synephrine has been banned after it caused loads of side effects to users.

But the worst part is that Hordenine isn’t actually proven to work in studies, so it’s basically an unreliable ingredient that might cause side effects – not what you want to be consuming.

Now we’re really confused, as we don’t see any need for DIM to be in Thermal Revolution at all.

Why? Answer: it’s believed to stop your testosterone from converting into estrogen, but this is only necessary when you’re taking steroids or pro-hormones.

Not only that, Thermal Revolution is a fat burner, so there’s really no risk of your testosterone levels rising to a dangerous level at all. So DIM is definitely unnecessary here.

This is an amino acid that’s thought to improve cognition.

We don’t know about you, but when our main goal is to lose body fat, we’re not too bothered about improving our memory…

Anyway, this would be a great inclusion to a nootropic supplement. But it’s not needed in Thermal Revolution.

You probably won’t have heard of this before, but it’s been used in traditional Indian medicine for a long time.

It’s believed to be a thermogenic ingredient, meaning it raises your body temperature to increase your metabolism. But the bad news is that no study has proven whether it actually works to promote fat loss.

It’s important to mention that synephrine has been banned from use in supplements in certain countries like UK & Canada. But it’s able to be added indirectly into products through ingredients such as n-methyltyramine, tyramine and hordenine.

As a result, we recommend staying away from this ingredient.

But in case that didn’t put you off, many people have reported this nutrient to cause numerous side effects in the past too.

Yohimbe bark extract is another ingredient that you should stay away from. It contains high amounts of yohimbine, which has also been banned from direct use in supplements.

However, the FDA haven’t banned yobimbe bark extract in supplements yet, so this is still a legal addition in Thermal Revolution. But it’s simply not worth risking its side effects for.

This is a molecule found in capsaicin and is thought to be an effective thermogenic as a result.

There hasn’t been many studies conducted on this ingredient yet, so we can’t confirm whether it works. But early signs suggest that it’s effective. 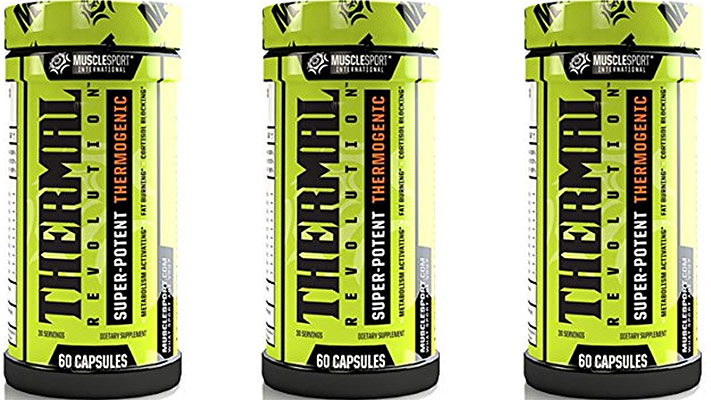 We recommend that you stay away from supplements that contain synephrine or yohimbe bark extract, as they’re both known to cause side effects.

But that’s not all, the massive amount of caffeine in each capsule is likely to have you bouncing off the walls, and if you try consuming coffee while taking Thermal Revolution, then you’ll suffer jitters too.

See the side effects you’re at risk from here:

Not what you’re looking for? See our
– Top Three Fat Burner Supps Here –

We’re not sure how MuscleSport International did their research when formulating this fat burner; it contains many unnecessary ingredients and isn’t really likely to help you burn much fat.

But the worst part is that there’s the risk that you’ll suffer from side effects with this product.

As a result, we can’t recommend you to try Thermal Revolution, as we don’t believe it’s likely to work, or compete with other fat burners at a similar price range.