MuscleTech is quite a big name on the sports nutrition scene. Its Hydroxycut range has been around since the 1990s – and the company’s ads claim the sub-brand is “synonymous with results”.

Seeing as Hydroxycut LeanX Next Gen is highly rated online, we wanted to see whether this $20 dollar product is a bargain or a waste of money.

MuscleTech began as a mail-order business in 1995. Since then, it continues to cement its place as a leading brand all over the world.

The company also goes to great pains to stress the amount of research behind its products.

It claims to have 100 patents and 200 more patents pending and boasts an “army of accredited professionals in specialized fields like pharmacology, chemistry [and] biotechnology”.

To its credit, MuscleTech fully discloses its formulas and never uses proprietary blends.

(Proprietary blends: sub formulas that do not specify the amount of each ingredient).

The formula for Hydroxycut LeanX Next Gen contains a few familiar ingredients. 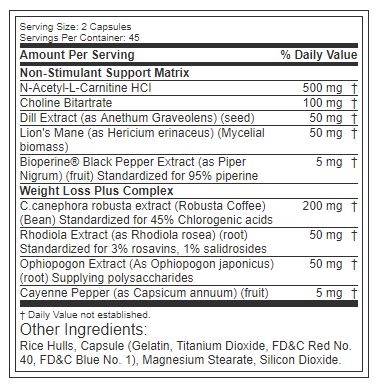 Usually found in the liver, L-Carnitine helps convert your body’s fat stores into energy. N-Acetyl-L-Carnitine HCI (ALCAR) is a more soluble version of this amino acid, which makes it easier for your body to absorb.

Studies show L-Carnitine reduces muscle fatigue and boosts energy and focus – making it great for use in a pre-workout supp. Because of its effect on fat, ALCAR should in theory work well as a fat burner.

However, there’s very little proof that it works for this purpose.

In fact, research suggests any weight loss comes as a result of the energy boost subjects get from taking it.

Choline is a molecule found in eggs, peanuts, liver, spinach and more.

It’s well-known as a cognition enhancer. And an NCBI study suggests Choline may also help your body dispose of ‘trapped’ fats, which in turn could lead to weight loss.

However, more analysis is required to fully assess the benefits of Choline (in supp form) for this purpose.

Until more evidence appears, turn to proven ingredients like Green Tea (and eat plenty of eggs) instead of taking Choline in isolation. Besides this, Choline supplementation tends to inflict users with fishy breath – so we can’t recommend it.

We’re not sure why MuscleTech includes Dill Extract in the Hydroxycut LeanX Next Gen formula.

Various sources suggest the herb may be useful as a diuretic. It’s also believed to be a cure for loss of appetite, high cholesterol, and digestive problems.

We suspect Dill is included here because it’s rich in fiber, which can make you feel full for longer. But this doesn’t make sense considering it’s apparently also used to treat appetite loss.

Whatever the reason for its inclusion, there’s very little evidence to show Dill has any real benefit for its supposed uses – let alone as an ingredient in a commercial fat burner.

The dietary mushroom mostly shows promise as a cognitive enhancer. In different contexts, it may also both stimulate and suppress inflammation (which could make it useful for burning fat).

Studies show Lion’s Mane increases the expression of several fat-burning genes in mice. But as it stands, there’s no proof it performs the same function in humans.

Bioperine is a modified form of Piperine – the active ingredient in Black Pepper. You’ll find Black Pepper Extract in some of the best fat burners on the market – and for good reason.

It contains a host of nutrients (including Vitamins A, C and K) and is used to help absorb other nutrients and make them more effective. It’s also shown to suppress the lipase and leptin hormones, which in turn helps control appetite.

But here’s the problem:

Hydroxycut LeanX Next Gen contains 5mg of Black Pepper – our experience tells us the supp would need double that to achieve optimum results.

The thermogenic helps your liver break down fat and glucose, as well as speeding up your metabolism. It also helps control your appetite by suppressing cravings for sugar and other carbs.

Rhodiola Extract also goes by the name Rhodiola Rosea. With roots in ancient Chinese medicine, this herb is well known for its ability to boost focus and battle fatigue – which makes it an awesome addition to any good pre-workout supp.

But in a fat burner it’s a different story…

Research shows Rhodiola has no influence on weight. And while the herb appears to stimulate the lipase enzyme (which can break down fat), more research is needed to conclusively prove this.

Ophiopogon contains MDG-1, a polysaccharide which an NCBI study suggests may prevent obesity in people with a high-fat diet.

However, this study used mice – and not humans – as subjects. As a result, there is no evidence to show it burns fat in either obese or healthy humans.

We were pleased to see Cayenne Pepper in this supp.

This natural thermogenic contains high levels of capsaicin, making it highly potent fat burner. It works by raising your body temperature, which in turn forces you to burn calories to cool down.

However, Hydroxycut LeanX Next Gen contains just 5mg of Black Pepper Extract – which is disappointing. We’ve found 100mg-150mg to be optimal for fat burning.

A close look at the ingredients in MuscleTech Hydroxycut LeanX Next Gen shows it’s generally safe to use – unless you’re allergic to any of them.

However, Choline can cause fishy breath.

MuscleTech Hydroxycut LeanX Next Gen is a mixed bag. It contains some ingredients we’d expect to see in a fat burner at twice the price of this one.

However, some of these ingredients (L-Carnitine, Rhodiola) would be better placed in a pre-workout than a fat burner.

And while Cayenne Pepper and Black Pepper are awesome thermogenics, there isn’t enough in this supp to achieve the results you want.

Unfortunately, Hydroxycut LeanX Next Gen also contains ingredients unproven to have any effect on fat loss in humans.

As a result of these failings, this supp pales in comparison to the best fat burners on the market.