Described as a ‘Suspension Super Thermogenic’, Performix’s SST claims to be a ‘multi-phase’ releasing fat burner.

As one of the most expensive of it’s kind on Bodybuilding.com – SST costs $62.99 for 60 liquid capsules.

For the amount you get, it’s a pretty steep price. What we really have to ensure, is that the quality is there to back this figure up.

The product is available in both in liquid capsule and powder form. From what I can tell they use a lot of the same ingredients – with the exception of any components to keep either in their respective states.

What’s interesting about the Performix range is that they opt for a time-released process, using layered nutrients inside their products that release more and more as the stomach dissolves them.

Whether if it’s truly effective though is another question.

SST is aimed at raising the following things:

Performix is a supplement company that operates primarily through Bodybuilding.com and GNC – but is also sold on amazon and a handful of other online retailers.

Unfortunately due to these reasons there is no mention of a Money-Back guarantee, anywhere on the Performix site. That responsibility falls on the retailer.

Performix offers a range of products that work around a active lifestyle. All of their supplements (Test Booster, Pre-Workout, BCAAs etc) uses a time-released function by ‘multi-coating’ their nutrients. Whether this truly makes a difference, or is just a selling gimmick is yet to be proven.

SST is suggested to be taken as 2 capsules in the morning on an empty stomach – and not to be taken 6 hours before bedtime or after. This is the only serving of SST recommended a day.

This is because Performix claims SST is split up into several phases due to it’s time-released function.

I usually take issue with fat burners recommending one daily serving. However, due to the nature of the time release in this product – however I have read mixed reviews about it’s effectiveness. Giving it the benefit of the doubt for servings – I’ll find out how effective this product is in the ingredients. However, the majority of the product unfortunately is represented under a proprietary blend. 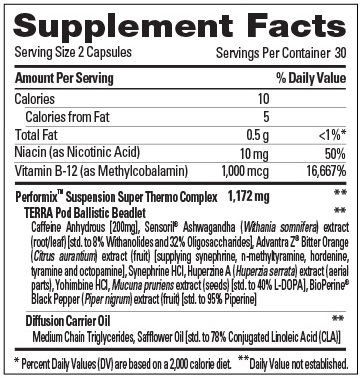 Vitamin B12 – This is supposedly the key ingredient to the final phase of SST to help further energy production. It is known to cause metabolic reactions in the body to raise metabolism and spike energy levels.

Caffeine Anhydrous – A potent stimulant that boost energy levels and metabolism. It is a great ingredient and a key ingredient to most effective fat burners.

Ashwagandha – This ingredient could help with fat loss very indirectly. Known to lower cortisol (stress hormones) in the body, Ashwagandha is used to help raise testosterone (which is actively blocked by cortisol). The uptake in testosterone, could promote muscle mass and decrease fat gains. However it is known to have side effects.

Bitter Orange Extract/Synephrine – The main nutrients out of Bitter Orange Extract is synephrine. Both of which have been seen to cause mild rises in energy levels, however they do not actively help burn fat according to recent studies. Synephrine can also cause side effects such as headaches, raised blood pressure and up the risk of heart attacks and strokes.

Huperzine A – A natural cognitive enhancer that inhibits the enzyme that degrades the learning neurotransmitter acetylcholine. Although to ensure maximum effectiveness – this nutrient is supposed to be cycled. And has also been seen to carry several side effects.

Yohimbine HCl – A well known fat burning nutrient. It is highly stimulating and can also be used as an aphrodisiac. However due to this product being a proprietary blend, it is unclear whether enough of this ingredient has been included to be effective. 0.2mg/kg bodyweight is the recommended amount – exceeding that dosage however can result in symptoms like anxiety and hypertension.

Black Pepper – This is to help with the overall absorption of the ingredients, however where it factors in to the suspended release of the product may compromise its effectiveness.

Unfortunately due to SST being a proprietary blend, it’s difficult to say if it’s ingredients do cause side effects. However as Performix has opted to hide their actual measurements for the products components, we have no choice but to fear the worst.

We’ll start with Bitter Orange Extract. When mixed with caffeine this product can become dangerous. It increases the risks of heart attacks, strokes and high blood pressure, it can also cause headaches in some users. It has been proven to be ineffective as a fat burner – the best course action would be to remove it entirely.

Ashwagandha can also cause side effects, however they are not as severe. Affecting more of the digestion process, Ashwagandha can cause diarrhea, stomach cramps and vomiting.

Yohimbine is well documented to cause anxiety, hypertension and gastrointestinal distress when taking in large amounts.

And too much Huperzine A causes numerous symptoms such as vomiting, sweating, blurred vision, nausea, slurred speech, cramping and much more. It’s not an ingredient you want to take lightly – and one that should have it’s dosage carefully documented on this product.

Getting close up and personal with SST – it’s clear that is a product that should be avoided.

Now it can be argued that it uses a lot of key ingredients – but how much of each is enough, and how do you know the proprietary blend provides that.

Then there are the potential side effects… and there are a lot. It’s also worth thinking about this new form of time-released serving, and if it’s effective.

There’s too many ‘why’ and ‘if’ questions on this product to purchase it at the price of $62.99. I suggest you spend your money elsewhere or hope at some point, Performix decide to re-evaluate the nutrient table and the product’s transparency.