According to the Pure Labs website, T6 Black (also known as T6 Black Revolution) is “THE REVOLUTION IN TOTAL APPETITE DESTRUCTION.”

Having reviewed lots of fat burners before, we’re used to these posturing taglines – and we usually ignore them. We just want to know if it’s any good.

While these promises are nothing out of the ordinary, that all sounds pretty good. Here’s our T6 Black review…

We can’t find much about Pure Labs on the website – and we can’t tell whether it’s the name of a company or just a brand. It always makes us a little suspicious when a brand a doesn’t disclose its credentials – what have they got to hide?

Nonetheless, the claim to avoid “gimmicks” and “empty promises” is always nice to read.

The guys at Pure Labs also say that fitness is a lifestyle for them and that the “quality and effectiveness” of their supplements reflects this.

If this is true, then maybe – just maybe – T6 Black could become one of our favorite fat burners. But if these claims are nothing more than empty bluster, we may be in for a bumpy ride during this T6 Black review.

One great thing about the Pure Labs products we’ve tried is the lack of proprietary blends – and we’re happy to report this T6 fat burner follows suit. 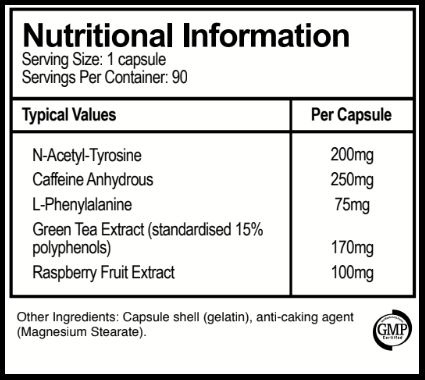 N-Acetyl-Tyrosine (NALT) is an amino acid thought to be a focus booster, mood enhancer and a fat-loss aid.

The evidence for NALT as a focus booster and mood enhancer

Research shows NALT reduces stress, focus and subjective well-being in subjects. So in this regard, T6 Black’s claim to be a mood enhancer has some truth in it.

The evidence for NALT as an aid to fat-loss

The notion that L-Tyrosine helps users cut fat appears to be nothing but hearsay. There’s some evidence that mixing Tyrosine with Caffeine, Green Tea, Cayenne Pepper and Calcium can reduce body fat in obese people.

However, there’s no evidence this five-ingredient combo can do the same in otherwise healthy people. In isolation, NALT doesn’t affect fat loss.

According to experts from Villanova University, 90% of American adults use Caffeine on a daily basis. But it does much more than help you stay awake at work or during a boring class.

Caffeine has a mild thermogenic effect. This means it raises your core temperature, which forces your body to burn more calories to cool you down.

The popular stimulant also replaces energy and reduces the fatigue you can feel when cutting your calorie intake.

How does Caffeine work – and how much do I need?

Caffeine binds to the adenosine receptors in the brain. By blocking the flow of adenosine (the sleepy chemical), Caffeine helps you stay alert.

To take full advantage of all Caffeine’s fat-burning benefits, you need between 300mg and 350mg of Caffeine each day. Ideally, you should split this into four equal doses to avoid energy crashes.

T6 Black contains 250mg of Caffeine, which isn’t enough for daily use. But the serving size (one capsule per day!) means this supp gives you too much in one hit. Such a high single serving could give you jitters or make you anxious.

L-Phenylalanine is a building block of protein. Research from the 1970s and 1980s suggests the non-essential amino acid may help reduce symptoms of depression. So more research is needed to confirm L-Phenylalanine is useful as a mood enhancer.

It’s also been suggested this ingredient can suppress the appetite. But unfortunately, studies show L-Phenylalanine doesn’t reduce hunger or help you lose weight.

Along with Caffeine, Green Tea is one of the two best ingredients in T6 Black. Its active ingredients are catechins, which are proven to help users reduce fat and maintain a healthy weight.

Catechins increase the amount of Glycerol and help the body break down more fatty acids. They even stimulate the release of norepinephrine – a chemical which speeds up your metabolism,

For optimal fat burning, the ideal dose of Green Tea is around 500mg. With this in mind, it’s too bad T6 Black contains a measly 170mg.

We’re unsure whether this ingredient is Red Raspberry Leaf or Raspberry Ketone. For this reason, we need to take a look at both…

Red Raspberry Leaf is said to reduce labor pains during childbirth. Some also claim it can treat stomach problems, skin rash, diabetes and a number of other conditions.

It’s possible it could be included here because of the claim that it reduces water retention (and therefore aids weight loss), but this is largely unfounded.

Raspberry Ketone is widely marketed as a fat burner. However, this compound does not reduce fat mass. 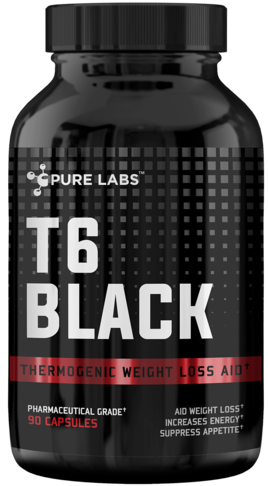 On the whole, T6 Black is safe to take. However, the high single serving of Caffeine (250mg in one hit) may cause anxiety or jittery feelings.

The T6 Black fat burner doesn’t quite live up to Pure Labs’ promise to avoid gimmicks or empty promises.

Unlike the brand’s Turbo Cuts, which contains just one decent nutrient, T6 Black uses three great ingredients (out of five) that do as claimed – for the most part.

Caffeine is an awesome energy booster and fat burner, while Green Tea is a potent thermogenic. Meanwhile, NALT can improve mood.

The dosing of the good ingredients isn’t great – this supp contains too much Caffeine in one serving (and not enough for daily use), while it also holds less than 50% of the Green Tea most people need for it to be effective.

T6 Black also contains two unproven (or pointless) ingredients in L-Phenylalanine and Raspberry Leaf Extract, neither of which help you shed fat.

This supp is also missing a number of key ingredients, such as Glucomannan (an appetite suppressant) and Cayenne Pepper (a potent thermogenic weight-loss aid).

While this T6 fat burner isn’t too bad, it ain’t brilliant either. There are far better fat burners on the market.