QuadraLean Thermogenic is billed by RSP Nutrition as “the thermogenic counterpart of our best selling weight loss solution.”

Now, we love thermogenics – so we’re eager to see what this inexpensive product can do. Here’s our RSP QuadraLean Thermogenic review:

This fat burner claims to:

We were very disappointed with RSP Nutrition’s QuadraLean when we reviewed it a while back. Let’s see whether QuadraLean Thermogenic is any better…

RSP Nutrition claims to provide “smart and effective” supplements that “inspire people to pursue a more balanced and active lifestyle.”

Founded by former student athletes, the company says it borrows from student athlete culture and that it values “hard work, dedication, integrity, and innovative thinking.”

Reassuringly, the guys at RSP promise “we wouldn’t sell you something we wouldn’t take ourselves.”

(Recap: Proprietary blends don’t specify the amounts of each sub-ingredient. This gives you no way of assessing their potency.)

The US version includes different ingredients to the one sold in the UK. This is probably because Yohimbe is banned for use in British supplements. The US version contains Bitter Orange and Yohimbe (which may be dangerous).

For this review, we focus on the US version of QuadraLean Thermogenic…

Your body doesn’t naturally produce this mix of essential fatty acids, so you have to get it from your diet.

Many believe CLA burns fat due to its ability to increase PPAR gamma expression (found to be low in obese people).

Well, researchers have published many studies on the fat-burning effects of CLA, but the varied results fail to conclude it can help you cut fat or lose weight.

Acetyl-L-Carnitine Hydrochloride (ALCAR) is a more soluble version of L-Carnitine.

The amino acid boosts energy and focus, as well as reducing muscle damage. As a result, you’ll find ALCAR in some of the best fat burners on the market.

But why has RSP included ALCAR in this fat burner?

L-Carnitine helps your liver convert fat into energy. And there is some evidence it can help elderly people burn fat. However, the limited research on L-Carnitine in young people and healthy adults failed to show it has any benefit for this purpose.

Oh dear. We DO NOT recommend taking Citrus Aurantium (AKA Bitter Orange).

The active ingredient is Synephrine. And its chemical structure is similar to Ephedrine and Ephedra – both of which are banned by the Food and Drug Administration (FDA) in the US.

Despite not yet taking their (rightful) place on the FDA’s banned list, there are many reports of “adverse cardiac events” in those taking both Bitter Orange and Synephrine.

But can it burn fat?

While limited research suggests Bitter Orange can increase the metabolic rates of otherwise healthy subjects, the existing studies are unreliable – none of them took place under strict conditions.

Bitter Orange is also often touted as an appetite suppressant, although there’s little proof of its efficacy for this purpose.

As we’ve said elsewhere many times, it is never good to include an unproven ingredient in a fat burner.

Besides, the reported health risks mean Citrus Aurantium (or Bitter Orange) and Synephrine are ingredients to avoid.

Caffeine is an awesome fat burner – and it’s a worthy addition to any decent supp of this kind. The stimulant inhibits your adenosine receptors (which allow you to relax and sleep).

This induces a ‘fight or flight’ state which mobilizes fatty acids and helps you lose the chunky excess. Best of all, Caffeine does this while also sparing glycogen – which means you cut fat without losing muscle.

In a fat burner, the optimal amount of Caffeine is 300-400mg. So on first glance, it may seem there isn’t enough of the stimulant in QuadraLean Thermogenic.

But Caffeine has no place in this supp. Here’s why…

The mix of Caffeine and Bitter Orange can cause high blood pressure and increase your heart rate.

Studies show it can help reduce the build-up of fat in your liver. However, Choline is one our list of ingredients to avoid in a supplement.

Because it can cause your breath to smell like rotten fish. So while it might have some benefit as a fat burner, the possible side effects just aren’t worth the risk.

Alpha GPC is a rich source of Choline, which can help your liver shed fatty acids. In fact, Alpha GPC is considered a superior form of the molecule (compared to Choline Bitartrate).

But we’re puzzled by the use of Alpha GPC in QuadraLean Thermogenic. This is because the fat burner also contains Choline Bitartrate.

And as we never recommend Choline supplementation due to its possible unpleasant side effects (fishy breath), we can’t advise taking Alpha GPC either.

Yohimbe Extract is the bark of a plant hailing from central Africa.

Its active ingredient is Yohimbine – an indole alkaloid proven to burn fat. This fat-burning compound works by increasing adrenaline in the body and by inhibiting fat-cell regulation.

But there’s no proof Yohimbe (as a whole) has the same benefits as Yohimbine in a supp – and it’s important not to confuse the bark and its active ingredient.

But it gets worse…

Research shows Yohimbe can cause both hypertension and hypotension, as well as “generalized weakness.”

Please note: In the UK, Yohimbe can only be sold in registered pharmacies and under the supervision of a qualified pharmacist. It’s banned for use in supplements.

Cayenne Pepper Fruit Extract is an awesome thermogenic – and it’s the only one we’re pleased to see on the list.

Cayenne Pepper is rich is capsaicins, which lend the fruit both its fiery taste and its fat-burning power. It works by raising your core temperature. This then forces your body to work harder (and burn more calories) to restore itself to normal.

However, this supp doesn’t contain enough of this thermogenic (20-25% of the optimal amount) to have much use as a fat burner. 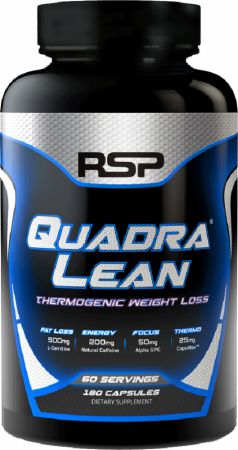 RPG Nutrition’s QuadraLean contains Bitter Orange and Yohimbe. These ingredients can cause the following heart problems:

When mixed with Caffeine, Bitter Orange can:

RSP Nutrition’s QuadraLean Thermogenic is one of the worst fat burners we’ve ever seen.

It contains Bitter Orange – a source of Synephrine. Both the fruit extract and its active ingredient have been linked many times with a wide range of heart conditions.

So while there is limited evidence it can burn fat, the risks are just not worth the possible benefits.

We usually like Caffeine in our fat burners. And on the face of it, this supp contains (almost) the perfect amount.

But here’s the problem…

Combined with the Caffeine in this supp, Bitter Orange can shoot your blood pressure through the roof and speed up your heart rate beyond normal levels.

Then there’s Yohimbe Bark. While it’s active ingredient, Yohimbine, is proven to burn fat, there’s no evidence that ingesting the bark (as a whole) has the same effect.

Yohimbe may also lead to both hypertension and hypotension – and it’s actually banned for use in UK and EU supplements (due to the health risks).

Mix these potentially dangerous ingredients with a bunch of unproven or worthless elements and you have a recipe for a fat-burning disaster.

Is ANYTHING good about QuadraLean Thermogenic?

At first glance, we thought Cayenne Pepper might be this supp’s one saving grace – but there’s about a quarter of the amount you need to get the best results.

Even L-Carnitine (great for pre-workouts) is unproven as a fat burner for otherwise healthy people.

So – in case you haven’t guessed by now, we DO NOT endorse QuadraLean Thermogenic. In fact, we recommend you stay well away from it.

Instead, buy a safe and natural fat burner packed with all the ingredients you need to cut fat and achieve your dream physique .