It’s been on the market a while now, and although the somewhat ‘cheesy’ design stands out in a crowd – I can’t imagine it brings in the kind of attention that the company was hoping for.

No, what really attracted me to reviewing this product was the price. Even if it doesn’t look great – with a few effective ingredients this could be a bargain at $19.99 on Bodybuilding.com.

But first we have to prove if those ingredients are there.

Let’s start out by by looking at what Ripped Fuel Physique claims to do:

The second feature, not being so much what the product does but what it aims to accomplish.

It’s a bit of a confused message. But before we get into that – let’s look at the company.

Possibly one of the oldest supplement companies in the industry, Twinlab was formed in 1968.

Offering a wide and extensive range of supplements, Twinlab not only supplies sport nutrition but also products that cater to prenatal women, children, dieters, every nutrition, organ support and tea.

It’s lifespan is in this industry alone proves some kind of testament to it’s quality – however we can only know for sure after consulting the ingredients profile.

For serving, Ripped Physique recommends spending the first 3 days taking half a daily dose (2 capsules). After tolerance levels have been reached, you can progress to 4 capsules a day. Which makes me think you this fat burner is taken twice a day, in doses of two capsules.

Two doses per day isn’t the greatest method for effective fat burning. The best results have been seen in products that use 3-4 servings per day. This ensures that the body’s thermogenesis is consistently elevated to burn the most energy.

So the servings, are looking mediocre. Let’s see how the ingredients are doing: 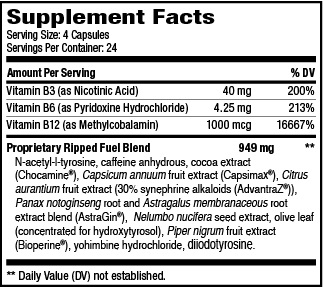 Vitamin B3 – In this case as Nicotinic Acid. B3 is good for suppressing an appetite – as it increases leptin levels which is the hormone that lowers hunger.

Vitamin B6 – This vitamin’s major function is to suppress appetite by turning glycogen in the body into glucose. This stops most cravings for carbohydrates.

Vitamin B12 – B12 is known for increasing energy levels. Collecting together fats and proteins, B12 performs metabolic reactions in the body that increase metabolism and boost energy levels.

Unfortunately the rest of this product falls under a proprietary blend – which makes it difficult to determine how effective the nutrients in Ripped Fuel actually are as their actual measurements are undisclosed.

N-Acetyl-L-Tyrosine – Working with dopamine and noradrenaline in the body, Tyrosine has been seen to reduce stress levels and improve focus.

Caffeine Anhydrous – This stimulant is an asset to any fat burner. Not only does caffeine boost focus and energy levels, it also speeds up the metabolism promoting weight loss.

Cocoa Extract – Believed to have cognitive and cardiovascular benefits. However, these have only been seen in much higher dosages of dark chocolate in the 25-40g area. An effective amount may not be in this product.

Capsicum Annum Fruit Extract – This is a strong thermogenic. CA is the component that gives chili it’s heat. When ingested into the body, the CA raise the body’s core temperature. The body uses extra calories attempting to cool itself down. This allows you to burn more fat, with less effort.

Citrus Aurantium – This is bitter orange extract, known for it’s partially stimulating component synephrine. Proven to not actually help with weight loss, synephrine is continually put into supplements but provides no real benefits.

Panax Notoginseng – Also known as Pseudoginseng, and thought to reduce blood pressure and blood vessels. This may help when dealing with stimulants, however, so far Notoginseng has been proven to be ineffective.

Astragalus Membranaceous – In this form and not as the astragalus root, an effective dose can start from as a small as 5mg. It may help the immune system and in very high doses (0.3mg/kg bodyweight) cause Diuresis to shed any water weight.

Nelumbo Nucifera – Known as the Indian Lotus flower. Due to it’s structure Nucifera is thought to have anti-depressant and anti-diabetic qualities. However, no studies have taken place in humans to prove this theory. The optimal dosage for this ingredient is unknown.

Olive Leaf – Thought to lower oxidation levels of LDL (build ups in the arteries) it is a powerful anti-oxidant and works best in large doses. Olive Leaf has also been seen to mildly lower blood pressure over a period of weeks with daily supplementation. It may have been included in Ripped Fuel Physique as a way of preventing high blood pressure or any potential clots in the body.

Piper Nigrum fruit extract – This is just black pepper. Used to increase the bioavailability in the body – it helps the body to absorb more nutrients from this product.

Yohimbine Hydrochloride – Is known to be an effective fat burner. However it has been recorded to cause hypertension and anxiety in some users more sensitive to its effects. The standard dosage for fat burning is estimated to be 0.2mg/kg body weight.

Diiodotyrosine – There’s not a lot of research associated with DIT in a fat burning sense. That said it has been seen to help optimize thyroid levels which may aid the regulation of hormones.

As this is, for the majority a proprietary blend, I would say there are a risk of side effects.

Synephrine, Yohimbine and Caffeine Anhydrous can all cause problems if their dosages are off in this blend, if they been used too much.

Firstly, the synephrine. Known to react badly with caffeinated substances, synephrine has been seen to increase the risk of heart attacks, strokes and is also known to cause headaches in some users. Worst of all, it’s not even that effective.

Yohimbine on the other hand can cause different problems. Although an effective fat burner, it has been seen to cause hypertension, anxiety and gastrointestinal distress when used in larger amounts.

Caffeine is a great fat burning nutrient – but not knowing its value is a worry. Too much of it may cause nausea, headaches and dizziness. Hopefully it’s been measured to a safe amount in Ripped Fuel Physique.

After first being drawn to Ripped Fuel Physique for it’s price – I still don’t believe it’s worth the money. The only thing you know you’re getting for certain in this product is vitamin B, the values of the rest of the nutrients are unclear.

In addition to this, there runs a risk of experiencing side effects due to the combination of synephrine and caffeine in this product. Yohimbine has also been seen to cause side effects when too much is added.

The best way to avoid these side effects, is to avoid this product altogether – it really seems you get what you pay for with Ripped Fuel Physique , which appears to be not a lot.

If you are looking to burn fat and considering Ripped Fuel Physique, I would strongly suggest expanding your budget. This product just isn’t up to standard.