RoxyLean is a fat burner and yet another product from BPI Sports. The company website describes RoxyLean as a “highly-concentrated thermogenic” that “will have you shedding pounds in no time.”

So it appears RoxyLean offers the same benefits as some of the best fat burners out there. But at $21.99, can it hold its own against other higher-priced supplements? Find out in our RoxyLean review…

BPI Sports is a US-based supplement company. Its products include test boosters, pre-workouts, creatine and protein powders, and even “premium apparel.”

The company website claims its employees are “passionate about health and fitness” and about “being the best versions of ourselves.”

It goes on to say that it uses the same discipline and commitment to make supplements as you’d expect from a health fanatic following a dedicated exercise regime.

RoxyLean Ingredients and How They Work

If you’ve read our reviews before, you’ll know one of the first things we look for in a supplement are proprietary blends.

Note: Proprietary blends are lists of ingredients that show you each nutrient, but not the individual doses. We can’t stand them because they give you no way to tell how much you’re getting for your money. 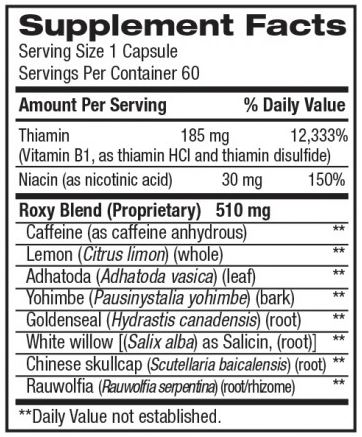 As you’re probably aware, Caffeine is a popular stimulant known for its ability to reduce tiredness and improve focus.

The stimulant works by antagonizing the adenosine receptors, which make us feel relaxed.

Over the years, numerous studies have shown Caffeine also increases running capacity, reaction time and endurance, while also slowing down the rate of perceived exertion.

To burn fat efficiently, the perfect daily dose of Caffeine is 150-200mg. But as the key ingredients in this fat burner are wrapped in a large proprietary blend, there ‘s no way to know whether RoxyLean’s Caffeine content is optimal or not.

Lemon is healthy – but it won’t help you burn fat or lose weight.

A number of sources online claim Lemon – or Lemon Juice – can help you shed the spare tire, but that isn’t true. In fact, there’s a slew of rumors about Lemon Juice, but none of them are true.

These include the unproven idea that it can suppress your appetite.

At best, Lemon may aid digestion and help regulate the rate at which you absorb sugar. But there is zero evidence to show this directly translates to weight or fat loss.

However, there is very limited research on the plant and there is absolutely no evidence that it burns fat or can help you lose weight.

Along with Bitter Orange Peel, sits high on our list of ingredients to avoid in a fat burner – or any supplement for that matter. This is because Yohimbe – and its active ingredient, Yohimbine – has links with severe side effects.

These include cardiac arrest, rapid heartbeat, kidney failure, and seizures. Some users also report the onset of redness in the eyes after taking Yohimbe.

Well, one study suggests Yohimbe may reduce fat mass in both lean and obese individuals.

However, the reported benefits are just not worth the potential health risks. We wouldn’t usually touch Yohimbe with a ten-foot pole – and neither should you.

Golden Seal is a perennial herb that’s native to Ontario, Canada and the Great Lakes region of the southeastern United States.

As an endangered herb, Golden Seal is very expensive; Walmart sells it for $259 per pound. As RoxyLean costs around $22, it’s unlikely to contain a massive amount.

The BPI Sports website says it uses Golden Seal for its diuretic properties, and for its ability to eliminate toxins through sweat and urine. In fact, cheating athletes have reportedly used the herb to mask the use of illegal drugs during tests.

But despite unsubstantiated claims to the contrary, there’s no proof Golden Seal burns fat or reduces appetite.

Also known as Salix Alba, White Willow is a species of tree native to parts of Asia and Europe.

The guys at BPI Sports say RoxyLean contains White Willow because “the herb is believed to extend fat burning effects when combined with other ingredients.”

Despite this claim, we can find no scientific research to back it up. And the use of the word “believed” also bothers us – what they’re saying is that they’re using groundless hearsay, rather than actual science, to justify using it. That’s just ridiculous.

Chinese Skullcap is used in traditional Chinese medicine to promote cognitive and cardiovascular health, as well as bleeding disorders.

In fact, it contains flavonoids which may activate the PPARα protein, which could in turn help burn fat. But while Chinese Skullcap deserves further investigation for this purpose, that isn’t enough to warrant its use in this fat burner – for the moment, at least.

Rauwolfia Serpentina (aka Devil Pepper or Indian Snakeroot) is a type of flower native to India and East Asia. It contains ingredients which are said to treat high blood pressure and schizophrenia.

Its rep as a fat burner comes from the fact that it contains Yohimbine, which despite being possibly unsafe, may help induce thermogenesis.

But as RoxyLean already contains Yohimbine, it seems extreme to include more of it – especially considering its long list of possible side effects. 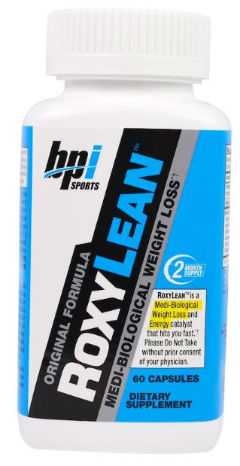 By and large, the ingredients in RoxyLean are safe to take. However, Yohimbe has been linked with the following severe side effects:

Going into this RoxyLean review, we had an open mind. After all, it’s quite a well-regarded fat burner in some circles.

But even considering the low price, RoxyLean has hardly any redeeming features. Yes, it contains Caffeine, which is a great stimulant. Yet as the proprietary blend hides the dose info, there’s no way of knowing how much Caffeine this supp contains.

The only other good thing to say about RoxyLean is that Chinese Skullcap shows promise as a fat burner. So what’s the problem? It remains untested.

Besides that, this fat burner contains either potentially unsafe ingredients (Yohimbe), or those without any scientific backing as fat-burning ingredients (Adhatoda, Golden Seal).

RoxyLean has to be one of the weakest fat burners we’ve come across. So here’s our advice: ignore RoxyLean and look for a fat burner with potent, proven and safe ingredients.