Shredabull Untamed is a fat burner from Anabolic Designs (AD). It replaces the original AD Shredabull and retails for $48.99.

US-based Anabolic Designs started in 2009 and offers a range of products under the Project AD brand name. In addition to fat burners, these include water management supplements, BCAA, digestive aids, and cardiovascular support.

The company claims to be “committed to effective formulas that flat-out work.” It goes on to say s”science and innovation are at the heart of our brand.”

Project AD has several brand ambassadors, all of whom appear to be bodybuilders. These include Luke Hulme, Matt Jansen, and Austin Stout.

As soon as we pick up the Shredabull bottle, we see it contains THREE proprietary blends. This is never good to see.

Note: Proprietary blends are sub-formulas that show you ingredients, but not dosages. Hiding vital dose info is an all-too-common industry gimmick that ensures you don’t know what you’re paying for. It also increases your risk of unpleasant side effects. 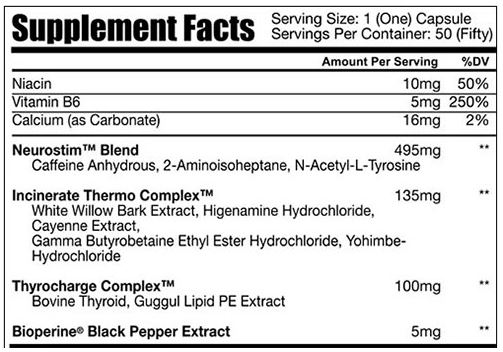 As you no doubt know, Caffeine is a hugely popular stimulant – and it’s always great to see it in any fat burner.

The stimulant helps you burn fat through thermogenesis. In other words, Caffeine heats up your body and forces it to burn more calories to return to normal.

It also gives you more drive and helps make you feel more alert when you lose energy on a low-calorie diet.

How much Caffeine do you need?

The Caffeine in Shredabull Untamed is part of a proprietary blend of 495mg.

As a result, there’s no way of knowing how much Caffeine there is here. Bearing in mind this product’s serving size is one capsule per day, this could cause two issues…

One, if there’s more than 100mg in the single serving, this could make you feel jittery. And two, less than 300mg is ineffective for round-the-clock fat burning.

It’s a psychoactive nervous-system stimulant with a similar structure to banned substances like DMAA, Ephedrine, and AMP Citrate.

This fact alone is worrying. But it becomes even worse when you realize there are no studies in reputable journals showing whether DMHA is a) safe or b) actually works.

It also speaks volumes that DMHA appears to be disappearing from many products – is this a sign it’s ineffective or unsafe? Possibly.

N-Acetyl-L-Tyrosine (NALT) is an amino acid with a popular reputation as a brain booster. You’ll also see it many fat burners for its supposed ability to reduce fatigue. However, research shows NALT has no effect on fatigue and is therefore a useless ingredient.

Some early research suggests that in combination with cola and ephedra (a banned substance), White Willow Extract may induce slight weight loss in obese or overweight people.

However, there’s little evidence it does the same in isolation, or with the other ingredients in the Shredabull Untamed formula.

Higenamine is derived from several plants, including aconite, annona squamosa, and Nandina. And it’s used in fat burners due to its mechanism reflecting that of Ephedrine (a banned ingredient).

However, there’s currently no human evidence Higenamine burns fat. The chemical is one of the main components of aconite, which can cause serious heart-related side effects.

Higenamine is an ingredient to avoid.

Cayenne Extract (aka Cayenne Pepper) is a powerful thermogenic and another key fat-burning ingredient. It contains Capsaicin, a compound responsible for both the pepper’s spicy taste and its ability to boost your metabolism and burn fat.

But unfortunately, the guys at Anabolic Designs hide the dose info in their Incinerate Thermo Complex proprietary blend.

This means there’s no way to tell whether there’s enough Cayenne to help you get the results you want (100mg is ideal).

Gamma Butyrolactone (GBL) is a chemical used to improve athletic performance, virility and sleep quality. It also has a reputation as a fat burner and muscle builder.

However, there is no scientific evidence GBL has any uses for these purposes.

Yohimbe is one of a handful of ingredients that we always recommend avoiding.

This ingredient and its main subset, Yohimbine, increase adrenaline in the body, which can result in weight and fat loss.

However, Yohimbe may also cause a long list of side effects, including chest pain, heart attacks, headaches, nausea and vomiting.

While still a prescription drug in the US, the fact Yohimbe is banned in several European countries speaks volumes. As a result, it’s clear the possible benefits just aren’t worth the risks.

The use of Bovine Thyroid as a fat burner is a growing trend. However, beyond a few unreliable internet sources, there’s little to no evidence it plays any role in burning fat.

Bovine Thyroid is only available on prescription in the UK. And as it’s part of the Thyrocharge Complex, there’s no telling how much Shredabull Untamed contains, or how much it’ll mess with your hormones.

Guggul is a plant containing the active ingredient, guggulsterones. Traditionally used to help manage obesity, there’s still no reliable research to show it can help users shed the spare tire.

But as Shredabull Untamed contains potentially unsafe ingredients like Yohimbe, the presence of Black Pepper is a cause for concern.

While most fat burners we review are mostly safe, Shredabull Untamed contains a few ingredients that are a cause for concern.

Yohimbe, which may cause the following side effects:

In extreme cases, Yohimbe has also been known to cause:

It’s also worth noting DMHA is a close relation of banned substances like Ephedrine and DMAA. So while no-one knows how safe DMAA is, the signs should be a cause for concern.

Meanwhile, the mechanism of Higenamine is similar to the illegal substance Ephedrine. It’s also a main ingredient in aconite, which WebMD describes as “unsafe when taken by mouth.”

Shredabull Untamed is up there with the WORST fat burners we’ve ever come across.

The only good bits

Shredabull contains Caffeine, which replaces the energy you lose when cutting your calorie intake. Meanwhile, Cayenne Pepper is a potent thermogenic that is proven to boost metabolism and help shed fat.

All the bad bits

First off, Shredabull contains THREE proprietary blends – this is a cheap marketing trick that allows brands to fool consumers into thinking they’re buying a better a product (they aren’t).

As a result, there’s no way to tell whether there’s too little or too much of each ingredient in this fat burner (but that may be the point).

Second, this supplement contains Yohimbe, which has been known to cause a long list of severe side effects and interactions. It also contains DMHA and Higenamine, which have close relationships with unsafe and/or banned ingredients.

If you haven’t already guessed, we’re not fans of Shredabull Untamed – this is a fat burner to avoid.

Luckily, there are some good fat burners out there – look for one with safe, natural ingredients that are proven to work.