You can’t deny that Cellucor are a massive company in the supplements industry. So whenever they release a product, we always get excited, and keen to find out how effective it is.

We’re surprised that Cellucor hadn’t added any ingredients shown to supress your appetite; for us, this is a key benefit that all fat burner supplements should deliver.

But that’s still not stopping us from going deep into the ingredient list of SuperHD Ultimate in this review. Take a look:

We’ve already mentioned that Cellucor are a big sports nutrition brand. They’re based in Texas, USA, and have become best-known for their C4 pre workout supplements series.

But we’re here to review their fat burner, SuperHD Ultimate, so let’s get on with it below.

Alright, so we can’t start examining the ingredient list for SuperHD Ultimate until we point out something; Cellucor’s fat burner contains a proprietary blend.

What’s a proprietary blend? Well, this is a mixture of numerous ingredients that’re only shown to you as 1 quantity (in this case, the overall quantity is 925mg).

But that’s not the worst bit; the ‘Ultimate Ignite & Fuel Blend’ contains caffeine, which is actually quite dangerous. Why? Because large amounts of caffeine can cause side effects like jitters and energy crashes.

Anyway, we’ll explain all of this in more detail as we explain the pros and cons of each ingredient. See for yourself:

We mentioned that caffeine can be potentially harmful in large dosages (causing side effects like jitters and crashes). Well, no-one knows the exact dosage inside SuperHD Ultimate – putting you at risk.

This is exactly why we recommend you to avoid supplements containing proprietary blends (especially when they contain stimulants such as caffeine).

Otherwise known as Dichrostachys Cinerea, not much is known about this ingredient. The only positive thing we found about it, was that it hadn’t shown to be toxic.

The bad news is that this ingredient hadn’t shown to help you lose body fat, meaning it’s an ineffective nutrient in SuperHD Ultimate.

This is quite a popular fruit, and is even important in the Hindu religion. Indian gooseberry is believed to improve your general and cardiac health, but no studies have shown whether it can actually promote fat loss.

In a nutshell, the only way Indian gooseberry would be useful, is if it actually worked to lower your blood sugar levels. This would help you suffer from insulin spikes less, allowing your metabolism to stay high.

However, the problem is that not many studies have actually proven that it delivers this benefit – making this an unreliable ingredient.

Cayenne pepper is known as a spicy chilli pepper – it’s able to raise your body temperature, therefore increasing your metabolism and ability to burn fat.

If you’ve ever eaten cayenne peppers before, then you’ll know how effective this can be. As we mentioned, it’s proven to work in numerous clinical studies, and you can’t argue with that.

However, the fact that cayenne pepper extract is inside a proprietary blend is letting it down; no-one can see whether it’s contained in an optimal dosage or not.

Again, this is a great example of why we don’t like proprietary blends.

This is the first time we’ve seen aeriel parts extract in a fat burner. After doing our research, we found that this is believed to be a great alternative to Prozac…so we’re not sure why Cellucor has included this ingredient in their fat burner.

So in effect, this is basically an antidepressant. Not exactly needed here.

You’ll know this ingredient without us having to explain it for you. But you might not be aware of the benefit that black pepper extract can deliver – it’s shown to improve the absorption rate of supplements that it’s contained in.

It’s not the best nutrient in SuperHD Ultimate, but it’s definitely useful. 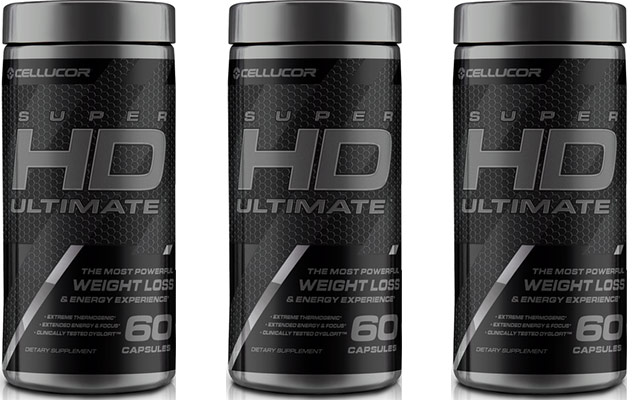 The worst thing about SuperHD Ultimate, is that it all of its ingredients are inside a proprietary blend – with caffeine being one of them.

Why is this bad? Well, caffeine can cause jitters and crashes in large amounts; the problem is that no-one knows the exact amount inside SuperHD Ultimate, putting you at increased risk of side effects.

See the side effects you might suffer from here:

We’ll get straight to the point; SuperHD Ultimate isn’t the best product that Cellucor has produced. We never recommend supplements containing proprietary blends, because they can cause side effects, as you can see above.

As a result, there are many better fat burners to choose from than SuperHD Ultimate.