Self-proclaimed ‘the strongest fat burner from Biogen Health Science’, there has been a lot of conversation regarding the T5 Fat Burners. It has definitely sparked my interest.

While I was researching fat burners, I recently stumbled across the T5 series. They do a wide range of fat burning capsules, serums and patches. I opted for the capsules, out of compatibility with the other products I’ve reviewed for an easier comparison, also a weight loss patch sounds terrifying.

The main reason that intrigued me about T5 was one question in particular that was raised on the Amazon UK website:

The sheer defensiveness of that question and the that the pill had apparently shrank someone 25cm shorter, was enough to convince me to do a review.

The customer had a point. Read through any one of the hundred positive reviews on Amazon and you’ll find yourself reading the same structured comment again and again with slightly different wording.

I had to look into this further.

Biogen Health Science claims to have a long history in scientific research within the area of ‘nutraceuticals’, which was a very broad term that go from nutrients and dietary supplements to cereals and soups… briefly, about 20 years ago.

They describe themselves  as “one of the world’s leading independent distributors of fat burning nutraceuticals”, which may in fact be true, considering no other supplement I’ve reviewed has ever dared mention the term ‘nutraceutical’.

Despite it’s claims, Biogen still remains a relatively unknown company, and it’s products appear to be the fat burning marmite of the market: some love it, while others expressively hate it.

Biogen state that a T5 serving should be taken once every 24 hours. Either an hour before breakfast or 15 minutes before a work out.

This seems poorly thought through, as the boost from the fat burner would lead to an inevitable crash before the end of the day. More respected fat burners, e.g. Instant Knockout ensure that the dosage throughout the day is consistent and takes every precaution to avoid an energy crash in the user.

These are the ingredients used in T5: 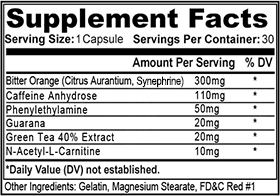 All suspicion aside, it’s rather refreshing to review a supplement will so fewer ingredients with clearly marked dosages.

Synephrine (Bitter Orange) 300mg – There’s an issue I face again and again with Bitter Orange. Some research claims it has stimulating properties, to which there has been a mass uptake of supplement companies including the ingredient in their various fat burners. None of the evidence to show that Bitter Orange promotes weight loss has been proven – but the side effects are very real.

Caffeine Anhydrous 110mg – Seemingly a staple-hold of any fat burner worth its salt. Caffeine Anhydrous has been known to increase metabolism, suppress appetite and of course, work as an effective stimulant during a workout. There’s a brief write up of the benefits in my fat burner guide to ingredients. The only problem I find here is the interference it may have with Bitter Orange.

Phenylethylamine 50mg – An organic compound used for cognitive enhancement, dealing primarily with focus and mood enhancement. It naturally occurs in the body and is relatively safe, although overuse can lead to to it having less of an effect with headaches, nausea, heartburn and constipation.

Guarana 20mg – A highly caffeinated plant that also contains theophylline and theobromine which offer similar effects to caffeine. Raises metabolism and heart rate, wise to be taken in smaller doses.

Green Tea Extract 20mg – A favorite here at SupplementTester, Green Tea is vital for improved weight loss, the catechins present in the plant promotes fat burning via the hormone norepinephrine and adds a more thermogenic process to the supplement.

N-Acetyl-L-Carnitine 10mg – A potent amino acid that aid in energy production. It is vital to heart, brain and muscle function along with various other goings on in the body. However, it has been known to upset the stomach and cause nausea.

Just browsing the ingredients, T5 looks like a pretty positive fat burner – a lot of natural extracts and definitely some supplements that are known for weight loss have entered the mix.

Unfortunately however, the ingredients that have been combined seem to lead to some pretty grim consequences.

The sheer abuse of caffeine dosages alone is enough to risk insomnia and jitters, however the main culprit is the Bitter Orange, the renown ‘bad boy’ of the fat burning world. Although there are claims that this ingredient delivers when it comes to weight loss, the problem is that none of these claims have been proven or verified. Combine that disappointing cake with some very potent and caffeine-heavy ingredients and we seem to be dealing with a rather peculiar blend of side-affect icing.

Yes, as previously discussed, Bitter Orange when combined with the right caffeine based substances can have some pretty nasty results such as:

Albeit, these occur in a few cases, it’s better not to take the risk by ingesting an unproven weight-loss aid that may, or may not help you at the risk of all of the above.

After looking at the evidence and the ingredients, I think what Biogen has here is a product with promise that needs a lot more work.

The caffeine seems to dominate the product, and combined with the Bitter Orange it seems to only lead to problems, however, the even bigger curiosity comes from the endless Amazon reviews that say the product has no effect on them at all.

If you’re considering buying from Biogen, I would suggest you save your money. I’ve compiled a list of what I believe are currently the best fat burners on the market, where you will find a much safer and effective choice.