Sometimes when looking for a fat burner, consumers look more for the results, rather than the risks.

Other times, all they need is a brand name.

Thermobol from MaxiNutrition/Maximuscle is a popular fat burner that has been praised for its natural components and nutritional transparency. Thankfully they do not list their ingredients under proprietary blends to hide component measurements, which is a good sign.

Thermobol’s effects on the body claims to give the user:

So far so good, however, after seeing venturing over to Amazon UK. Customer opinion on Thermobol was less than helpful:

I’ve took it upon myself to investigate.

In the UK, MaxiNutrition is a tough competitor to go toe-to-toe with. Holding a well-established reputation, initially mustered from success in the protein market, MaxiNutrition has gone on to branch out into various aspects of a healthy lifestyle.

MaxiNutrition products are available widely throughout the UK though are hard to come by in the States.

Thermobol is to be taken three times a day with a tablet before breakfast, lunch and one in mid-afternoon. And on the whole it appears a relatively stable product: 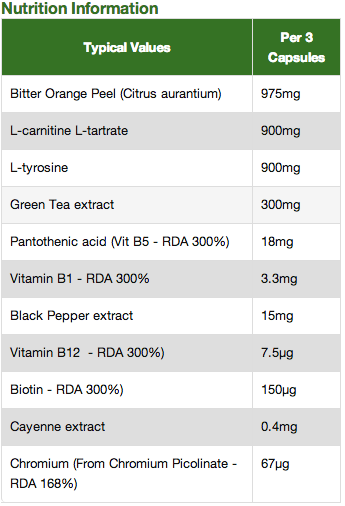 Bitter Orange Peel (Citrus Aurantium) – Also known as Synephrine is, unfortunately, an unproven weight loss component. It does not play well with caffeinated herbs like Green Tea and can increase risks of high blood pressure, heart attacks and other related ailments.

L-Carnitine L-Tartrate – This amino acid transfers long-chain fatty acids to oxidation for energy production. It has also been shown to reduce fatigue and suppress appetite.

L-Tyrosine – Another amino acid that increases energy, Tyrosine raises mental alertness and focus to keep you going for longer.

Green Tea Extract – A consistent favourite of the site. Green Tea is the key to any fat burner worth it’s salt. Although it runs a risk in this scenario as it is involved with Bitter Orange Peel, which together could lead to some unpleasant side effects.

Pantothenic Acid – The cunning pseudonym of Vitamin B5. Pantothenic Acid is a contributing force to the decomposition of fats, carbs and proteins in the body. It heavily promotes weight loss.

Vitamin B1 – Whereas B5 decomposes, B1 utilises, working with fats, carbs and proteins, B1 is able to release energy from these sources and also contributes towards keeping the heart in check.

Black Pepper Extract – A great addition to any fat burning supplement, black pepper is a great help when it comes to the absorption of nutrients.

Biotin – AKA Vitmain B7, Biotin is a necessity for cell growth, production of healthy fatty acids and the metabolism of fats and amino acids. It is a fantastic co-enzyme for breaking down food like carbohydrates and a great tool for losing weight.

Cayenne Extract – A good natural source for a thermogenic boost. As the body burns calories to cool down from the cayenne, it also the suppresses the user’s appetite. It’s a powerful weight loss aid.

Chromium – Found mostly in foods like broccoli and grape, chromium is a fantastic appetite suppressor for staving off carbohydrate-rich food.

With this product in particular there have been a lot of reviews and general feedback that Thermobol has made users nauseous. This partly due to the rich amount of caffeine in the product, which stimulating effects lead to these kind of side effects when dealing with a low tolerance user.

Unfortunately that is not the only problem with this product, as the Bitter Orange Peel can work in conjunction with the green tea for whole host of problems, increasing the risk of:

Thermobol is a natural product, that has produces a stimulating effect for the user. Unfortunately, although natural, the dosages and components choices haven’t been fully considered. A better example would be Instant Knockout, who use similar ingredients but in a much more balanced manner.

Certain ingredients in Thermobol have led users suffering from cases of nausea and headaches, chiefly due to their potency. I do not universally recommend it for a fat burner, as the tolerance to stomach it is unnecessary. Plenty of other alternatives accomplish the same job for less risk.