We’ve chosen to review a fat burner supplement that’s popular in Europe, to see how it can compete with our highest rated list. It looks promising from first glance, so let’s see whether the ingredients are shown to be safe and effective.

One thing we noticed while looking at the advertisements for this product, was that it doesn’t seem to have any effect on your appetite. We prefer fat burners to help surpress our appetite, so staying away from snacks and sugary treats is made easier during a cut.

Our initial impressions are mixed, as Extreme Burner contains some great nutrients. But its nutrient profile also includes ingredients shown to cause side effects.

We’ll explain everything during this review for you below.

There wasn’t much information available online about Thermodrone. But we found that they’re a UK-based supplements company that’s sell their products mainly through Amazon.

As there’s no other useful information, lets get straight into examining Extreme Burner’s ingredient list.

We’ve already mentioned that we have mixed opinions after looking at Extreme Burner’s nutrient profile; this is because it contains some of our favorite fat burning ingredients, such as green tea extract and cayenne pepper powder. But it also contains ingredients that have been reported as harmful, such as Citrus Aurantium.

We’ll expand on this in this section, and by the end, you’ll be able to see whether Extreme Burner is worth trying out. Just to ensure you know, it’s worth mentioning that the serving size for Extreme Burner is 2 capsules per day (which isn’t clearly indicated on the packaging). 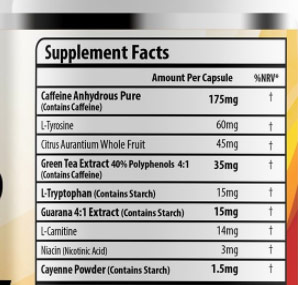 This is the most commonly consumed stimulant in the world. It’s found in products such as tea & coffee, and is known for it’s ability to keep you alert.

It’s a key addition in a fat burner supplement, as its able to keep your energy levels high – even while you change your diet in order to lose fat.

But one thing you have to watch out for is the dosage of caffeine you consume; the RDA (recommended daily allowance) for this stimulant is 400mg, so it’s recommended that you don’t surpass this limit.

What happens when you consume too much? Answer: you suffer side effects like jitters and energy crashes.

As a result, it’s a good idea to check the exact dosage of caffeine inside the supplements you’re interested in – to avoid side effects. Fortunately, Extreme Burner doesn’t contain an overload of caffeine, so you’ll be safe here.

L-tyrosine is known for being a cognitive enhancer, meaning it can improve your memory and focus. This is why it’s often added into nootropic supplements.

In fact, there’s no arguments about whether it works; numerous studies have proven that l-tyrosine is able to enhance your cognition.

But the only problem is that it’s not shown to promote fat loss. As a result, we would have liked Thermodrone to have replaced l-tyrosine with a fat burning nutrient such as green tea extract (especially as caffeine offers enough of an increase in focus for daily requirements).

This ingredient is also known as synephrine or bitter orange extract, and is well-known for the wrong reasons…

In a nutshell, while citrus aurantium has shown to promote fat loss, it’s also been reported to cause numerous side effects.

However, not many people know about each ingredient in supplements (unless you’re reading this review, of course). So many don’t actually know of the dangers this nutrient comes with.

It’s never worth putting yourself at harm in order to lose weight. It’s perfectly achievable through safe and effective ingredients that don’t cause any side effects.

L-Trytophan is known for being able to increase your serotonin levels (helping you feel happier and more relaxed). This amino acid is also believed to help improve your sleep, but it doesn’t have a direct effect on fat loss.

It can be a great bonus ingredient, but we don’t consider it to be completely necessary in fat burner supplements.

You might know guarana as being a stimulant and it’s even consumed as tea. However, it’s more difficult to determine the caffeine dosage in guarana than caffeine anhydrous; this means you’ll be more at risk at suffering from side effects like jitters.

In fact, guarana seed extract hasn’t actually been acknowledged as being ‘safe’ by the FDA. Instead, it’s allowed to be used as food additives for ‘flavor or non-flavor’ uses.

In a nutshell, there’s no need for a supplement to contain both caffeine anhydrous and guarana seed extract. And if was a choice between the 2, we’d choose caffeine anhydrous everytime, as it’s proven to be safe and effective when consumed in sensible dosages.

This compound is a great addition to a pre-workout supplement, due to being able to reduce fatigue while improving your focus in the gym.

But l-carnitine has only shown to slightly promote fat loss, so there’s better ingredients available to be added into fat burner supplements (such as green tea extract).

Niacin is an essential B-vitamin and has shown to improve HDL cholesterol and triglyeride levels. But the problem is, while it can improve your cardio health, studies have shown that it increases your insulin sensitivity (which is something you should avoid when trying to lose weight).

As a result, we believe that negatives outweigh the benefits of consuming niacin.

There’s a high chance that you’ve eaten cayenne pepper before. Well, like with any chilli pepper, you’ll know that cayenne can raise your body temperate and make you sweat.

Well, this is exactly how cayenne pepper raises your metabolism, ultimately helping you lose fat faster. Just in case you’re still unsure, studies have proven that this nutrient works, so you can’t argue with that.

In a nutshell, we believe that cayenne pepper powder is a key addition to any fat burner. 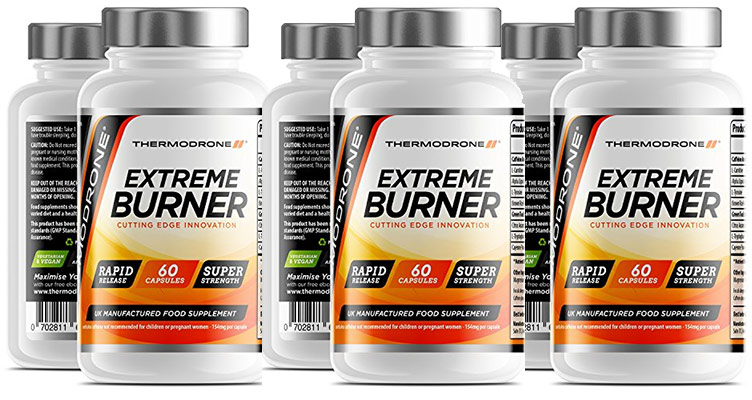 The biggest concern we have with Extreme Burner, is that it contains 2 sources of stimulants; caffeine anhydrous and guarana seed extract.

Consuming more than 1 stimulant in supplements always puts you at risk from jittery side effects. As a result, we always recommend that you choose a fat burner containing only caffeine anhydrous in dosages under 100mg caffeine per capsule serving.

Not only that, we mentioned before that niacin can increase your insulin sensitivity; this can make your fat burning journey more difficult, making it harder for you to achieve your ideal body.

See the possible side effects you might suffer with Extreme Burner:

In all fairness to this product, it’s priced quite low (under $20 per container). As a result, customers shouldn’t be expecting a premium product – remember that you get what you pay for.

For the price, Extreme Burner actually seems like a good option. However, as we’ve mentioned in the section above, you’ll be at risk from side effects such as jitters.

Personally, we’d rather save up extra cash and buy a more reliable, premium product that’s proven to work. However, we can see why those looking for a cheaper alternative will be interested in Extreme Burner by Thermodrone.