Transparent Labs’ original Physique Series Fat Burner contained some ingredients that let it down, so we’re hoping the Stim-Free version may fare a little better.

The Physique Series Fat Burner Stim-Free has several five-star reviews on the company’s own website. But as these could be handpicked to make the product look better than it is, we want to find out whether it really is worth paying for…

As part of its desire to change “our beloved supplement industry”, the company also claims to be above the “low-quality products and deceitful marketing” that it sees in the market today.

As you might expect from a company named Transparent Labs, this fat burner doesn’t use any proprietary blends.

Reminder: Proprietary blends are sub-formulas that don’t disclose the amount of each ingredient. We don’t like them because – for the good of your health and bank balance – you have a right to know exactly what you’re paying for.

However, this fat burner gives you just two doses per day – we prefer 3-4 daily doses for around-the-clock fat-burning that gives you faster results. 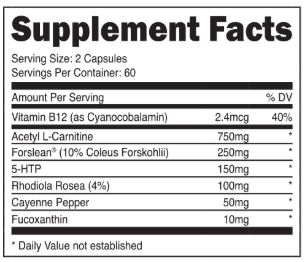 Vitamin B12 helps your body convert food into usable energy and aids digestion – and this ability to process more food helps your body burn more calories, which in turn helps you shed fat.

If you’re not getting enough of the essential nutrient, you may become weaker and tired.

And as lowering your calorie intake can make such issues worse, it’s important to get a healthy dose of B12 to help keep your strength up and ensure you stay focused on your weight-loss goals.

For the best results, the optimal dose is around 10mcg. With this in mind, the 2.4mcg in Transparent Labs Fat Burner Stim-Free may not be enough.

Acetyl L-Carnitine is an amino acid that fights fatigue and prevents muscle damage during exercise, which is why it’s a good ingredient to find in a pre-workout.

But why does Transparent Labs include it in this fat burner? Well, there is some evidence Acetyl L-Carnitine can help elderly people reduce fat, but it DOES NOT help young people or adults do the same.

Forslean is a branded version of Coleus Forskohlii. For hundreds of years, the herb has been used in Ayurvedic medicine to treat heart, lung conditions and cancer.

Its use as a fat burner stems from the fact that it’s rich in alkaloids that are said to increase levels of the cyclic adenosine monophosphate (cAMP).

As some studies link raised cAMP levels with fat loss, it stands to reason this herb can help you shed the flab.

But while early research is promising, there’s not yet enough proof Coleus Forskohlii aids fat loss.

5-HTP (5-Hydroxytryptophan) is a metabolite of L-tryptophan (an amino acid), and a precursor to serotonin.

Its links to this feel-good chemical mean 5-HTP regulates your mood and influences your sleep patterns. It may also have a positive effect on your heart and muscle functions.

Some research also suggests 5-HTP can reduce your appetite by a small amount to help you cut fat. However, 5-HTP has no effect on your metabolism and it won’t help you burn more calories.

In fact, a study published in the International Journal of Obesity and Related Metabolic Disorders suggests 5-HTP may actually INCREASE your calorie intake by a small amount. And as fat loss depends on lowering your calorie intake, it seems strange to use 5-HTP in this supp.

Along with L-Carnitine, Rhodiola Rosea is another ingredient we’re also pleased to see in a pre-workout, but not so much in a fat burner.

The herb’s ability to improve mood, motivation and focus helps put you in the zone in time for your workout.

But as research shows it has no direct influence on weight, we’re having trouble working out why Transparent Labs would include Rhodiola Rosea in this supp.

Also known as Bird Pepper, Red Pepper and Guinea Pepper, Cayenne Pepper is an awesome thermogenic – in fact, we reckon it’s one of the best around.

Cayenne Pepper’s power lies in its high capsaicin content, which lends the fruit both its spicy taste and its ability to raise your body heat. Raising your core temperature forces your body to burn more calories to cool itself down – and when you burn calories, you also burn fat.

But as we’ve found 100mg of Cayenne Pepper to be optimal, the 50mg in Physique Series Fat Burner Stim-Free falls short of the amount you need to get the best results.

Fucoxanthin is a pigment of certain types of brown seaweed. The molecule has a similar structure to Vitamin A and Beta-Carotene, but it does not induce the same effects as either nutrient.

It appears to reduce fat by inhibiting the proliferation and differentiation of fat cells. But the lone study on Fucoxanthin is not enough to prove its use as a fat burner. 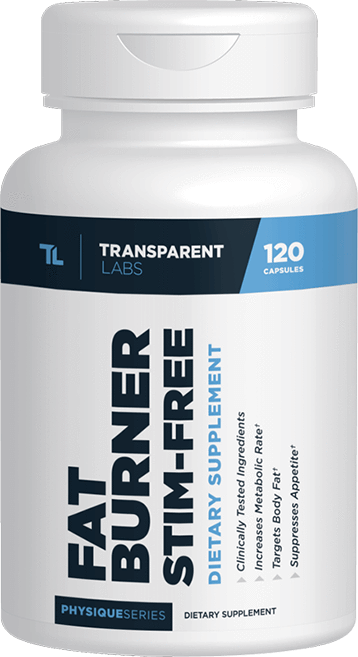 Transparent Labs Fat Burner Stim-Free is safe to use.

Out of the seven ingredients in this fat burner, we’re only pleased to see two. B12 boosts your energy and stops you feeling tired and withdrawn when you start cutting calories.

Meanwhile, Cayenne Pepper is a potent thermogenic that helps you burn fat (at the right dose, that is).

And while Acetyl L-Carnitine and Rhodiola are two of the best pre-workout ingredients, they don’t have much use in this fat burner.

Meanwhile, Forslean and Fucoxanthin are promising, yet still unproven for this purpose.

5-HTP could even increase your calorie intake, which is the opposite of what you want from a fat burner!

The good ingredients are underdosed and the supp uses too many unproven elements.

So take our advice and look for another honest fat burner with more proven power.