We’ve reviewed a couple of Vigor Labs products before, but none of them have impressed us yet. So we’re hoping that Gut Cut can deliver on its claims and actually work to cut your body fat levels.

One thing we noticed was that there’s no reference to appetite suppression in Gut Cut’s advertising. We believe that the best fat burners deliver this advantage – but in fairness to Vigor Labs, many other companies forget to provide this benefit with fat burners too.

As soon as you go on this company’s website, it looks very cheap – which isn’t a good message to send to potential customers.

Honestly, it’s a very dated website that hasn’t kept up with the recent progressions in technology (hopefully this fat burner won’t be similar to this).

Anyway, we couldn’t actually find much information about Vigor Labs; their ‘about us’ page only contained an email address, phone number and shipping information.

Usually, we like to see what date a company was founded etc. But as this isn’t provided, we’ll move onto examining the nutrient profile of Gut Cut.

Strap yourselves in for a long ride, because Gut Cut contains over 10 ingredients; this is an unnecessary number to have in a supplement.

From experience, we know that the best fat burners only contain between 7-9 nutrients. But we’ll wait until the end of this review to give our final thoughts on Gut Cut by Vigor Labs.

However, we will bring up 1 thing we don’t like now though – Gut Cut contains a massive proprietary blend, so you can’t see the dosages of each ingredient inside.

Not only that; Gut Cut contains caffeine anhydrous inside this blend, which increases your risk of suffering from side effects such as jitters and energy crashes.

We’ll expand on this further, when we tell you more about each nutrient inside this fat burner.

This is a good start by Vigor Labs, but remember that green tea extract is inside a proprietary blend – so you don’t know the amount inside Gut Cut.

But green tea extract is one of the best fat burning ingredients shown to work; it’s picked up positive attention, as it can help you lose fat by raising your metabolism.

When consumed in dosages of 500mg, it’s a key fat burning nutrient. But as we mentioned already, no-one knows whether it’s been dosed optimally here.

Why? Answer: because it can cause side effects like jitters or energy crashes when consumed in large dosages.

As a result, we advise you to stay away from supplements containing proprietary blends – especially when they contain stimulants.

Not only that; Hoodia Gordonii hasn’t actually shown to work in any study yet (meaning it’s unreliable).

But that’s not the worst part – this plant has shown to increase your blood pressure, which is quite worrying. As a result, we’ll be staying away from supplements containing this nutrient.

Ashwagandha is a popular herb that’s able to increase your strength in the gym. However, we’re not sure why Vigor Labs has included this in their fat burner – as it hasn’t shown to promote fat loss.

As a result, we consider this as an ineffective nutrient inside Gut Cut.

Popular for use in traditional Chinese medicine, magnolia is known for being able to raise your cognition. Again, this hasn’t shown to promote fat loss in studies, but it’s thought to be slightly cancer protective (although this isn’t completely proven either).

Ultimately, Magnolia isn’t really needed in a fat burner supplement. The worrying this is that magnolia might be taking up most of this blend – which would make most of Gut Cut useless.

You might not have heard about Chitosan before…because we hadn’t. But luckily for you, we’ve done our research.

In a nutshell, this is a fiber that’s believed to inhibit the digestion of fat after supplementation. But as you can imagine, this sounds too good to be true – and it is.

Basically, a study shows that chitosan was only as useful as a placebo (meaning it was useless). Again, the worrying thing is that this could be filling most of the proprietary blend without you knowing.

This is extracted from the leaves of the olive plants; it’s contains beneficial olive phenolics which can improve your cholesterol levels.

However, although it’s good for your general health – olive extract hasn’t shown to promote fat loss in any studies.

Yerba Mate is a caffeinated tea shown to boost your energy levels. However, adding stimulants to proprietary blends can be very dangerous (it can cause side effects like jitters and energy crashes – as you don’t know the exact dosage inside.

Now, this is an interesting nutrient; white kidney bean extract is thought to be able to ‘block’ carbohydrates from spiking your blood sugar levels.

Sound too good to be true? It’s because it is.

In a nutshell, white kidney bean extract hasn’t shown to actually work in any study conducted. As a result, it’s an unreliable nutrient that’s not likely to work.

This is a chemical derived from sesame seeds; it’s thought to increase the effects of Vitamin E supplements, but hasn’t shown to help you burn fat.

For this reason, we consider sesamin to be an ineffective nutrient in fat burner supplements.

Vanadium is a mineral that’s mainly found in your bone tissues. It’s been added into Vigor Lab’s Gut Cut as it’s thought to keep your blood sugar levels stable.

However, there hasn’t been enough studies to prove this that vanadium actually works – making it another unreliable ingredient in this fat burner. 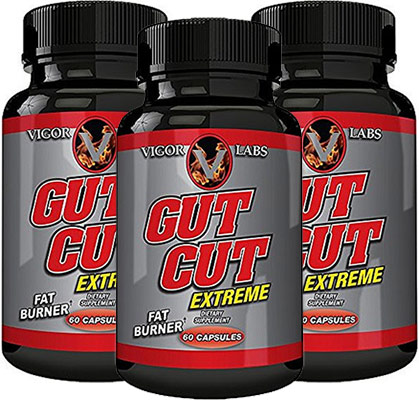 We mentioned during the ingredient analysis that Gut Cut can cause side effects – due to containing stimulants inside a proprietary blend.

As a result, we always recommend that you avoid supplements containing proprietary blends – especially when they contain blends with stimulants inside.

Anyway, see the side effects you’re at risk from:

We weren’t impressed with Vigor Lab’s test booster supplement. And to be honest, there’s not much to be impressed about here either.

In a nutshell, Gut Cut contains only 2 useful fat burning ingredients (green tea extract & caffeine) – and as they’re both in proprietary blends, you don’t even know whether they’ve been effectively dosed.

Not only that; as Gut Cut has 2 stimulants, you’re at risk from side effects too. As a result, we believe that there are many better options on the market available.