Metabolic Diet aren’t considered to be one of the ‘big boys’ in the supplements industry like Optimum Nutrition. However, they’ve made some highly priced products that have caught our attention, especially TestoBooster.

To be honest, the advertisement for this supplement wasn’t very clear. Instead of telling you the benefits of consuming this product in basic terms, they’ve tried to use highly scientific language, which the normal customer won’t really understand.

As a result, instead of explaining all of it to you, we’ll see which ingredients have been added inside TestoBooster for you.

We’re very confused about Metabolic Diet’s website as a company; it’s named after the creator, and seems more likely to boost his own ego rather than actually inform you about the company (this is simply our honest opinion).

Basically, we would have preferred the domain name of its website to include the company name. This would have taken away any confusions, instead of resulting in us having to look around the website to see if we were actually a supplement company site.

Anyway, it’s pretty clear that Metabolic Diet was founded by Dr. Mauro Di Pasquale, who is a licenced physician in Canada. But we’re more interested in finding out how effective TestoBooster is as a testosterone booster supplement – which is exactly what we’ll do in the next section.

It’s not very often in modern times that we’ll see a product that contains a big proprietary blend packed with unknown quantities of ingredients. However, that’s what we see on TestoBoost’s ingredients list.

Why is this a bad thing? Well, it’s better to know the exact dosages of ingredients when analyzing a supplement, as the effectiveness of nutrients can be determined by its dosage.

In case you don’t know what proprietary blends are, check TestoBoost’s ingredient list below and you’ll see hat the overall amount of the TestoBoost proprietary formula is 5,333mg, but you’re not shown the dosages of nutrients inside. 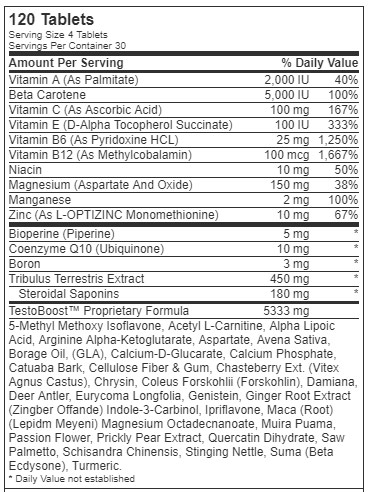 However, there’s a reason why you haven’t heard of it before; there haven’t been enough studies to prove that it’s reliable, so companies have neglected to add this in.

Here’s the bad news…methoxy isoflavone hasn’t shown to deliver any positive effects in the few studies we’ve seen (you can see one for yourself here: https://www.ncbi.nlm.nih.gov/pmc/articles/PMC2129166/).

As a result, we personally wouldn’t choose to supplemen with this nutrient. Especially as it’s not really shown to have any effect on your testosterone levels.

Now, we’re not sure why l-carnitine has been added to TestoBoost. It’s capable of reducing muscular fatigue and slightly promote fat loss, but it’s not known to be a test booster.

So while it is beneficial, it’s more useful in pre workouts or even fat burners. We would have chosen something more effective at raising your T levels here instead, such as vitamin d3.

More commonly known as ALA, this is another ingredient that can promote fat loss; it works by keeping your blood sugar levels stable, so your body is encouraged to use body fat as fuel instead of carbs or glucose.

But the bad news is that there haven’t been any reliable studies to suggest that ALA is able to boost your testosterone levels.

Known as AAKG, this is the salt from L-Arginine extracted and thought to raise your nitric oxide levels; in turn, this can lead to enhanced muscle pumps while you train.

However, AAKG hasn’t shown to be very reliable in studies either.

Not only that, even if we confirm that it worked, it’s not shown to have any effect on your testosterone levels. So again, we would have preferred Metabolic Diet to have added something able to boost your T, like vitamin d3 instead.

We’re not sure why Metabolic Diet has listed this ingredient as ‘Aspartate’ here. This is more commonly known as d-aspartic acid and is a key testosterone boosting ingredient.

In fact, we actually believe that d-aspartic acid is the best ingredient in the whole of TestBoost. So we would have preferred to see an optimal dosage of this here.

As we mentioned at the start of this review, as every ingredient is inside a proprietary blend, you’re not shown the dosages of nutrients inside. This is a problem as no-one can be sure whether Metabolic Diet has dosed d-aspartic acid for it to actually work.

You’ll probably laugh to yourself once you know what this is. Avena sativa is a ‘fancy’ title for oats – the same stuff you eat as porridge.

Right, so it’s quite an ordinary ingredient compared to d-aspartic acid. However, we do agree that oats can improve your general health due to containing high amounts of beta-glucan.

But the bad news is that oats aren’t able to boost your T levels.

This is exactly what it sounds like – powdered deer antlers.

It’s been used in traditional Chinese medicine for a while, but modern studies suggest that it doesn’t have any effect on your testosterone levels.

This is basically in the same category as eating an animal’s heart and gaining strength; it might have mental benefits in terms of confidence, but it’s not going to raise your testosterone.

Otherwise known as Tongkat Ali, this has been believed to be able to raise your testosterone levels in the past, but it hasn’t quite proven itself useful in this regard.

But that doesn’t mean it’s useless; eurycoma longifolia is known for being able to increase your sexual function and strengthen your erections.

As a result, while it doesn’t boost your T, it’s still able to deliver useful benefits.

Not much is known about Coleus Forskohlii, and it’s only been added to supplements in the modern era. This also means there hasn’t been many studies showing whether it’s actually safe or effective.

It’s thought to be able to both raise your T levels and promote fat loss at the same time, so if it is proven to work, then it’ll be potentially one of the best ingredients on the market.

As a result, it is worth companies adding this nutrient into their supplements on the off-chance that it does work. But personally, we prefer proven ingredients such as vitamin d3 instead.

You’ve most probably consumed this in your lifetime already, so there’s no need for us to describe what it is.

Basically, it’s known for being able to improve your digestion and support your immune system (people even use ginger to fight the common cold).

However, it’s not shown to reliably boost your testosterone levels in studies. So it’s not the best ingredient for this job, but it undeniably improves your general health – making it useful extra in TestoBoost.

Simiarly to eurycoma longifolia, maca is able to raise your libido, but doesn’t have any effect on your testosterone levels. Still,

You might have been stung by touching this plant before, so you might not have thought about consuming it. But don’t worry, it’s not able to sting you in this form.

Basically, studies suggest that stinging nettle root extract is able to raise your testosterone levels by reducing your SHBG levels. Not only that, this ingredient is thought to support prostate health, which is extremely important in men.

As a result, we consider stinging nettle root extract to be the 2nd best addition to TestoBoost after d-aspartic acid. 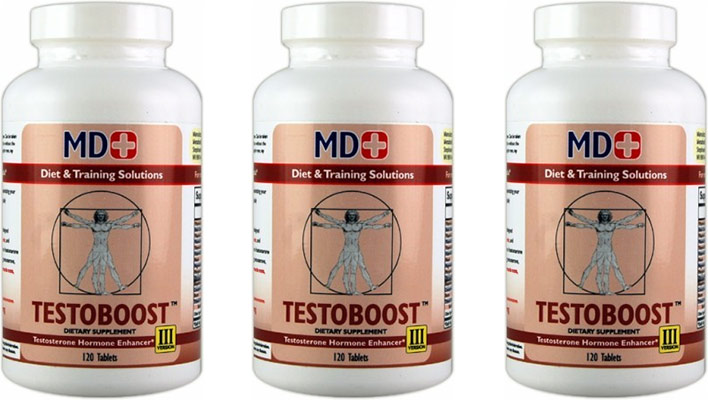 While TestoBoost doesn’t seem like the best supplement when it comes to raising your testosterone levels. None of the ingredients inside are likely to cause side effects.

As a result, TestoBoost seems to be free from side effects.

We weren’t very impressed with Metabolic Diet’s website, as you can’t actually see it’s a company website when searching for it on google (the domain name is the founder’s name, Mauro).

However, there are some positives about TestoBoost; it contains some great ingredients such as d-aspartic acid and stinging nettle root extract, and other nutrients capable of increasing your libido.

But ultimately, TestoBoost is let down by the fact that it’s missing key T boosting ingredients – especially vitamin d3.