NervaCORE is a nootropic created by CEL Nutrition. It’s one of the highest rated products of its kind and aims to help you perform at the highest level every day.

We’ve analyzed the product and the company behind it, to help you decide whether it’s a supplement worth purchasing.

CEL Nutrition was founded in 2015 with the aim of delivering natural products to help you perform at your optimum on a daily basis. They also pride themselves on their customer service and seem to have done well with their first product, NervaCORE.

When looking through the ingredients in NervaCORE, straight away we see a negative – a proprietary blend. You might be wondering, why is this bad?

This is why – a proprietary blend is a mixture of various ingredients that are all placed under one dosage, so you’ll never know the quantity of each individual nutrient in the blend (which is bad if you’re sensitive to any ingredients inside).

But among the negative, there are some positives. NervaCORE has included some great nutrients such as L-Tyrosine and Vinpocetine, which both promote brain function. We’ll explain why some ingredients are bad and what makes others good below. 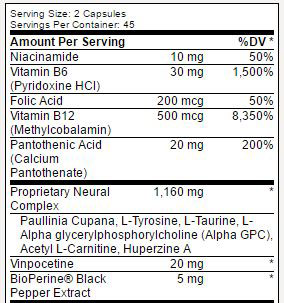 Niacinamide – This is a form of Niacin (Vitamin B3) and is used to treat patients suffering from niacin deficiency. CEL Nutrition have added this into NervaCORE as some people suffering from memory loss have been known to take it, believing that it plays a role in improving brain function.

However, no studies have confirmed whether Niacinamide actually helps improve memory.

Vitamin B6 – This is commonly used in countless products, ranging from multivitamins to pre-workouts supplements. But it could play an important role in boosting mental function (memory and reaction time).

If you’re deficient in Vitamin B6, your neurotransmitters could be depleted to the point of cognitive concern, meaning your brain won’t be functioning at optimum levels. Therefore, supplementing with Vitamin B6 could improve your brain function.

Folic Acid – This is a water soluble B Vitamin that’s used to treat memory loss among other things. However, it’s possible unsafe when taken for long periods of time – this is a problem, as CEL Nutrition give you 45 days worth of NervaCORE, and you’re likely to experience the height of its benefits after taking it for at least 3 weeks.

This means you might experience side effects like abdominal cramps, nausea, confusion, insomnia and irritability, which will definitely put you off from your goals. The risks outweigh the benefits for Folic Acid, and CEL Nutrition should have simply kept this out of NervaCORE.

Vitamin B12 – This is a great product to have in most products, but specifically in a nootropic, as it’s shown to help brain function. It’s an essential nutrient for the brain and can help prevent age-related cognitive decline.

There are no negatives to including this in a nootropic, so CEL Nutrition have done well by adding Vitamin B12.

Pantothenic Acid – Also know as Vitamin B5, it’s found in such foods as meat, vegetables, cereal grains, legumes, eggs, and milk. It’s commonly used to treat conditions like asthma, hair loss, allergies, stress, and anxiety – but nothing that massively contributes in making a quality nootropic supplement.

Now we’ll look at the proprietary blend that’s in NervaCORE. A proprietary blend is a mixture of numerous ingredients that are given to the consumer under one dosage, but the problem is that you’ll never know the exact amount of each individual nutrient in the blend.

Because of its high caffeine content, it will help give you a boost, which could help in a nootropic – but you don’t know the quantity of Paullinia Cupana inside this blend, so you’re putting yourself at risk from suffering from such side effects as jitters and insomnia.

However, the problem with NervaCORE is that L-Tyrosine is part of the ‘Neutral Complex’ proprietary blend, so you don’t know whether most of this blend is filled with less beneficial ingredients.

However, there aren’t any benefits that relate to uses in a nootropic – this is concerning as it’s part of a proprietary blend and could be taking up space that the L-Tyrosine could have used to benefit you more.

However, the optimal dose of Alpha-GPC is 300-600mg – the whole ‘Neural Complex’ proprietary blend is only 1,160mg, so for it to be effective, this ingredient would have to take up almost half of the blend. The problem is that you’ll never know the quantity of Alpha-GPC in NervaCORE.

But as it’s part of the proprietary blend, there could be a minimal amount of this ingredient in this product, meaning you wouldn’t experience the benefits of it.

However, it comes with risks of side effects, which include nausea, diarrhea, vomiting, sweating, blurred vision, high blood pressure and slowed heart rate. This is worrying, as it’s part of the ‘Neural Complex’ proprietary blend, meaning you don’t know the exact amount that’s in NervaCORE.

However, the 20mg is a high dose – you only need around 5mg per serving to benefit from this ingredient. We recommend that you look out for Vinpocetine on your search for a quality nootropic. 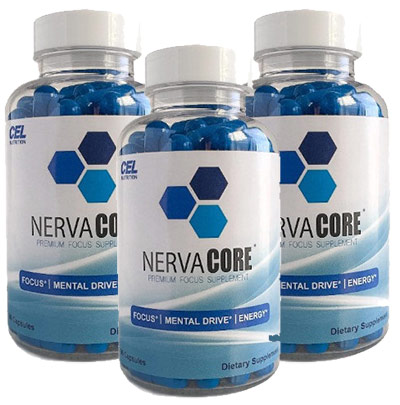 NervaCORE has a few great ingredients, but most of them are hidden in a proprietary blend – you’ll never know the exact quantity of these beneficial nutrients, and you might find that less effective ingredients are taking up most of the space.

The Ingredients in NervaCORE are mostly safe from side effects, but there are two that could cause some problems.

Paullinia Cupana has a high caffeine content and it’s mixed in with caffeine in CEL nutrition’s proprietary blend, meaning you might be taking too much and risking suffering from such side effects as jitters and insomnia – as it’s in the blend, you’ll never know the exact measurements inside.

Huperzine A also comes with some potentially severe side effects , like nausea, diarrhoea, vomiting, sweating, blurred vision, high blood pressure and slowed heart rate. This is part of the proprietary blend as well, so there could be a high quantity of this ingredient inside, meaning you’d be more at risk of experiencing these side effects.

Here’s a list of the possible side effects from taking NervaCORE:

Not what you’re looking for? See your best options in our
– Top 3 Nootropics Page –

It wouldn’t be fair to say that NervaCORE is a completely bad product. It has a few quality ingredients inside (especially L-Tyrosine and Vinpocetine) – but it’s frustrating that CEL Nutrition decided to hide them in a proprietary blend.

If CEL Nutrition had provided exact quantities of each individual product, then NervaCORE would’ve definitely scored higher here due to reducing the risk of its side effects.

We recommend that you look for a nootropic that doesn’t have any proprietary blends, so you know exactly what you’re getting without the risk of side effects – although rare, it’s possible to find a nootropic with very minimal side effects (check our other reviews), so you get more benefits with less negatives.