Neuro-Peak made by Zhou Nutrition is a best-selling nootropic aimed at those who want increased mental activity.

We looked at the company behind the product and it’s ingredients to see whether it would benefit you and improve your mental capacities.

Zhou Nutrition is a Kansas-based supplements and nutrition company who set out to provide affordable, quality products. From what we can see, they believe in using ancient, traditional herbal medicine in their goods to deliver you the best experience.

This is clear to see in Neuro-Peak – the main ingredient in this product is St. John’s Wort, a controversial herb that’s been used for centuries.

It’s refreshing to see a product that is transparent about their dosages – you can see that there are many products that have ingredient lists made up of proprietary blends. This keeps you from finding out the dosages of each individual component in the product.

However, immediately you see some discerning ingredients on the list. It might be low-cost, but it definitely shows – it can’t keep up with the more expensive, quality nootropics. 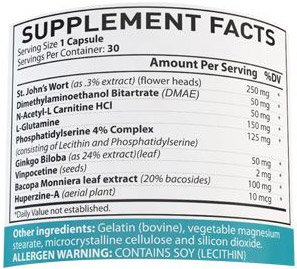 St John’s Wort is a herbal medicine that claims to treat symptoms of mental heath issues. However, after being confronted by this very controversial herb on the ingredients list, you should be a little worried.

It can cause strong side effects, most commonly depression, anxiety, loss of appetite and trouble sleeping – just to name a few.

If you’re reading this in France, you won’t be able to get hold of it anyway – it’s banned. However, if you’re elsewhere, it’s definitely wise to find another product without St. John’s Wort included.

This is another nutrient in the product that you should be concerned about. We can understand why companies use it in these types of products, as it’s suggested that DMAE helps elevate mood, improve memory and heighten intelligence.

However, you can decide whether it’s worth the risk – it’s potentially teratogenic, which means that it could cause birth defects in unborn infants. You can read more about that in a later section.

There haven’t been any solid human studies conducted yet, so there could even be more side effects to add to the already worrying list.

Again, you should look for alternative products without this nutrient included.

This ingredient hasn’t been proven to do a lot. It’s suggested that it helps with dementia, but it’s not been backed up by any research.

Also, for this compound to have any effect, you need to take a serving of at least 500mg (upwards to around 2000mg is optimal). This is where you see a problem, as Neuro-Peak only gives you a tiny 50mg dose – you can see where they’ve cut the costs here.

The space it takes up could have been used for more beneficial ingredients like Yamabushitake (AKA. Lion’s Mane Mushroom) which is proven to inhibit anxiety and improve cognition.

This is a quality nutrient, but there’s no reason for it to be in a nootropic. It’s naturally produced in the muscles and helps to maintain muscle when trying to lose fat, but hasn’t been shown to improve mental function.

Phosphatidylserine is an amino-acid derivative compound, similar to a dietary fat, which is vital for cognitive function. This is easily the best ingredient in this product by far.

If you’re looking for an effective nootropic, then this is a key nutrient that you should be looking for on ingredient lists.

At first glance, this nutrient seems to be great for boosting your mental capabilities. However, studies have shown that it’s not actually been any more effective than a placebo.

It’s definitely not as effective as Phosphatidylserine, but has more reason to be included than L-Glutamine.

This ingredient has been proven to improve your memory and reaction time.

It’s definitely worth including in a nootropic, but you need a large dose of Vincopocetine for it to actually benefit you (at least 6mg per serving).

Neuro-Peak only provides you with 2mg per serving, leaving you short by 2mg after your second, and last dose.

Now this is a ingredient that deserves it’s place on the list. Also known as water hyssop, this herb has been proven to boost your memory and cognition, as well as reduce anxiety.

It does this by working with your dopamine and sertonergic systems and increasing the growth of nerve endings (also called Dentrites), giving you the benefit of improved mental function.

You should be on the lookout for this ingredient when deciding on a nootropic product.

This is another ingredient in the product that hasn’t been proven to improve your mental capabilities. There have been few studies on rats, but no toxicity data on humans exist.

This means that you’d be running a risk and being the guinea pig when using this compound – there are many other ingredients that would benefit you in a nootropic, such as Rhodiola Rosea which has been proven to improve cognitive function and reduce fatigue. 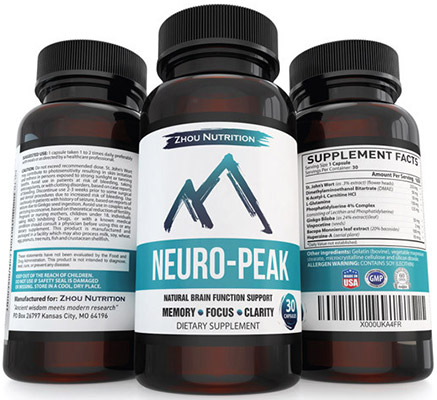 There are a number of issues with this product. You should look at a nootropic with minimal side effects to help boost your memory and focus.

The biggest concerns you should have when looking at this product is the inclusions of the nutrients, St. John’s Wort and DMAE which come packed with a series of potential side effects – most notably depression, anxiety and birth defects in unborn babies.

Here’s a list of the possible side effects for you to look at:

Not what you’re looking for? See your best options in our
– Top 3 Nootropics Page –

Although Neuro-Peak is a low-cost option if you’re looking for a nootropic, it doesn’t necessarily mean it’s a good one.

It contains only two great ingredients, Phosphatidylserine and Bacopa Monnieri that actually delivers on the product’s claims of boosting memory, focus, clarity.

Vinpocetine is a great nutrient, but it’s not provided in a big enough serving to actually have any effect on you. Unfortunately, it’s mostly filled with less beneficial ingredients – one of which mostly has a placebo effect (Gingko Biloba Extract).

We appreciate that it’s ingredients aren’t hidden away in a proprietary blend, but you should definitely look into a nootropic far less side effects that benefits you a lot more.