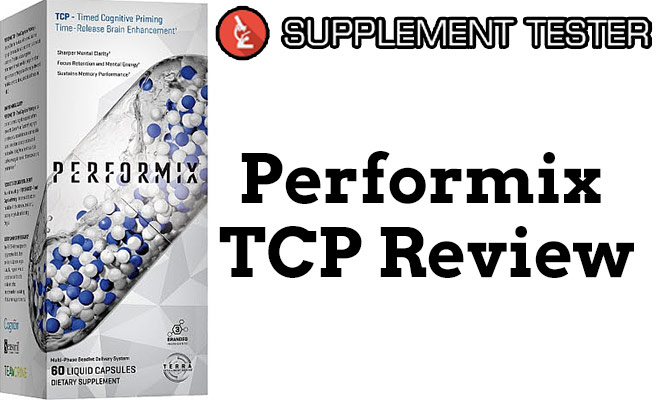 This is Performix’s Nootropic supplement. TCP stands for ‘Timed Cognitive Priming’ and is supposed to ‘time-release’ nutrients into your body over the course of your day.

However, the first negative is that we prefer consuming 3-4 capsules spread throughout the day, which ensures that nutrients are being delivered at certain times – instead of relying on ‘time-release’ liquid technology (that’s not been proven to work).

Let’s see whether the ingredients can back up Performix’s claims.

Performix are considered to be a premium supplements company that heavily market their TERRA Beads Time Release technology (which is supposed to release nutrients slowly into your body throughout your day).

However, there must be a reason why other companies haven’t attempted to jump on this ‘bandwagon’ – maybe because it’s not as effective as Performix say it is. Think about it, when the iPhone hit the market, every company rushed to create touchscreen smartphones.

Immediately after looking at Performix TCP’s ingredient list, we see a problem – all of it’s ingredients are part of 2 proprietary blends, and as usual, they have fancy names to make them seem better than they are.

These are basically a bunch of ingredients that are mixed together in a mysterious ‘formula’ that’s given fancy names (companies try to fool you into thinking they’re better than they actually are).

This is shown on the ingredient list of Performix TCP (which we’ll post a picture of underneath), as the lends are titled ‘Performix TERRA Pod Time-Release Cognitive Matrix’ and ‘Brain Focus Matrix’. 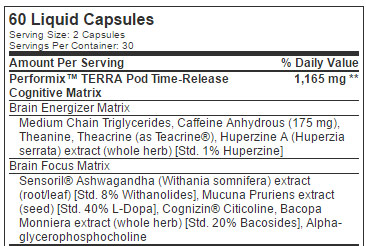 This is the proprietary blend in Performix TCP – the overall dosage of this blend is 1,165mg, but you’ll never find out the amount of the individual ingredients inside (except for the Caffeine dosage which they’ve provided).

Anyway, we’ll take you through the individual ingredients inside anyway:

This is composed of three fatty acids and are seen in Coconut Oil and Palm Kernal Oil. It’s believed to have a positive effect on your cognition, and there’s been a few studies that’ve backed this up.

However, as this is part of a proprietary blend, no-one knows how much is inside – there might only be a minimal amount in Performix TCP, making it ineffective.

This can be a great ingredient to boost your energy levels and improve your focus.

We enjoy Caffeine in pre-workouts and fat burner supplements, but it’s not really needed in a Nootropic – there are many other ingredients that specifically boost your focus, such as L-Tyrosine which is perfectly suited to a Nootropic.

Theanine is a relaxing agent and is great when paired with Caffeine – these two nutrients form a ‘smart-caffeine’ which is able to enhance the benefits of Caffeine, while keeping you away from jitters.

However, Theanine works in a Nootropic just as well on it’s own – keeping you calm and focused on your studies or work.

This is a stimulant that delivers similar benefits to Caffeine, but it’s supposed to be better.

Basically, early studies suggest that humans don’t build a tolerance to Theacrine, which would make it more effective than Caffeine in long-term usage (but this means that there’s an overload of stimulants in Performix TCP as it contains both Caffeine and Theacrine).

Huperzine A is extracted from a Chinese Club Moss plant, which is a herb of the huperziceae family.

Ultimately, as Huperzine A is part of a proprietary blend, you don’t know the exact dosage of it inside Performix TCP. So it’s important to check for safe dosages of this ingredient (200mg or under) before consuming it.

This is a great ingredient in a pre-workout or testosterone booster, as it’s shown to improve your strength, keep anxiety away, and even has anti-cancer properties.

However, there’s not shown to have any effect on your cognition (as this is marketed as a Nootropic supplement, this isn’t a good ingredient in Performix TCP).

Again, this is another ingredient that’s great in a testosterone booster – it’s proven to raise both T and HGH levels in numerous studies. But this hasn’t shown to improve your cognition much either.

Also known as CDP-Choline, finally this is a great ingredient to have in a Nootropic. It converts into uridine in your body, which is able to improve your cognition.

However, you need at least 250mg for it to work; as Citicoline’s inside a proprietary blend, no-one knows whether its contained in an optimal dosage in Performix TCP.

Another great ingredient in a Nootropic, Bacopa Monniera has shown to reduce anxiety and improve your cognition – perfect benefits for a Nootropic.

However, this is also part of a proprietary blend; meaning no-one knows whether it’s in an effective dosage here, so it might not work.

Not only that, Alpha-GPC has proven to cause numerous side effects in supplements – and this is why we try to avoid this ingredient in supplements. 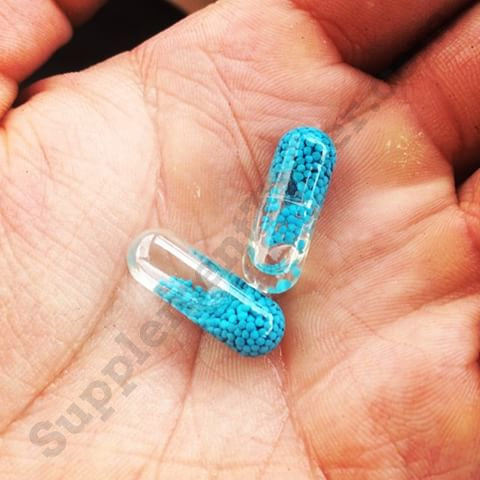 Not what you’re looking for? See Our
– Top 3 Nootropic Supplements of the Year –

Unfortunately, Performix TCP contains 2 ingredients that’ve consistently been reported to cause side effects – Huperzine A and Alpha-GPC.

As a general rule here at SupplementTester, we try to avoid any supplements that could cause you unnecessary side effects – no-one wants to have a bad time when they’ve spent money on these products.

Anyway, here’s what you could suffer from with Performix TCP:

Check out Nootropics that
– DON’T Cause Side Effects Here –

It’s a shame that Performix have hidden all of the ingredients in TCP inside proprietary blends – it actually contains some good ingredients, but we can’t see whether it’s contained in optimal dosages (so we can’t say for sure whether they work).

We prefer supplements that are transparent and give you all the info you need; this shows that a company is confident and proud of their product.

As a result, we can’t recommend this Nootropic, as it’s not the best we’ve seen on the market.