.50 Caliber is a pre-workout supplement marketed by Grenade. It comes in 30 serving containers, in 3 flavors – Orange Pineapple, Wild Punch, and Fireball.

Grenade are better known for their fat burner supplements, so we’ll see whether they’ve added an effective pre-workout supplement to their range. 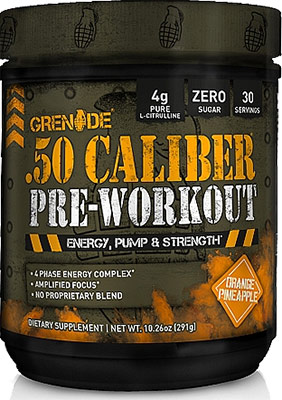 Founded in 2010, Grenade is a supplements company that markets, most notably, fat burners and pre-workout products.

They’ve won numerous awards, such as European Diet & Weight Management Product of the Year 2013, 2014 and 2015 – so lets see whether .50 Caliber can live up to their reputation.

One great thing about this pre-workout is that it doesn’t contain any proprietary blends, so you know the exact doses of each ingredient inside.

However, there’s a few concerning ingredients, such as Synephrine and Beta-Alanine. We’ll explain exactly why below, and analyze each ingredient contained.

L-Citrulline is a key ingredient in any pre-workout. It turns into L-Arginine in your kidneys, which boosts your nitric oxide levels, leading to increased blood flow and results in intense muscle pumps.

Grenade have added this ingredient in their pre-workout, as it’s shown to improve muscular endurance.

However, it can cause paresthesia, which is a tingling on the skin of your face, chest, hands, and extremities in doses over 0.8-1g – it’s not life threatening, but it’s uncomfortable enough to ruin your workout.

As .50 Caliber contains 2g of Beta-Alanine, you’re almost certain to suffer from paresthesia. We recommend staying away from this ingredient to avoid this side effect.

This is simply Creatine Hydrochloride mixed with Hydrochloride Acid, which turns into the basic creatine form in your stomach. It’s used instead of the more common Creatine Monohydrate sometimes, as it’s believed to be more effective in lower doses.

However, the benefits of Creatine Hydrchloride haven’t been studied, so it’s not as reliable as Creatine Monohydrate – it might be as effective either.

Another key ingredient in a pre-workout, Caffeine is one of the safest and most effective nutrients out there. It’s shown to boost strength and endurance, as well as cognition.

However, the only thing you need to watch out for is the amount of Caffeine in supplements – the RDA is 400mg, so avoid taking over 300mg in one dose before assessing your tolerance first.

.50 Caliber contains 300mg of Caffeine, so those sensitive to this ingredient might experience side effects like jitters and energy crashes. We recommend looking for a pre-workout that has 150-200mg servings of Caffeine to avoid any side effects.

This molecule’s been used in supplements since Ephidrine was banned, as it provides similar benefits (boosting fat loss).

However, it comes with equally dangerous side effects like high blood pressure and irregular heartbeat. As this ingredient isn’t even suited to a pre-workout supplement, we strongly recommend that you stay away from Synephrine.

If that’s not enough to put you off, it’s been banned in the UK for causing harmful side effects – so if you’re reading in the UK, you won’t get hold of this product anyway.

This is simply a mixture of caffeine and malic acid, but there’s been no studies conducted to prove it’s more beneficial than normal Caffeine – this is worrying, as it also means that DiCaffeine Malate’s safety is also in question.

We recommend staying away from this ingredient until studies have proven it’s effective and safe.

This is marketed as 90.5% pure Caffeine, and claimed to be more natural than normal Caffeine.

However, there’s been no studies conducted to prove that it’s more beneficial than normal Caffeine, so could also come with unknown side effects.

What’s most concerning about this ingredient, is that it adds to an already high level of Caffeine (400mg in total) – as the RDA is set at 400mg, this is a huge dose of caffeine for one serving, and is likely to cause side effects like jitters and energy crashes.

A relaxing agent, L-Theanine is one of the key pre workout ingredients. Why? Because it enhances the benefits of Caffeine, without further risks of side effects like jitters or energy crashes.

However, as the Caffeine content is very high in .50 Caliber, L-Theanine isn’t likely to provide many benefits or inhibit the side effects from the highly dosed Caffeine.

Higenamine’s a fat burning ingredient that’s extracted from a variety of fruits and plants. It’s also believed to have anti-asthmatic properties, but offers no benefits that specifically boosts your gym session.

For this reason, Higenamine isn’t needed in this pre workout supplement – there are already top quality fat burner products on the market, so Grenade should’ve kept this product as a specialized pre workout.

This is a herb that’s believed to boost cognition. However, there hasn’t been a lot of human studies conducted on Huperzine A, meaning it’s not proven to be effective.

Huperzine A’s purely thought to enhance mental function, so it’s not vital in a pre workout supplement – when Caffeine is dosed correctly, it boosts focus enough to benefit your workout.

Not only that, it’s shown to cause numerous side effects, such as nausea, diarrhea, sweating, restlessness, high blood pressure, and cramping. 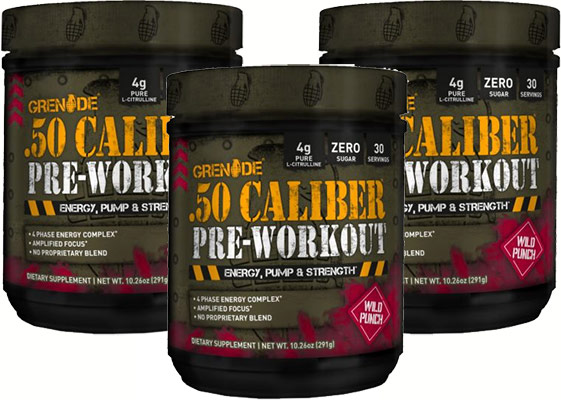 Caffeine’s been seriously over-dosed here (400mg in total), and Beta-Alanine is likely to cause side effects. Grenade have gone over the top, trying to deliver intense benefits.

We have concerns about the safety of this pre workout supplement. With 400mg of Caffeine contained, it’s more than likely to cause jitters and energy crashes (RDA is 400mg, so for one serving, it’s very high).

Beta Alanine causes a side effect, but the biggest worry is the Synephrine – also known as Bitter Orange Peel, it’s been banned in the UK after causing harmful side effects.

Grenade are known for their hard-hitting supplements, but they’ve gone too far with this pre workout. It contains a very high dose of Caffeine which can cause side effects – this is frustrating, because when Caffeine’s dosed correctly, it’s a key pre workout ingredient.

Unfortunately for those reading in the UK, you won’t be able to take this product – it contains Synephrine, which is banned in the UK due to causing harmful side effects. Even if you’re in the US or anywhere Synephrine’s available, we recommend that you avoid this ingredient.

There are more negatives than positives about .50 Caliber. We recommend that you look for a pre workout supplement that’s free from side effects, and delivers key benefits, like enhanced strength, endurance, and cognition (alertness, focus, reaction time) – a few key ingredients that are missing from this supplement, are Creatine Monohydrate, Beetroot Extract, and Rhodiola Rosea.