Animal Fury is a pre-workout supplement marketed by Universal Nutrition. It comes in two flavors – Green Apple and Watermelon.

It’s “designed to maximise energy, focus and performance” – so we’ve analyzed Animal Fury to see whether it delivers on these claims. 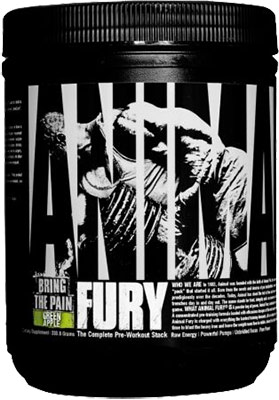 Founded in 1977, Universal Nutrition are one of the older supplement companies on the market.

They market alot of “extreme” products, that are aimed to be the strongest available – this is why they often come named as “Animal Pak” or “Animal Fury” like this pre-workout.

Animal Fury has a very small nutrient profile, so it’s important that every ingredient offers benefits to improve your training session.

A positive from looking at the ingredient list is that you can see the amount of every ingredient inside – so you know exactly what you’re getting. We’ll take a closer look and analyze the overall effectiveness of the product. 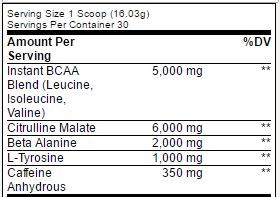 BCAA’s are made up of three amino acids, and can be foods such as meats and eggs – for this reason, it’s not necessary to supplement BCAAs, but they can provide benefits such as increased endurance and decrease in fatigue.

If you want to supplement with BCAAs, it’s quite cheap to purchase seperately, instead of taking a product containing it – this way, you can take BCAAs whenever you want, instead of being limited to taking it in a pre-workout.

This is the best ingredient in Animal Fury, and is a mixture of L-Citrulline and Malic Acid.

It turns into L-Arginine in your kidneys, where it boosts your nitric oxide levels, causing your blood vessels to dilate (vasodilation). Ultimately, this results in increased blood flow and intense muscle pumps when you lift weights.

You should definitely look out for pre-workout supplements that contain an optimal amount of Citrulline Malate to experience great muscle pumps in the gym.

Universal Nutrition should’ve left this ingredient out of their pre-workout. Although Beta-Alanine has shown to improve muscular endurance, it comes with the risk of paresthesia in doses bigger than 0.8g-1g.

Paresthesia is a tingling on the skin of your face, chest, hands, and extremities – it’s not life threatening, but it’s uncomfortable enough to ruin your workout.

As Animal Fury contains 2,000mg (2g) of Beta-Alanine, you’re almost certain to experience this side effect. We recommend that you stay away from Beta-Alanine to avoid the risk of experiencing paresthesia.

This is an amino acid that reduces stress levels and improved mental function (memory and reaction time) as it’s used to produce nor-adrenaline and dopamine.

L-Tyrosine’s optimal dose is between 500mg-2,000mg, so Universal Nutrition has dosed this ingredient well.

However, L-Tyrosine is better suited in a Nootropic supplement – caffeine is enough to enhance your mental function for a pre-workout and it’s already contained in Animal Fury.

As Animal Fury has such a small nutrient profile, Universal Nutrition should’ve replaced L-Tyrosine with something more beneficial in a pre-workout – such as L-Theanine, which works in synergy with caffeine to form a ‘smart caffeine, giving you enhanced benefits of caffeine without the risk of side effects like jitters or energy crashes.

This is one of the best ingredients in a pre-workout. It’s also one of the safest nutrients out there, used in countless products ranging from coffee to chocolate.

The only concern is when caffeine is dosed too high in supplements. The recommended daily allowance (RDA) is 400mg – Animal Fury contains 350mg in one serving, which is a large dose. This means you could experience side effects like jitters, energy crashes, and insomnia.

We recommend that you look for a pre-workout that contains a caffeine dose of 150-200mg – to experience all the benefits of caffeine, without the unwanted side effects. 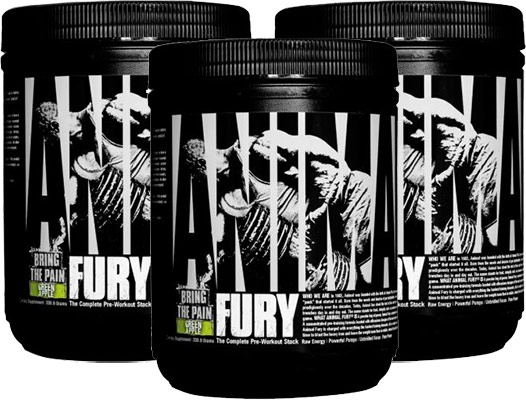 Animal Fury contains L-Citrulline in its optimal dose. But the inclusion of Beta-Alanine and leaving other key ingredients out has let this product down.

Animal Fury has a small nutrient profile, and there’s only one ingredient that can cause side effects, This is Beta-Alanine, which can cause paresthesia (a tingling on the skin of your face, chest, hands, and other extremitites).

However, as the caffeine dose is high (350mg), it may end up causing you side effects like jitters, energy crashes, and insomnia.

Here’s the potential side effects from taking Animal Fury:

A few positives of Animal Fury is that L-Citrulline is dosed perfectly, and all the ingredients’ doses are clearly shown on its ingredient list.

However, the caffeine is dosed too high, which can cause side effects like jitters and energy crashes (especially to those who are caffeine sensitive). Also, the Beta-Alanine contained can cause paresthesia, which can ruin your workout.

We recommend looking for a pre-workout that contains 150mg-200mg of caffeine per serving to avoid unwanted side effects. You should also look for ingredients such as Beetroot Extract (promotes muscle pumps) and Creatine Monohydrate (improves strength and endurance) – these ingredients can help make a quality pre-workout supplement.