This product contains some unique ingredients that aren’t used in many other pre-workout supplements – so we’ve analyzed its content and the company behind it, to help you decide whether its worth buying. 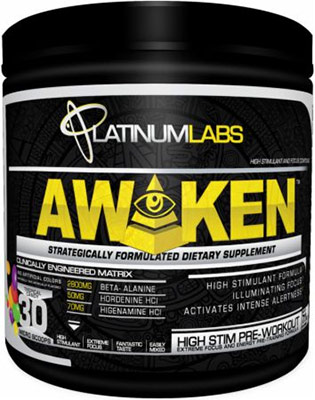 Platinum Labs is a supplements company that prides itself on “providing the highest standard of innovative consumer health products in the world”.

They market a range of products, from fat burners to pre-workout supplements.

This pre-workout supplement contains some interesting ingredients that aren’t very well known in the industry. We’ll take you through the positives and negatives of each ingredient, to analyze the overall effectiveness of this product. 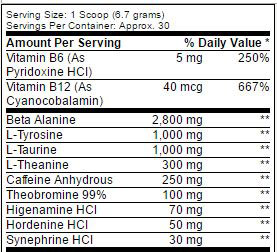 Platinum Labs has made a bad start by including this ingredient. While Beta-Alanine can improve muscular endurance, it also causes a side effect called parestheisa at a dose over 0.8g-1g.

Paresthesia is a tingling on the skin of your face, chest, hands, and extremities – it’s not life threatening, but it’s enough to ruin your workout.

Awaken contains 2.8g of Beta-Alanine, meaning you’re almost certain to experience paresthesia. We recommend staying away from Beta-Alanine to avoid the risk of suffering from paresthesia during your training session.

This is an amino acid that reduces stress levels and improves mental function (memory and reaction time), as it helps produce noradrenaline and dopamine.

While Platinum Labs have dosed this ingredient well (optimal dose is between 500mg-2,000mg), it’s not key to a pre-workout supplement. L-Tyrosine is more suited to a Nootropic product, as a boost in cognition isn’t vital in a pre-workout.

L-Taurine is an organic acid that contains sulfur. It’s most commonly used to reduce cramping due to increasing your blood flow.

It’s not vital in a pre-workout, but there are no negatives in having it in a supplement.

This is one of the best ingredients in Awaken. L-Theanine is a relaxing agent that’s almost exclusively found in tea leaves from the Camellia Sinensis species (eg. green tea).

It works in synergy with caffeine, forming a ‘smart-caffeine’ that delivers enhanced benefits of caffeine without any jitters. You should definitely look out for pre-workout supplements that contain both L-Theanine and Caffeine – to get the best value for money.

Theobromine is a bitter alkaloid of the cacao plant. These plants produce cocoa beans, which are a natural source of theobromine.

It’s a stimulant that contains no caffeine, and is responsible for the boost you feel when eating chocolate. However, Theobromine can cause side effects if consumed in large amounts or when ingested with caffeine.

When it’s taken with caffeine, the effects of both stimulants heighten, increasing the risk of side effects. This is a problem – Awaken contains both caffeine and Theobromine, so you might experience side effects like jitters.

There hasn’t been alot of studies conducted on Theobromine, so it’s still unknown what the safety limit is to consume per day.

This comes from a species of plants and fruits that are believed to have anti-asthmatic properties due to dilating your bronchial tubes.

This process is also believed to encourage your body to burn body fat as fuel, in the same way that Ephedrine does. However, there’s no evidence to prove that it promotes the use of body fat as fuel.

We recommend that you avoid this ingredient until there is enough research to prove it’s safety and effectiveness.

This is a molecule that’s found in plants and is believed to be a fat burning substance.

However, these claims haven’t been backed up by any research – so no-one knows its optimal dose or its safety limit. We recommend staying away from this ingredient until there’s evidence to prove that it’s safe and effective.

More to the point, fat loss isn’t supposed to be the main benefit of a pre-workout – there are already top quality fat burners on the market, so Platinum Labs should’ve made Awaken to provide benefits specifically aimed to boost your workout.

Also known as Bitter Orange Peel, this is a harmful ingredient to have in a supplement. It’s seen as a perfect replacement for Ephedrine (Ephedrine was banned in the US due to causing harmful side effects) – Bitter Orange Peel is an appretite supressant and promotes weight loss.

However, it’s not proven to be much safer than Ephedrine, as it’s caused such side effects as high blood pressure, fainting and irregular heartbeat. 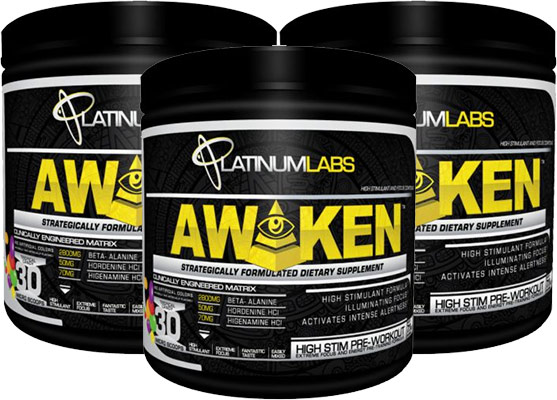 Awaken contains many unstudied ingredients that aren’t proven to be safe and effective. It also contains Synephrine (Bitter Orange Peel) which can be harmful.

Awaken contains ingredients that haven’t been well-studied, such as Theobromine, Higenamine, Hordenine, and Synephrine (Bitter Orange Peel) – these could cause unknown side effects.

We’re also concerned about this product containing both Caffeine and Theobromine – they enhance each other’s stiumlatory effects and increase risks of side effects lile jitters, energy crashes, and insomnia.

However, our biggest concern is with the Synephrine (Bitter Orange Peel) contained. Although it’s believed to be a safe replacement for Ephedrine, it’s not shown to be any less dangerous and caused serious side effects like high blood pressure, fainting, and irregular heartbeat.

Here is a list of the potential side effects from taking Awaken:

The only positive of this pre-workout is that it contains the great combination of Caffeine and L-Theanine – these work in synergy to form a ‘smart-caffeine’ which delivers enhanced benefits of caffeine without the side effects.

However, this ‘smart-caffeine’ combo is ruined by the addition of Theobromine, which increases the risk of side effects when paired with Caffeine (as they’re both stimulants).

The long list of potential side effects should be enough to put you off – and that’s not even including the unknown side effects you could experience from the unstudied ingredients (Theobromine, Higenamine, Hordenine, and Synephrine).

We recommend looking for a product that contains ingredients that are all proven to be safe and effective – there are pre-workout supplements that have no risk of side effects when used correctly.

Ingredients such as L-Citrulline & Beetroot (both promote intense muscle pumps), as well as Creatine Monohydrate (proven to boost strength and endurance), and the ‘smart-caffeine’ combo of Caffeine and L-Theanine make a top quality pre-workout supplement.