Coming with an interesting name, we’ve analyzed this product to see whether it’s effective or a waste of time. 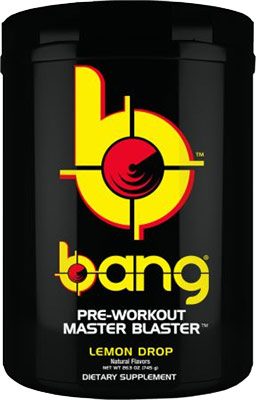 Founded in 1993, VPX Sports prides itself on producing “the highest-grade, university proven sports nutrition supplements and performance beverages in the world”.

However, apart from that, there isn’t much information about them on their website or the internet. Interestingly, their ‘About Us’ section of their site was filled with more details about the CEO, than VPX Sports.

Bang Master Blaster has a very strange ingredients list – there’s great ingredients that are clinically dosed inside, but there’s also negative nutrients that can cause side effects, like Beta-Alanine.

We’ve explained the pro’s and con’s of every ingredient for you, so you can see how effective Bang Master Blaster really is. 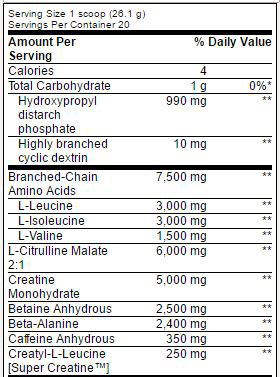 Leucine, Isoleucine, and Valine, are the three Branched Chain Amino Acids that make up BCAAs. They’re found in high protein foods, like eggs and meat, so they can be consumed in a well-planned diet – meaning supplementation isn’t necessary.

BCAAs are added into supplements due to their ability to boost muscle protein synthesis (encourage muscle growth). For this reason, they can be beneficial in protein powders and post workout products.

However, they’re not vital to a pre-workout supplement like Bang Master Blaster – you should follow a well-planned diet instead of supplementing with BCAAs.

The worrying thing is that a quarter of this pre-workout is filled with BCAAs (7,500mg), meaning a large part of this product isn’t needed.

This is one of the best ingredients in any pre-workout, as it promotes intense muscle pumps during your gym session.

Citrulline Malate works by turning into L-Arginine in your kidneys, which raises your nitric oxide levels. From there, your blood vessels dilate (vasodilation), resulting in increased blood flow and great muscle pumps while you lift weights.

But you might be thinking, why not take L-Arginine directly? Well, L-Arginine has a poor absoption rate, meaning it’s ineffective when orally supplement. On the other hand, Citrulline Malate’s proven to deliver its benefits in numerous studies.

VPX Sports has dosed this ingredient perfectly at 6,000mg – Citrulline Malate’s optimal dose is between 6,000mg-8,000mg.

We recommend that you look for this ingredient in its optimal dose, to experience it’s full benefits.

This molecule rapidly produces energy during periods of stress (like when your lifting weights in the gym). It’s been supplemented since the 1990’s, making it one of the most reliable ingredients out there.

The reason why it’s so popular, is because it’s proven to boost your strength and endurance in the gym. VPX Sports has dosed this ingredient well at 5,000mg per serving, meaning you’ll definitely experience this benefit.

However, there’s a potential issue with this serving. Creatine can cause side effects like stomach cramps and diarrhea when consumed in large amounts – for someone new to this ingredient, 5,000mg can be considered a large amount.

We recommend that you try a lower dose (1,000mg-2,000mg) before ingesting large amounts, so you can assess your tolerance and avoid any side effects.

Also known as Trimethylglycine, it’s a molecule found in Beetroot, believed to improve strength and endurance.

However, studies show that Betaine is only as successful as a placebo, meaning it’s effects are very minimal or non-existent. Not only that – it comes with an unwanted side effect.

Betaine causes fishy odors in the breath and body secretions when consumed in large doses (between 2,500mg-6,000mg). Bang Master Blaster contains 2,500mg, meaning you’re at risk of experiencing this side effect.

As it’s not shown to provide any significant improvements to your gym session, it’s not worth suffering from fishy odors for – especially when Creatine Monohydrate offers the same benefits, more effectively.

This is a molecule that’s shown to boost muscular endurance in doses between 2g-5g (2,000mg-5,000mg). For this reason, it’s added into countless supplements on the market – most notably pre-workout products.

However, there’s a problem. Beta-Alanine’s proven to cause paresthesia in doses over 0.8g-1g (800mg-1,000mg), which is a tingling on the skin of your face, chest, hands, and extremities – it’s not life threatening, but it’s uncomfortable enough to ruin your gym session.

Bang Master Blaster contains 2,500mg, meaning you’re almost certain to experience this side effect. We recommend staying away from this ingredient to avoid paresthesia – Creatine Monohydrate offers the same benefit, and is also contained in Bang Master Blaster.

Caffeine Anhydrous is caffeine that’s been dehydrated into powder form to be added into supplements. It’s one of the safest nutrients out there, used worldwide on a daily basis, in products like tea and coffee.

This ingredient is used in supplements due to its ability to improve boost strength and endurance, as well as mental function (memory, focus, reaction time).

However, you need to look out for the dose of caffeine you’re consuming. Large amounts of caffeine can lead to side effects, such as jitters, energy crashes, and insomnia – things you don’t want to suffer from during your gym session.

To regulate your caffeine intake, you should stay under the recommended daily allowance (RDA), which is set at 400mg.

We recommend looking for a pre-workout containing 150mg-200mg servings of Caffeine Anhydrous, so you can experience the benefits without risking side effects – this dose won’t negatively affect anyone, even those sensitive to this nutrient.

This is a form of Creatine that’s mixed with Leucine (a Branched Chain Amino Acid), which is interesting as Bang Master Blaster already contains 3,000mg of Leucine as well as 5,000mg Creatine Monohydrate – so there’s not any need for this ingredient.

Creatine Monohydrate is the most effective and well-studied form of creatine, proven to deliver its benefits. If anything, Creatyl-L-Leucine is increasing the risk of you experiencing negative side effects like stomach cramps and diarrhea, which could ruin your workout.

However, the bitter sweet news is that 250mg of this ingredient isn’t likely to have any effect at all – meaning you’ll avoid experiencing side effects, but also any benefits. 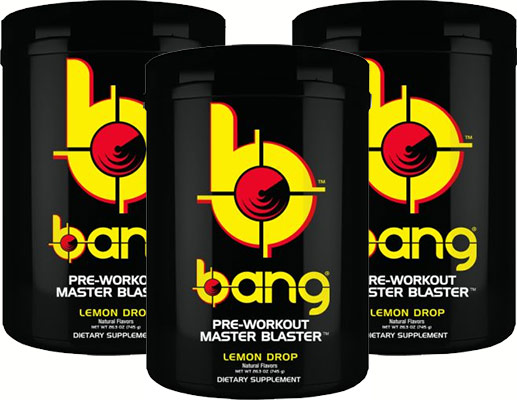 Citrulline Malate and Creatine Monohydrate are dosed perfectly, but Beta-Alanine causes an unwanted side effect.

There’s not many ingredients that can cause side effects, apart from Beta-Alanine and Betaine.

The only positives of this pre-workout are the Citrulline Malate and Creatine Monohydrate content.

Unfortunately, the rest of this product isn’t up to the same standard – you can see from the list of con’s that Bang Master Blaster could be improved.

Many vital ingredients to a pre-workout supplement are missing – such as Beetroot Extract (promotes muscle pumps), and L-Theanine (enhances benefits of caffeine without risking side effects like jitters or energy crashes.

We recommend looking for a product that contains these ingredients alongside Citrulline Malate and Creatine Monohydrate, to get the best value for money and effective pre-workout.