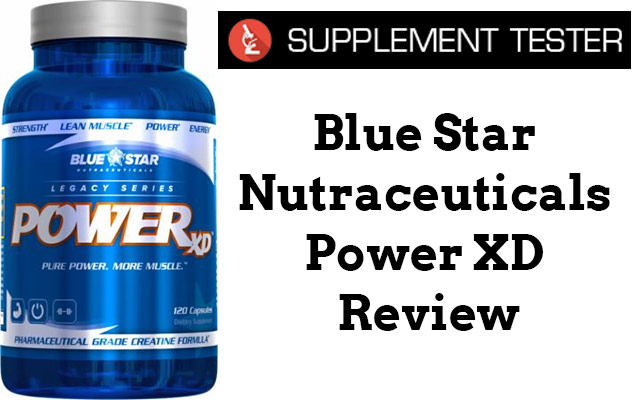 Blue Star Nutraceuticals are known for some popular products on the market – their Blade fat burner is highly rated, along with their testosterone booster.

As a result we got pretty excited when we found out they had released a pre workout supplement.

We found this on bodybuilding.com under the ‘pre-workout category’, but at first glance it looks more like a fancy creatine supplement (we’ll expand on this further down).

As we’ve mentioned, Blue Star Nutraceuticals are quite a popular brand in the supplements industry. It’s well-known for its fat burner called Blade.

As a result, we’re expecting big things from this pre workout/creatine supplement here.

Power XD doesn’t contain many ingredients, so this will be quite a quick review. It’s main ingredients are the 3 different sources of creatine, which aren’t very well researched.

Interestingly, Power XD also contains Panax Ginseng which is known for its ability to boost testosterone levels. However, as every ingredient is part of a proprietary blend, we’re not sure of the exact dosage of this ingredient (meaning it might not be effective here).

What are proprietary blends? Well, these blends are mixtures of numerous ingredients that’re only shown to you under 1 quantity. In Power XD the overall amount of the ‘Power XD Complex’ is 1,502mg – but the dosage of each ingredient isn’t provided.

Ultimately, this increases your risk of suffering from side effects, and you can’t be sure whether each ingredient has been effectively dosed. As a result, we try to avoid supplements containing proprietary blends.

Anyway, we’ll examine the ingredients in more detail for you, below. 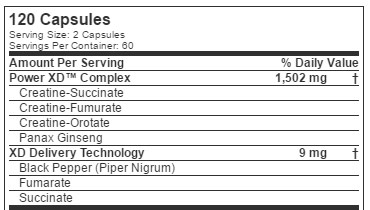 This is the first time we’ve come across this form of creatine, and it’s not been used by any other supplement that we know of.

As a result, it’s not been researched in studies – making it an unreliable ingredient. If you’re wanting to supplement with creatine, then creatine monohydrate is your best choice; this is proven to work in numerous studies and has been used since the 1980’s.

Unfortunately, Blue Star Nutraceuticals have chosen to go with an unreliable form in Power XD.

Creatine-Furmurate is slightly more well-known than succinate, but it’s not used in many other supplements. As a result, this is also an unreliable form of creatine.

Out of all the different forms of creatine in Power XD, creatine-orotate is the most common version. This is sold as an independant product on supplement sites, and is basically creatine monohydrate bound to orotic acid.

So there’s the good news. But here comes the bad; although this contains creatine monohydrate, there haven’t been any studies proving that creatine-orotate is effective yet.

As a result, we can’t consider this as a reliable ingredient in any supplement. Call us old fashioned, but we’ll be sticking to creatine monohydrate instead of trying these newer forms (at least until they’ve proven to be effective).

It’s ironic that this is the best ingredient inside Power XD, but it’s not ideal for a pre workout or creatine supplement…

Basically, the main benefit of Panax Ginseng is that it’s able to boost your testosterone levels when consumed in 3-4 servings per day.

So what’s the problem? Well, raising your test levels doesn’t happen immediately – using Powder XD as a pre workout, you expect to feel benefits within 20-30 minutes.

Although Panax Ginseng is a key testosterone boosting ingredient, it’s not as effective in Powder XD here. Not only that, there might not be an optimal dosage in this supplement anyway; as it’s part of a proprietary blend, we’ll never know.

If you’re wondering whether this is the same stuff you put on your food, then yes, it is. However, it does more than simply season this supplement.

In a nutshell, Black Pepper Extract is able to improve the absorption rate of supplements it’s added into. As a result, it can make a useful bonus ingredient, but it’ll never be a key ingredient.

We’re not sure why Blue Star Nutraceuticals has added Fumarate into Power XD separately; it’s already contained in this supplement in the form of ‘creatine-fumarate’.

As a result, there’s not much need to add any more (and it’s not even proven to work anyway).

Like with fumurate, this is also contained in Power XD in the form of ‘creatine-succinate’. It’s basically an acid that’s believed to reduce inflammation and tissue damage.

However, there’s a reason why it’s not a popular addition to supplements – it’s not proven to work. As a result, this is another unreliable ingredient in Power XD by Blue Star Nutraceuticals. 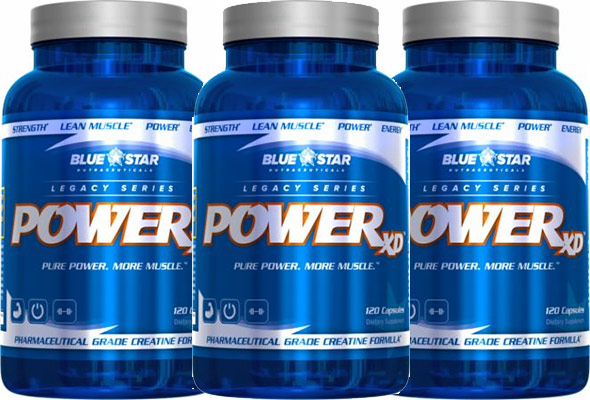 The good thing about Power XD is that it’s doesn’t contain any ingredients to cause any side effects. However, none of the ingredients are likely to help improve your workout either.

Ultimately, Power XD is a fancy creatine supplement; the problem is, none of the forms of creatine have been proven to work.

We would’ve preferred Blue Star Nutraceuticals to simply add creatine monohydrate instead; this is the most reliable form of creatine that’s been known to work since the 1980’s – don’t try to fix something that’s not broken.