BPI Sports haven’t been very innovative by naming their pre-workout product “Best Pre Workout”. But they’ve been a bit more creative with their choice of flavors – you can choose from Apple Pear, Blue Leon Ice, Tropical Freeze, and Watermelon Ice.

Straight away after looking it this product’s claims, there’s a problem – there’s already top quality fat burners on the market, so there’s no need for a pre-workout that’s attempting to offer the same benefit.

But we always give every product a chance, so we’ve analyzed this supplements contents to see whether it really is the “Best Pre Workout”. 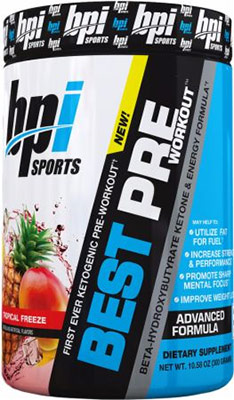 Founded in 2009, BPI Sports won numerous awards, such as the “Rising Star of the Year 2011”, and are known for being endorsed by 4x Mr. Olympia, Jay Cutler.

This supplements company market a range of products, from testosterone boosters to pre-workouts.

As soon as you look at this pre-workout’s ingredient list, you’re faced with two proprietary blends – this is bad. But you might be thinking, why are they negative?

Proprietary blends are a mixture of numerous ingredients that are shown to you as one quantity – this means that you’ll never know the exact amount of each individual ingredient inside, which is a problem if you’re sensitive to any.

These blends are sometimes used by companies to cut costs. They’ll fill them with ineffective, cheaper ingredients and add minimal amounts of the beneficial ingredients – but all you’ll see are the names of the ingredients.

There are some interesting ingredients in BPI Sports’ pre-workout, so let’s take a closer look to see whether they’re effective at improving your training session. 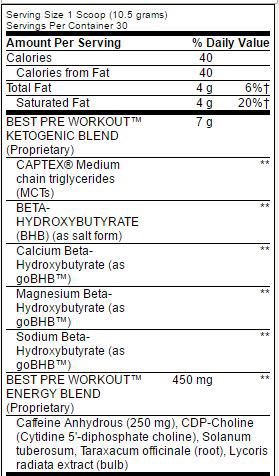 This is the first proprietary blend inside BPI Sports’ product. It consists of 5 different ingredients, but you’ll never know the exact amount of them – only the overall quantity of the blend is shown (7g).

The name of this blend suggests that it aids fat loss. This is worrying, as the most of the product is made up of this blend – BPI’s supplement is meant to be a pre-workout supplement, not a fat burner.

This is found in high amounts in Coconut Oil and Palm Kernal Oil. BPI Sports has included this in their pre-workout, as MCTs are believed to promote fat loss.

While there have been studies showing MCT’s increase fat loss, the same number of studies prove it to be ineffective. It’s also believed that MCTs enhance sporting performance, but there’s no research on this benefit.

Fat loss isn’t a key benefit you look for when choosing a pre-workout – there’s already top quality fat burners that will do a much better job, so BPI Sports should’ve focused on benefiting your training session.

This is an acid that’s effective in treating depression, anxiety, and cognitive impairment.

Beta-Hydroxybutyrate is also known as an Exogenous Ketone (a ketone not produced by your body and has to be digested), that’s thought to be an alternative fuel source to glucose. However, there’s been no studies to prove this.

Overall, it’s an ineffective ingredient for a pre-workout supplement.

goBHB is a patented blend formulated by Compound Solutions – it’s made up of calcium, magnesium, and sodium Beta-Hydroxybutyrate salts.

These are believed to aid fat loss and suppress appetite, but there’s not been any studies to prove that goBHB delivers these benefits. The lack of research also means that this blend could cause unknown side effects.

We recommend staying away from unstudied ingredients to avoid any potential side effects.

This is the second blend that’s contained in BPI Sports’ pre-workout supplement. It’s clearly designed to boost your energy levels, which is a great benefit of a pre-workout – but this blend is only 450mg overall.

It’s strange that BPI Sports has added more ingredients to attempt to aid fat loss when this is meant to be primarily a pre-workout supplement.

We’ll take you through the ingredients in this blend, and see whether it’s possible for them to be effective:

This is definitely the best ingredient in BPI Sports’ product – it’s a great addition to any pre-workout supplement as it boosts strength, endurance, and mental function (memory and reaction time).

BPI Sports has provided the amount of Caffeine inside (250mg) which is a good amount – the perfect serving of caffeine is 150mg-300mg, depending on your tolerance.

We recommend looking for a Caffeine dose of 150-mg-300mg on your search for a quality pre-workout.

CDP-Choline is a Nootropic compound – this means it boosts your mental function (memory, focus, and reaction time). It’s a strange addition to this blend, as CDP-Choline offers no energy boosting benefits.

However, there’s been no studies to prove that it’s effective when consumed in a supplement – ultimately, it could be ineffective in this pre-workout.

Also known as the common Dandelion, it’s harvested from the wild or grown as a leaf vegetable. Although Dandelion’s been used for many illnesses and conditions, it’s not been proven to actually effectively treat anything in studies.

The only benefit Dandelion offers is being an diuretic – meaning it promotes urine production, reducing bloating. However, this doesn’t benefit your training session.

Dandelion can also cause side effects to those allergic to ragweed (eg. daisies, chrysanthemums, and marigolds).

Also known as Red Spider Lily or Red Magic Lily, this is the most worrying ingredient in BPI Sports’ pre-workout.

Lycoris Radiata Bulbs are known to be highly poisonous and are used to keep pest and mice away in Japan – it’s also mostly associated with death in Asia.

This ingredient offers no benefits to your gym session, but comes with cause for concern. 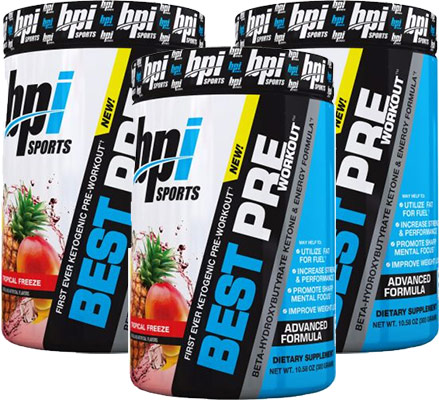 The only good ingredient contained is Caffeine. It’s worrying that it has a highly poisoneous extract inside (Lycoris Radiata Bulb).

Most of the ingredients in BPI Sports’ pre-workout haven’t been well-studied, meaning they could cause unknown side effects. The Dandelion inside is potentially harmful to those that are allergic to ragweed (daises, chrysanthemums, and marigolds)

However, the most worrying ingredient is the highly poisonous extract (Lycoris Radiata Bulb Extract) contained  in a proprietary blend – meaning you don’t know the exact amount of this ingredient in this supplement. BPI Sports should’ve definitely left this ingredient out.

BPI Sports has tried to create a pre-workout using unique ingredients, but it hasn’t paid off.

This supplement is mostly formed with unproven, ineffective ingredients that are believed to offer fat burning benefits – fat loss shouldn’t be the primary focus for a pre-workout.

However, the worst thing about this product is the inclusion of Lycoris Radiata Bulb, which is highly poisonous. This should be enough to keep you away from this pre-workout.

We recommend looking for a pre-workout with 100% natural, safe ingredients, such as Citrulline Malate & Beetroot Extract (both promote muscle pumps), Creatine Monohydrate (boosts strength), as well as caffeine and L-Theanine (both from a smart-caffeine, giving you heightened benefits of Caffeine, without the risk of jitters or energy crashes).