Elevate is one of several pre-workout products from Bulk Powders. We’ve tried Bulk Powders’ products before and were quite impressed, but we want to see whether Elevate lives up the brand’s usual standards.

The Elevate pre-workout claims to promote:

The company calls Elevate “the UK’s best pre-workout supplement” – but how does it really compare to rival products? Let’s find out in our Bulk Powders Elevate review…

Bulk Powders is a UK supplement brand that began in 2005 as a trading name of Sports Supplements Ltd.

The company’s products include protein powders, creatines, weight-gain supplements and many more.

The Bulk Powders name is certainly well-known in the UK, but it doesn’t have any standing in the USA. In fact, Bulk Powders USA is a completely different entity.

Nevertheless, the brand has high-profile endorsements from the likes of Anthony Joshua and Tom Daley.

Proprietary blends are the first thing we look for as they’re a huge red flag. This is because hidden dose info doesn’t tell you how much you’re paying for and whether you’ll get the results you want.

And true to the brand’s word, Elevate doesn’t use any proprietary blends – which is great!

That said, this pre-workout contains one or two ingredients that we don’t like, alongside some we do. We’re also surprised to see a couple of ingredients we’ve never heard of. 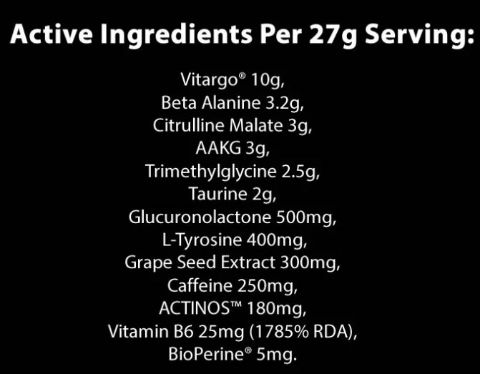 After completing hundreds of pre-workout reviews, Vitargo is unusual in that we’ve never seen it in any other product.

Its makers call Vitargo “the best carbohydrate in the world.” A little digging reveals its a molecular carb derived from barley starch, potato starch of waxy maize.

The product’s own website promises to fuel your muscles more effectively for “enhanced same-day fuel recovery 70% faster within 1-hour.”

The people behind Vitargo claim it’s been tested “by independent, university-based” scientists – and it even provides download links to three studies.

Yet this “research” was almost certainly funded by at least one organization with a vested interest in proving the worth of Vitargo. As a result, the evidence of Vitargo’s usefulness as a pre-workout is possible unreliable.

Beta-Alanine is an amino acid that some research suggests can boost exercise performance and reduce fatigue.

Despite this, many lifters and athletes find Beta-Alanine ruins their workouts due to paresthesia – a condition typified by unpleasant itching and tingling in the hands, chest or extremities.

While this can be avoided by using an extended-release formula, the whole point of a pre-workout is to give you a quick burst of energy. With this in mind, Bulk Powders Elevate is bound to contain the short-release version, which could increase the risk of paresthesia.

Citrulline Malate is an awesome blend of L-Citrulline and Malic Acid – and it’s one of the best pre-workout ingredients around.

The ingredient is proven to improve endurance and reduce fatigue. It does this by helping to dilate the blood vessels and sending more vital nutrients to your muscles.

Meanwhile, Citrulline doesn’t cause any side effects, due to the way in which it increases the amount of L-Arginine and L-Ornithine in the blood.

However, Elevate contains just 3000mg of Citrulline Malate, which is around half the optimal amount.

Arginine Alpha-Ketoglutarate (AAKG) is a dietary amino acid that you’ll see in a lot of pre-workouts – although that doesn’t mean it’s good.
When in the system, Arginine produces nitric oxide, which widens the blood vessels, and sends more nutrients to your muscles for enhanced pumps and reduced fatigue. But here’s the problem…
The human body doesn’t absorb Arginine very well. As an Arginine precursor, the easily-absorbed Citrulline Malate helps the body produce nitric oxide much more efficiently.
For this reason, it would’ve made more sense to increase the dose of Citrulline Malate, rather than including it alongside Arginine.

More commonly known as Betaine, Trimethylglycine is a metabolite of Choline.

And like Choline, Betaine can make your breath and body odor smell like rotten fish. This is why we always advise against taking it.

But does Trimethylglycine serve any purpose in a pre-workout? Well, some research points to small reductions in exercise-induced fatigue, but further studies failed to find any link between the compound and enhanced performance.

Taurine is an organic acid mistakenly thought to be an energy booster due to its presence in a lot of high-Caffeine energy drinks.

However, many manufacturers use it as an anti-cramping agent to help prevent stomach aches caused by high doses of Caffeine.

And considering the high dose of Caffeine (150-200mg is optimal for a pre-workout), the use of Taurine here makes sense.

Glucuronolactone is a molecule also found in a lot of energy drinks. But despite its widespread use, there’s very little research on it. One rodent study showed a small improvement in swimming performance.

However, there’s no evidence it works in humans and we’re therefore disappointed to come across Glucuronolactone in this Bulk Powders Elevate review.

Another amino acid on this list, L-Tyrosine is marketed as a focus enhancer, and for its supposed ability to reduce fatigue. However, L-Tyrosine does NOT improve workout performance.

As you’re no doubt aware, Caffeine is a popular stimulant.

As the subject of robust research over many years, Caffeine is shown to boost running capacity, raise strength, enhance reaction times and increase training volume – which makes it a key ingredient in any good pre-workout.

But we – and many lifters who get in touch with us – find a single hit 150-200mg to be the ideal dose to take advantage of all Caffeine’s benefits. Elevate contains 250mg of Caffeine, which is too much – and this may make you feel anxious or jittery.

Bioperine is the name for a patented form of Piperine (or Black Pepper Extract). Its main function is to increase the bioavailability of other ingredients. 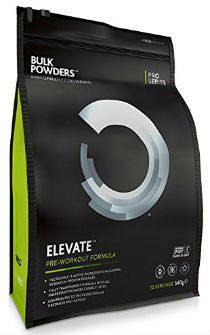 As it contains natural ingredients, Bulk Powders Elevate is safe to take. However, you may experience the following side effects:

Despite Bulk Powders’ claim that Elevate is the UK’s best pre-workout, this isn’t the case. At best, it’s OK.

We applaud the brand’s dedication to transparency and natural ingredients, which is part of why we’re such fans of some of its other products. And we’re always pleased to find Citrulline Malate and Caffeine in the pre-workouts we review.

However, Bulk Powders Elevate contains too many ingredients that don’t do the job they’re supposed to. For example, the human body doesn’t absorb Arginine very well, so it won’t improve muscle pumps as well as its precursor, Citrulline.

Meanwhile, research also shows taking L-Tyrosine doesn’t enhance performance. So while Elevate is better than a lot of pre-workouts we test, you could do a lot better.