This is marketed as Cellucor’s most powerful pre-workout supplement, with an “explosive energy intensifier”. We’ve analyzed C4 50x’s ingredients, to see whether it can live up to the hype. 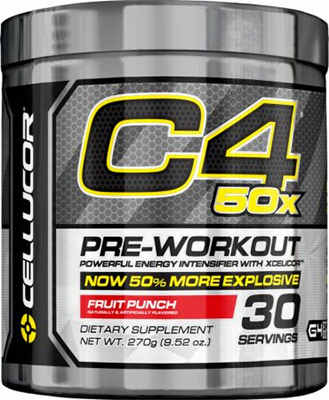 Founded in 2002, Cellucor pride themselves on being “an award winning industry leader committed to premium products”.

They market a range of products, from fat burners to whey protein – but their most successful series is their C4 pre-workout supplements.

C4 50x contains 3 ingredients, as well as a huge proprietary blend filled with numerous nutrients – this is negative. But why?

Well, a proprietary blend is a mixture of numerous ingredients, shown to you as one quantity. Ultimately, you’ll never the exact doses of each ingredient inside these blends, and it’s a problem when stimulants are contained – some are sensitive to stimulants and might experience side effects. 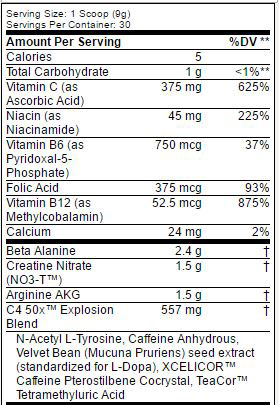 Cellucor hasn’t gotten off to a great start here. While Beta-Alanine’s been shown to enhance muscular endurance, it can cause paresthesia in doses over 0.8g-1g.

Paresthesia is a tingling on the skin of your face, chest, hands, and extremities – it’s not life threatening, but it’ll ruin your gym session.

As C4 50x contains 2.4g of Beta-Alanine, you’re almost certain to experience paresthesia. We recommend avoiding Beta-Alanine, so stay away from this side effect.

This is simply creatine mixed with nitrate, which is believed to boost your nitric oxide levels, as well as strength and endurance.

We recommend that you stick with Creatine Monohydrate, as it’s been effectively supplemented since the 1990’s, proven to deliver benefits.

This is a salt of arginine and alpha-ketoglutaric acid that’s believed to raise nitric oxide levels, as well as muscle protein synthesis (muscle growth) and strength.

However, studies have shown that it has no effect when orally supplemented – 1 study even showed that it had negative effects, lowering participants’ endurance and strength.

We recommend that you choose a product containing more reliable ingredients, such as Citrulline Malate – which has a great absorption rate, and is proven to raise nitric oxide levels.

This is the proprietary blend contained in C4 50x, so you’ll never know the exact doses of each ingredient inside. This is a problem, especially if you’re sensitive to any nutrients in this blend.

With two different forms of Caffeine contained, it’s likely to have a high overall dose of Caffeine – this can lead to side effects, like jitters or energy crashes.

We’ll analyze the most important ingredients inside:

This is a cognitive booster that’s often used in Nootropic supplements. While it’s shown to improve memory and focus, it’s not vital in a pre workout – if Caffeine’s dosed correctly, it will provide enough of a cognitive boost to benefit your gym session.

Simply dehydrated Caffeine, so it can be added into supplements. This can be a key pre workout ingredient when dosed correctly (between 150-200mg).

But here’s the problem – it’s in a proprietary blend, so you’ll never know the exact dose contained. Why’s that bad? Caffeine can cause side effects like jitters and energy crashes when consumed in large doses (over 300mg).

You’re taking a risk here, and you’ll only know there’s too much Caffeine in C4 5ox after you begin experiencing unwanted side effects – which will ruin your workout.

To avoid these negatives, make sure that a pre workout supplement contains 150-200mg of Caffeine before taking it.

This is Caffeine mixed with Pterostilbene, which is believed to extend the effects of Caffeine by up to 6 hours. But this is a problem.

As there’s already Caffeine Anhydrous in this blend, Caffeine Pterostilbene Cocrystal simply increases the risks of side effects – like jitters and energy crashes.

You’ll never know for sure before taking it, as no-one knows the exact dose of Caffeine in C4 50x – a big issue with proprietary blends. 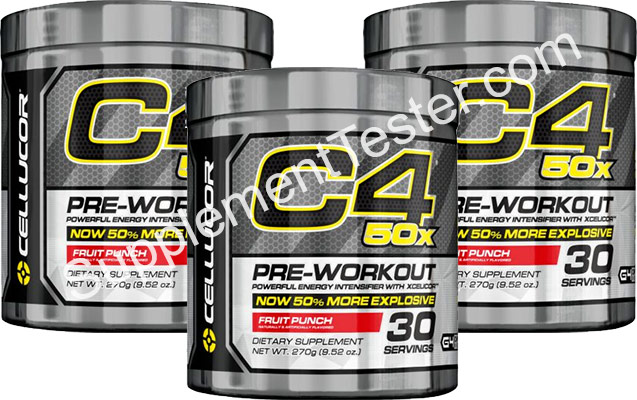 This pre workout is missing numerous key ingredients, containing less effective ingredient that can cause side effects instead.

There are two things that can cause side effects in C4 50x – Beta-Alanine, and the unknown dose of Caffeine. Cellucor could’ve avoided one of these issues by simply providing the exact dose of Caffeine, instead of adding any proprietary blends into this pre workout.

For example, they should’ve simply added Creatine Monohydrate instead of Creatine Nitrate, as it’s been proven to boost strength and endurance in studies since the 1990’s.

We recommend looking for a pre workout with no side effects, containing more key pre workout ingredients – check out the link below to see the best pre workouts on the market: