We enjoy comparing products here at SupplementTester, to see which is the best on the market. So we’re comparing 2 very popular pre workouts in this review – C4 vs Mr Hyde.

It’s strange that an increase in strength hasn’t been advertised by either product. However, we noticed that Mr Hyde contained creatine monohydrate, so we’ll look at the dosage of that in the next section.

So let’s get started and see which pre workout is better than the other.

Cellucor are a supplements company with a massive reputation. They’ve been around for a very long time and are well known for their C4 series of pre workouts and P6 line of testosterone boosters.

But we’ve found that reputation doesn’t always ensure a great supplement. So we’ll be checking whether C4 really should be considered as the best pre workout on the market.

Also based in USA, ProSupps are another well-established supplements company. Like Cellucor, their best selling products are also pre workouts.

However, we’re keen to see whether Mr Hyde really can beat the more popular C4.

When it comes to supplements, it’s the ingredients inside that make or break a product. As C4 and Mr Hyde both contain different nutrients, it’ll be interested to see which company researched and made the better choices.

We won’t waste any time; we’ll get straight into examining the ingredients inside each pre workout. Ultimately, by the end of this review, you’ll know exactly which pre workout is better, and why. 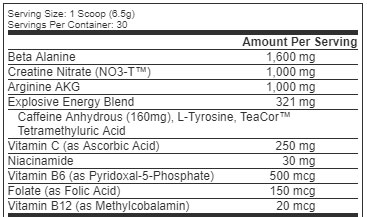 Everyone has mixed opinions about beta-alanine, because it can cause a side effect known as paresthesia.

What’s paresthsia? Answer: tingling on the skin of your face, chest, hands and extremities.

However, it’s also shown to be effective at raising your endurance levels in the gym.

Ultimately, it’s down to whether you’re willing to suffer from paresthesia or not. We prefer not to, however we can see why others don’t mind taking beta-alanine.

A mixture of creatine and nitrate, this should be able to raise your nitric oxide levels.

However, as it’s a fairly recent addition to supplements, there isn’t a great deal of evidence to prove whether it actually works.

As a result, we consider creatine nitrate to be an unreliable ingredient in C4 pre workout.

Personally, we would have chosen the reliable, creatine monohydrate; it’s been used for decades and is one of the most reliable nutrients in the industry – there’s no need to fix something that’s not broken.

Also known as AAKG, it’s the salt of l-arginine. AAKG is thought to raise your nitric oxide levels, but it hasn’t shown to be very reliable in human studies.

As a result, we have to consider this as an unreliable ingredient in C4 pre workout.

It’s important to know that this is a proprietary blend in C4 pre workout. You can see this, because it contains a list of ingredients under a fancy title (in this case, ‘explosive energy blend’).

But here’s the bad news; Cellucor have added caffeine into this blend.

Why is this bad? Well, consuming an unknown quantity of caffeine can cause jitters and energy crashes.

What’s a safe dosage of caffeine? We recommend staying under 200mg caffeine per serving to stay safe from jittery side effects.

However, this is hard to do when a proprietary blend contains more than 1 stimulant; C4 contains both caffeine and theacrine, increasing your risk of suffering jitters. 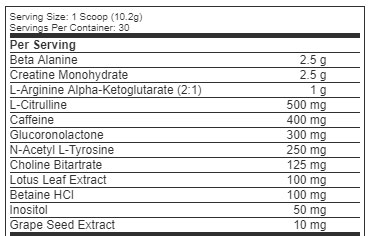 We don’t want this review to drag on like a bad one-night-stand, or linger like a bad fart. So we’ll choose the most important nutrients that you need to know about and skip past the ones that don’t need to be mentioned.

It’s a win-win for both of us, so let’s get started…

We’ve already explained the arguments for and against beta-alanine with C4.

In case you skimmed past, beta-alanine causes paresthesia, but can also enhance muscular endurance.

Now, this is an ingredient that can help set Mr Hyde apart from C4 pre workout.

Creatine monohydrate is one of the best compounds when it comes increasing your strength and endurance. Everyone knows that it works, as it’s been proven to be effective through the ages.

ProSupps have also dosed this ingredient well, so there’s no problems here. Great work by them.

AAKG is another nutrient that we’ve already examined for you in the C4 section above, so we won’t bore you by going over it again.

L-citrulline is one of our favorite ingredients in pre workout supplements. It’s proven to raise your nitric oxide levels, increasing your blood flow and enhancing your muscle pumps in the gym.

So ProSupps have clearly done their research here. However, they’ve made a mistake by not dosing it correctly; studies show that you need at least 3,000mg l-citrulline for it to work.

We mentioned that you should consume under 200mg caffeine per serving. Well, ProSupps have also done very badly by adding a massive 400mg dosage in Mr Hyde.

In a nutshell, this makes it certain for most people to suffer from jitters. In fact, only those very tolerant to caffeine will benefit from this massive dosage.

This alone would make us recommend you to avoid Mr Hyde…

Choline has gained attention for being able to cause your body odor to smell fishy.

This side effect is also caused by betaine too, and is something that puts us off consuming these ingredients. The worst thing is that they don’t offer any benefits to actually improve your performance in the gym.

Grape seed extract is interesting, as in theory, it should be able to raise your nitric oxide levels.

However, studies have failed to prove whether grape seed extract is able increase your blood flow and enhance your muscle pumps. As a result, this remains an unreliable ingredient in Mr Hyde.

In terms of side effects, the main concerns with Cellucor’s C4 are that caffeine is inside a proprietary blend (so no-one knows the exact dosage of it inside). Ultimately, this can cause jitters and energy crashes.

Secondly, while beta-alanine can benefit you, it’s proven to also cause paresthesia, which is a tingling on the skin of your face, chest, hands and extremities.

While Mr Hyde doesn’t contain caffeine in a proprietary blend, ProSupps have overdosed it at 400mg per serving; this will cause most people jitters and is double the amount we recommend you to consume.

But that’s not all. Choline & betaine have shown to cause fishy body odors, with beta-alanine causing your skin to tingle.

So as you can see, none of these pre workouts are free from side effects. If Cellucor hadn’t added a proprietary blend, then it would have taken the lead at this point.

We have to point out that both are likely to cause side effects; Mr Hyde contains a massive 400mg caffeine per serving, while no-one knows the exact dosage of caffeine in C4 due it being hidden inside a proprietary blend.

So by choosing either of these pre workouts, you’re putting yourself at risk from jittery side effects.

Taking away the caffeine problem, we would then award Mr Hyde as the winner of this battle. But as we mentioned, we can’t recommend you to choose either of these products.

As a result, we recommend that you look at the highest rated pre workouts available instead; these haven’t shown to cause side effects and will provide better value for money.