Defcon 1 has quite a large nutrient profile – but is it effective? In this review, we’ll take you through the pros and cons, to show you how good this pre workout really is. 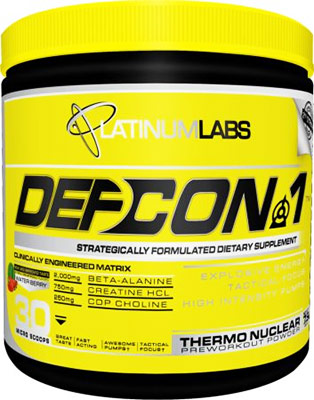 Platinum Labs is a supplements company that prides themselves on “providing the highest standard of innovative consumer health products in the world”.

They market a range of products, from pre workouts to fat burners. But apart from that, there wasn’t much more information available online.

One positive straight away, is that Defcon 1 doesn’t contain any propietary blends – meaning you know exactly what you’re getting, as no ingredients are hidden in any blends.

But once you look deeper into its ingredient list, we saw some key ingredients, mixed with some potentially harmful ones. See for yourself: 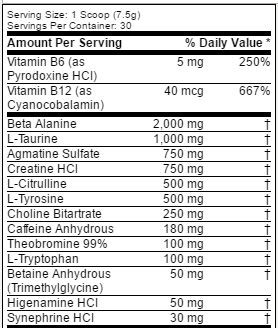 This molecule is added into pre workout supplements, as it can improve muscular endurance. But it can also cause paresthesia in doses over 0.8-1g.

What’s paresthesia? Well, it’s a tingling on the skin of your face, chest, hands, and extremities – not life threatening, but enough to ruin your workout.

This is an organic acid that contains sulfur. It offers one benefit – reducing cramps.

While there isn’t really anything negative about L-Taurine, it’s not a key pre workout ingredient.

This has shown to reduce pain and depression in studies, but it’s not a key pre workout ingredient.

Not only that, participants took 1,300mg doses in studies that proved it alleviates pain – there’s only 750mg in Defcon 1, meaning it might not even be effective in this pre workout.

Also known as Creatine Hydrochloride, it’s a form of Creatine that’s believed to be more water soluble than the more popular Creatine Monohydrate.

This can be a key pre workout ingredient when dosed properly. Why? It can deliver intense muscle pumps while you lift weights in the gym, due to its ability to turn into L-Arginine in your kidneys – which increases your nitric oxide levels and blood flow.

But here’s the problem: it’s been seriously under-dosed in Defcon 1.

L-Citrulline’s optimal dose is between 6,000mg-8,000mg. There’s only 500mg of this ingredient in this pre workout, meaning it’s almost certain to be ineffective here.

We recommend looking for a pre workout supplement containing at least 6,000mg of L-Citrulline.

While this has shown to boost cognition, this is L-Tyrosine’s only benefit. For this reason, it’s more suited to a Nootropic supplement.

There are many other ingredients that can boost cognition, as well as providing other benefits to enhance your gym session.

This molecule’s believed to improve endurance and cognition. However, studies have shown that it doesn’t provide any benefits at all.

Not only that, it can cause an unwanted side effect – Choline Bitartrate is known to cause fishy odors in your breath and body secretions.

This is the best ingredient in Defcon 1, as it’s been dosed correctly. 180g of Caffeine will deliver benefits like improved strength, endurance, and focus in the gym, without causing any side effects like jitters and energy crashes.

We recommend looking for a pre workout that contains 150-200mg of Caffeine, on your search for a quality product.

This is found in Cocoa and is what causes the bitter flavor in dark chocolate. It’s a stimulant similar in structure to Caffeine.

However, there hasn’t been many studies conducted on this ingredient, meaning it’s not reliable. But it’s known to cause some side effects, such as feeling sick, loss f appetite, restlessness and anxiety.

Defcon 1 already contains a powerful, reliable stimulant (Caffeine), so there’s no need for Theobromine. Platinum Labs should’ve left this out.

This is a strange choice of ingredient to add into a pre workout. It’s most commonly used as an anti-depressant and sleep aid – sold over the coutner in the USA, Canada, and the UK.

A pre workout is designed to boost your energy levels, not help you sleep. So Tryptophan is definitely not an ingredient that’s suited to a pre workout supplement.

This is believed to reduce fatigue and improve endurance in the gym. However, studies have shown that it’s very unreliable in delivering these benefits.

But there’s more bad news – Betaine’s known to cause fishy odors in your breath and body secretions. As it comes with no benefits, but an unwanted side effect, it’s worth avoiding this ingredient.

This molecule is extracted from numerous fruits and plants, and is believed to be a fat burning ingredient. However, there’s been no human studies on this ingredient, so it’s unknown whether it’s actually effective.

Not only that, fat loss isn’t a key benefit of using a pre workout supplement – that’s where fat burner supplements can come in handy, but this should be left to these specialized products.

Also known as Bitter Orange Peel. Not only is this ingredient not suited to a pre workout supplement (it’s main benefit is aiding fat loss), it’s been banned in numerous countries including the UK – due to causing harmful side effects.

Ingredients don’t just get banned for no reason – it’s to keep you safe. For this reason, we strongly recommend staying away from products containing Synephrine. 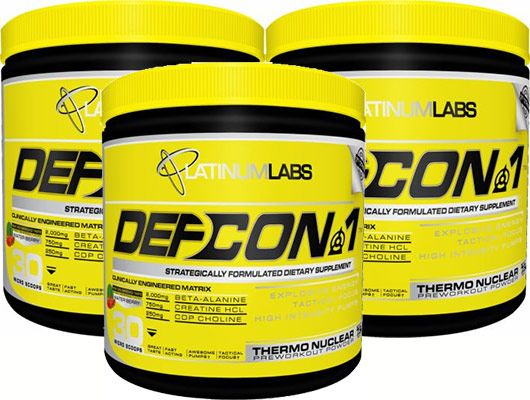 Defcon 1 contains numerous ingredients that can cause side effects – Beta-Alanine, Synephrine, Choline Bitartrate, and Betaine.

Here’s the list of the potential side effects from using Defcon 1:

Platinum Labs should’ve done more research into pre workout ingredients – which ones are effective, and which ones can be harmful or ineffective.

They’ve seriously under-dosed L-Citrulline to the point that it’s ineffective. This is a shame, as it can be a key pre workout ingredient when dosed correctly (between 6,000mg-8,000mg).

The list of potential side effects should be enough to put you off Defcon 1. We recommend looking at pre workout supplements that cause little or no side effects, while delivering benefits to boost your gym session.