Nitraflex is a pre-workout supplement created by GAT Sport. It comes in a variety of flavors, including Black Cherry, Fruit Punch, Green Apple, and Watermelon.

We’ve analyzed Nitraflex’s ingredient list, to determine it’s safety and effectiveness – saving you time when deciding whether to try it out. 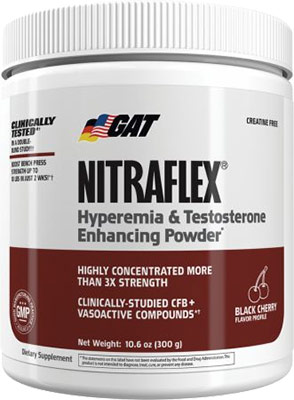 GAT Sport are a supplements company that prides itself on marketing “physique and performance enhancing products”.

They offer a range of supplements, from fat burners to protein powders, and sponsor professional bodybuilders such as Sadik Hadzovic. However, there isn’t much more information about GAT Sport on their website.

Straight away we see a negative when looking at Nitraflex’s ingredient list – it contains three huge proprietary blends. But you might be thinking, what are they and why is this a bad thing?

Proprietary blends are a mixture of numerous ingredients that are shown to you as one quantity. This means that you’ll never know the exact amount of each individual ingredient inside.

They’re bad, because proprietary blends are one of the biggest gimmicks in the supplements industry – they’re used by companies to cut costs, by filling them with cheaper, ineffective ingredients while adding minimal amounts of good ingredients.

The key thing is, you’ll never know how effective a product is, if you don’t know whether an ingredient is contained in its optimal amount.

However, there are a few postitives. Nitraflex contains great ingredients such as L-Citrulline and Citrulline Malate. 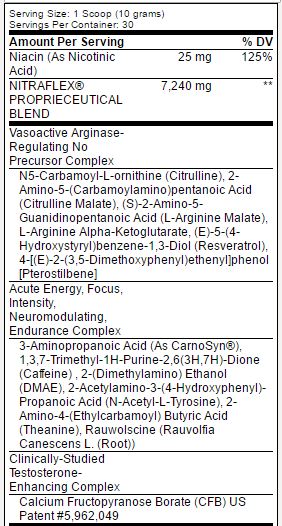 This is the first proprietary blend contained in Nitraflex. We’ll go through the main ingredients in this blend, so you can see if it’s adding any value to Nitraflex.

These are two great ingredients to have in a pre-workout supplement. We’ve grouped them together, as they’re essentially the same nutrient – Citrulline Malate is simply L-Citrulline mixed with Malic Acid.

L-Citrulline and Citrulline Malate turn into L-Arginine in your kidneys after oral supplementation. The boost in nitric oxide levels will lead to your blood vessels dilating (vasodilation) – basically, your blood flow increases and you’ll experience intense muscle pumps in the gym.

The other issue is the dosing – interestingly, GAT Sport have provided the Citrulline Malate dose (3g), but leave you guessing the amount of L-Citrulline inside.

This is a problem, as the optimal dose of both L-Citrulline & Citrulline Malate is between 6,000mg-8,000mg. The overall quantity of all 3 proprietary blends is 7,240, meaning it’s extremely unlikely that there’s enough Citrulline in Nitraflex to be effective.

We recommend looking for a pre-workout that contains Citrulline Malate in its optimal dose (at least 6,000mg) – to experience intense muscle pumps while you lift weights in the gym.

GAT Sport have made a mistake by including this ingredient in Nitraflex. This is simply just L-Arginine with Malic Acid added to it.

This is why L-Citulline or Citrulline Malate are better ingredients to increase your nitric oxide levels – they have a much better absorption rate and turn into L-Arginine in your kidneys.

L-Arginine Malate is taking up valuable space that more Citrulline could’ve used to benefit you.

This molecule is believed to be a bioactive component of blueberries. It’s generally used in health supplements, as it’s shown to reduce blood pressure, and help regulate cholesterol levels.

However, Pterostibene offers no benefits to aid your training session in the gym. This is most likely one of the cheaper, ineffective ingredients that GAT Sport have used to fill their proprietary blend with, to cut costs – it’s part of a proprietary blend so you’ll never know the exact amount of Pterostibene in Nitraflex.

This is the second proprietary blend in Nitraflex. We’ll analyze the ingredients inside to see how effective they are in benefiting your gym workout.

This is named “CarnoSyn” on Nitraflex’s ingredient list as its a form of Beta-Alanine that’s been patented by CarnoSyn – but at the end of the day, it’s still Beta-Alanine.

GAT Sport should’ve left this ingredient out of Nitraflex – while it can boost muscular endurance, it’s also shown to cause paresthesia (a tingling on the skin of your face, chest, hands, and extremities) in doses over 0.8g-1g.

Interestingly, GAT Sport have provided the dose of Beta-Alanine contained in Nitraflex, at 1.5g. This over the 0.8g-1g limit, so you’re likely to experience paresthesia when taking this pre-workout.

Although paresthesia isn’t life threatening, it’s uncomfortable enough to ruin your workout. We recommend that you stay away from Beta-Alanine, to avoid experiencing paresthesia during your workout.

DMAE is a compound that’s shown to improve mental function (memory and reaction time). It works by reducing the number of harmful substances that affect your cognition as you get older.

However, there’s a huge negative to DMAE – it can cause defects in unborn infants (teratogenic). The negative definitely outweights the benefit on this ingredient, and we strongly recommend that you stay away from DMAE to avoid this side effect.

What’s even more worrying, is that it’s part of a proprietary blend, so you don’t know the exact amount of DMAE in Nitraflex. If there’s a large dose of DMAE in this pre-workout, then the risk of it causing defects in unborn infants increases.

This is an amino acid that reduces stress levels and improves mental function (memory and reaction time) due to producing noradrenaline and dopamine.

L-Tyrosine isn’t key in a pre-workout, but there’s no negatives to having it in a supplement. However, it’s more suited to a Nootropic product, and it’s taking up space where more Citrulline could have benefited from.

Caffeine is one of the best ingredients in Nitraflex. It’s one of the safest nutrients out there, used in countless products worldwide, like tea and coffee.

It’s proven to enhance your strength, endurance, and mental function (memory and reaction time). However, there’s a problem with it in Nitraflex – it’s in a proprietary blend so you don’t know the exact dose of Caffeine inside.

This is a problem, as the only concern about Caffeine is its dosing – if you consume a high amount of it, then you’ll experience side effects like jitters and energy crashes.

We recommend looking for a pre-workout that contains 150-200mg Caffeine per serving, to stay away from unwanted side effects.

We’ll give credit where it’s due – GAT Sport have done well by including L-Theanine alongside Caffeine in their pre-workout.

L-Theanine is a relaxing agent that works in synergy with Caffeine to form a ‘smart caffine’ – providing enhanced benefits of Caffeine without the unwanted side effects like jitters at smaller doses.

However, as L-Theanine is part of a proprietary blend, you don’t know the exact amount of it contained in Nitraflex. There could be a minimal amount that has no effect on you –  the point is, you’ll never know for sure.

We recommend looking for a pre-workout supplement that contains both Caffeine and L-Theanine, without any proprietary blends – so you know exactly how effective these ingredients are in the product.

This is a molecule that’s similar in structure, and effects, to Yohimbine. This is a problem – Yohimbine has been banned in the UK and only available with a prescription in USA, as it caused side effects like nervousness, irritability, insomnia, headache, nausea, anxiety, and sweating.

There hasn’t been many studies conducted on this ingredient so it’s not even proven that Rauwolscine has fat burning properties like Yohimbine. More to the point, there’s no need for a fat burning ingredient in a pre-workout supplement.

There are already top quality fat burners on the market, so GAT Sport should’ve just focused on making Nitraflex more beneficial as a pre-workout product.

This is the final part of the proprietary blend in Nitraflex, which only contains one ingredient – Calcium Fructopyranose Borate. We’ll analyze the safety and effectiveness of this ingredient, so you can determine whether it adds value to Nitraflex overall.

Also known as Calcium Fructoborate, this is found naturally in plants, and is made synthetically to be added into supplements.

It’s believed that this ingredient regulates cholesterol levels and reduces inflammation – but these benefits don’t aid your training session in the gym.

There hasn’t been alot of studies conducted on Calcium Frutopyranose Borate, so it’s not certain whether it’s competely free from side effects.

We recommend that you stay away from this ingredient until further studies reveal it’s safety and effectiveness. This is most likely one of the cheaper, ineffective ingredients that GAT Sport has included in their proprietary blend to cut costs. 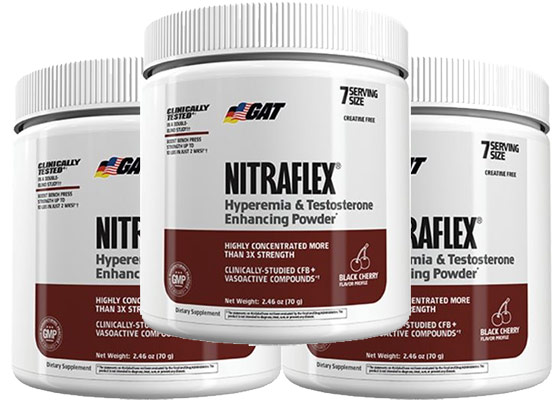 There are a few unstudied ingredients in Nitraflex, so it may cause unknown side effects. The best ingredient in this pre-workout has been under-dosed (Citrulline Malate).

Nitraflex contains ingredients that come with risks of side effects, such as Beta-Alanine, DMAE, and Rauwolscine.

Even the Caffeine in this pre-workout could cause side effects, as you don’t know the exact dose inside – if there’s a high amount of Caffeine contained in Nitraflex, those sensitive to it will experience unwanted side effects like jitters.

Here is a list of the potential side effects from taking Nitraflex:

Nitraflex contains some great ingredients for a pre-workout, such as Citrulline Malate, Caffeine, and L-Theanine – but they’ve ruined these positives by putting all of the ingredients in proprietary blends.

The long list of potential side effects should be enough to put you off Nitraflex – the negatives definitely outweight any positives.

We strongly recommend that you look for a pre-workout that doesn’t contain Beta-Alanine, DMAE, and Rauwolsince.

Instead, look for pre-workout supplements that contain ingredients such as Creatine Monohydrate (proven to boost strength and endurance), Beetroot Extract (promotes muscle pumps), Citrulline Malate in it’s optimal dose (between 6,000mg-8,000mg), and the Caffeine and L-Theanine combo – to ensure you’re getting an effective product and best value for money.