We’ve analyzed each ingredient inside PMP to determine it’s safety and effectiveness – saving you time on deciding whether it’s worth buying. 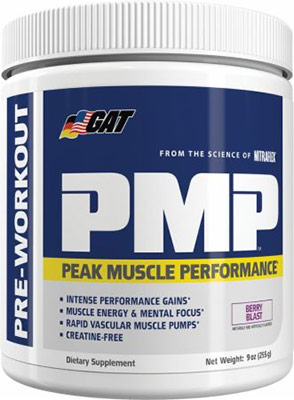 GAT Sport are a supplements company that prides itself on product that have “the ability to build, strengthen, and define their bodies”.

They market a range of products, from fat burners to protein powders. However, there wasn’t any more information available about this company.

Well, proprietary blends are a mixture of numerous ingredients that’re shown to you as one quantity – this is negative because companies often cut costs by filling these blends with ineffective, cheaper ingredients, while adding minimal amounts of effective ingredients.

It’s also important to know exactly what you’re putting into your body, in their exact amounts – to stay safe and avoid unwanted side effects.

However, there are a few positives. PMP contains some great ingredients for a pre-workout, such as Citrulline Malate, L-Theanine, and Caffeine. 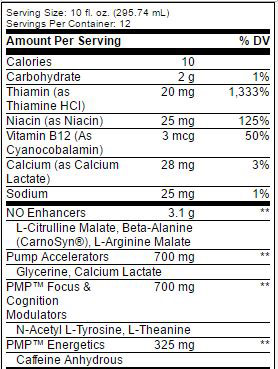 This is the first proprietary blend in PMP. The overall quantity of this blend is 3,1g, but you’ll never know the exact amounts of each individual ingredients inside.

This is one of the best ingredients in PMP. It’s an amino acid that turns into L-Arginine in your kidneys after oral supplementation, which boosts your nitric oxide levels. From there, it dilates your blood vessels (vasodilation) which increases blood flow, resulting in intense muscle pumps while you lift weights.

However, the problem with this ingredient in PMP is the dosing. Citrulline Malate’s only shown to provide its benefits in optimal doses of 6,000mg-8,000mg.

It’s impossible for Citrulline Malate to have been dosed effectively in PMP, as the overall quantity of the ‘NO Enhancers’ proprietary blend is 3.1g (3,100mg).

We recommend looking for a pre-workout that contains Citrulline Malate in its optimal dose – between 6,000mg-8,000mg, to experience great muscle pumps during your workout.

Gat have made a mistake by adding this ingredient. Although Beta-Alanine has shown to improve muscular endurance, it’s also proven to cause paresthesia in doses over 0.8g-1g.

Paresthesia is a tingling on the skin of your face, chest, hands, and extremities – it’s not life threatening, but it’ll affect you enough to ruin your workout.

The problem with PMP, is that Beta-Alanine is part of the ‘No Enhancers’ proprietary blend – meaning you’ll never know the exact amount of Beta-Alanine contained.

We recommend staying away from Beta-Alanine to avoid experiencing paresthesia.

This is simply L-Arginine mixed with Malic Acid. However, while L-Arginine plays an important role in boosting your nitric oxide levels, it’s ineffective when orally supplemented – this is due to its poor absorption rate.

L-Citrulline is more effective in raising your nitric oxide levels, which is already contained in PMP – GAT Sport should’ve simply increased the amount of L-Citrulline to it’s optimal amount and left L-Arginine Malate out of this pre-workout supplement.

This is the second proprietary blend contained in PMP. It’s overall quantity is 700mg, but you’ll never know the exact amount of each individual ingredient inside.

Also known as Glycerol, this ingredient is used in some pre-workouts due to it’s hydration benefits. However, in specialized Glycerine products, there is up to 19g of this ingredient contained.

This is an issue, as PMP contains less than 700mg, meaning it’s not likely to be effective. It’s not key to a quality pre-workout, and can be purchased and taken seperately for a low-price.

This is simply calcium combined with an organic acid. It’s often used in the food industry as a thickener and flavor enhancer. Ultimately, it’s ineffective in a pre-workout as it doesn’t provide immediate benefits during your training session.

The worrying thing is that Calcium Lactate is part of a proprietary blend, meaning it could be taking up most of the blend without you knowing.

This is the third and final proprietary blend in PMP. From the title of this blend, it’s clearly aimed to improve your mental function (memory, focus, and reaction time).

The quantity of this blend is 700mg, but you’ll never find out the exact amount of each individual ingredient inside. Let’s see whether the ingredients prove that this blend can improve your cognition.

This is an amino acid that reduces stress levels and improves mental function (memory and reaction time) due to producing noradrenaline and dopamine.

However, here’s the problem with PMP. L-Tyrosine’s optimal dose is 500mg-2,000mg – this whole blend is 700mg, meaning L-Tyrosine’s almost certain to be under-dosed in this product.

Another issue is that it’s not vital to a pre-workout. Caffeine is also contained in PMP, and provides enough of a mental boost to fit your needs in the gym.

L-Tyrosine is more suited to a Nootropic product.

We’re not sure why L-Theanine is in the ‘Focus and Cognition’ blend. It’s one of the best ingredients in a pre-workout supplement – it works in synergy with caffeine to form a ‘smart-caffeine’, which provides heightened benefits of caffeine without the risk of side effects like jitters.

Clearly, GAT haven’t done their research into the main benefit of L-Theanine in a pre-workout supplement – there shouldn’t be any proprietary blends in any product, but GAT could’ve at least added L-Theanine in a blend with Caffeine.

Another issue is that you’ll never know the exact dose of L-Theanine contained in PMP as it’s part of a proprietary blend. This means that there could be a minimal amount of this ingredient, which wouldn’t deliver any benefits.

We recommend looking for a pre-workout that contains both Caffeine and L-Theanine without any proprietary blends, so you know exactly what you’re getting.

We’re not considering this a proprietary blend, as it only contains one ingredient – Caffeine. We’re not sure why GAT Sport have placed a fancy name on this, but at least you know the exact amount of Caffeine inside (325mg).

Definitely one of the best ingredients in a pre-workout, Caffeine is a strong stimulant that boosts strength, endurance, and mental function (memory, focus, and reaction time).

It’s also one of the safest nutrients out there, as it’s used daily around the world in products like tea and coffee. However, there’s an issue with the dosing of Caffeine in PMP.

The recommended daily allowance (RDA) for Caffeine intake is 400mg – this pre-workout contains 325mg, meaning you won’t be able to consume many other products that contain Caffeine – say goodbye to your morning coffee.

Not only that, 325mg is a huge amount to consume in one serving, especially to those sensitive to it. We recommend looking for a pre-workout that contains 15-200mg of Caffeine per serving, to stay safe and avoid any unwanted side effects like jitters, energy crashes, and insomnia. 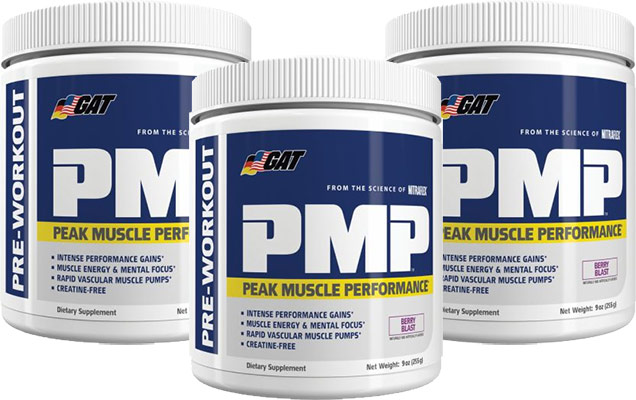 PMP is made up of 3 proprietary blends, so you don’t know exactly what you’re getting here. It can also cause side effects due to the large amount of Beta-Alanine and Caffeine inside.

PMP might contain a large dose of Beta-Alanine which can cause paresthesia – a dose of over 0.8-1g has been known to cause this side effect, which is a tingling on the skin of your face, chest, hands, and extremities.

Also, while Caffeine is one of the safest nutrients you can find, it can cause side effects like jitters and energy crashes when consumed in doses larger than 300mg. PMP contains 325mg, so there’s a risk you’ll experience these side effects – choose a pre-workout that contains 150-200mg of Caffeine to experience the benefits without the unwanted side effects.

Here are the potential side effects you may experiencing with PMP:

GAT Sport have tried to make the ingredients in PMP sound more effective than they are by putting them in a proprietary blend and giving them fancy names – this also allows them to hide the amount of each individual ingredient so you’ll never know how effective each ingredient really is.

You should be concerned by the high dose of Caffeine inside (325mg), which can cause you side effects – look for a pre-workout that contains 150-200mg servings, so you’ll experience the benefits without any unwanted side effects.

Also, GAT Sport haven’t added Creatine Monohydrate, which is proven to boost your strength, endurance, and mental function (memory and reaction time). Beetroot Extract is another ingredient that is great in a pre-workout supplement, as it promotes muscle pumps in the gym.

It’s important to look for a pre-workout with a optimal dose of Citrulline Malate (between 6,000mg-8,000mg) so you’ll enjoy intense muscle pumps while you lift weights.

We’ll give this product has avoided being given a 1 star – purely because it contains a few great ingredients such as Caffeine, L-Theanine, and Citrulline Malate, even if they’re not dosed to be effective.