The Ghost Legend pre-workout has been attracting a lot of buzz lately, as has the Ghost brand as a whole. Naturally, we want to see what all the fuss is about.

Ghost is a company founded by Ryan Hughes (a former IFBB Pro), Daniel Lourenco (a “cereal aficionado”), and Paul Haverland (“the Packaging Guru”).

The first we notice is that the guys at Ghost like to talk about themselves A LOT; they spend very little time telling the customer what they should expect in terms of results.

Yet their goal “to combine fully-disclosed formulas, dope designs [and] serious attention to detail” does sound appealing.

But does the founders’ claim to be “building the brand we all wish existed” stand up to scrutiny? When it comes down to it, that all depends on the products and their ingredients…

As promised, Ghost Legend uses a fully-disclosed formula with no proprietary blends, which means you see the doses of each ingredient – this is a great start.

The pre-workout also contains a trio of ingredients that we’re always pleased to see (Caffeine, L-Citrulline, and Rhodiola Rosea). However, you’ll find quite a few that could cause side effects. 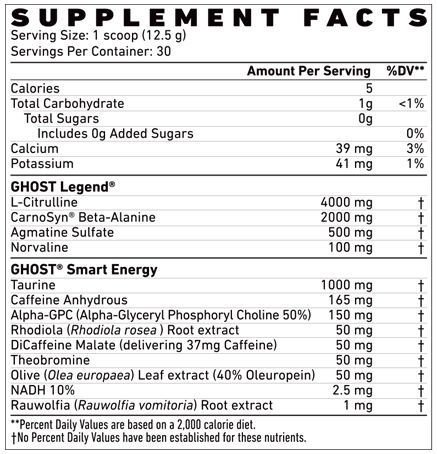 L-Citrulline is a key pre-workout ingredient – and it’s great to see it in the Ghost Legend formula.

The amino acid converts to L-Arginine in your body, which increases nitric oxide to improve blood flow for awesome muscle pumps.

However, we prefer Citrulline Malate (a blend of the amino acid with Malic Acid) for all the benefits of L-Citrulline, plus reduced muscle soreness.

Despite that, we’re not fans of this ingredient.

This is because Beta-Alanine is known to cause itching/tingling sensations which, as many lifters report, can ruin your workout.

Agmatine Sulfate is a metabolite of Arginine. And as the Ghost website makes clear, it’s included here to enhance muscle pumps by working in synergy with L-Citrulline.

The basis for this lies in the idea that Agmatine regulates eNOS levels in the body, which then supposedly helps increase nitric oxide in the muscles.

But the evidence for this lies with a few animal studies, but there isn’t enough evidence that Agmatine boosts muscle pumps in humans.

As a proven ingredient, we’d much prefer to see Citrulline Malate, instead of the Citrulline-Agmatine combo we find here.

Norvaline is another amino acid that’s also reported to boost nitric oxide in the body for more satisfying muscle pumps.

Of late, it’s been the subject of a lot of hype among lifters. But there is absolutely no evidence that it works. Considering Ghost claims to pay “serious attention to detail”, the use of Norvaline seems like a misstep.

Used both as an anti-cramping agent and for its ability to regulate blood sugar spikes, Taurine is often used in energy drinks.

Its use in energy drinks has led to the mistaken belief that Taurine is a stimulant, but this isn’t the case. To be fair, the organic acid won’t do you any har, but it doesn’t have much use either.

Caffeine is a popular stimulant – and we believe it’s the only one you’ll ever need in a pre-workout.

With decades of research behind it, Caffeine is proven to boost energy, improve focus, enhance motivation and increase power output – all of which makes it a perfect pre-workout ingredient. And best of all, it’s safe (as long you don’t take too much).

We – and many lifters we speak to – find more than 150-200mg in one hit gives us jitters and makes us anxious.

In total, Ghost Legend contains 202mg of Caffeine, which isn’t perfect, but it’s not too bad either.

Also known as Alpha-Glycerophosphocholine, Alpha-GPC is said to boost focus and increase power output. However, only a single study has assessed the effects of Alpha-GPC for these purposes.

So until further research backs up these findings, there isn’t enough evidence to support using it in this supp, or any other pre-workout.

In addition, Alpha-GPC is a rich source of Choline, which can make your breath and body odor smell fishy.

Rhodiola is a plant that is known to help you focus, increase endurance, and reduce fatigue. As a result, it’s one of our favorite pre-workout ingredients.

The optimal dose of Rhodiola is 50-100mg, so thee guys at Ghost have done well here.

Theobromine is a compound found naturally in tea and chocolate. It is believed to increase blood flow, which improves muscle function and recovery. It’s also thought to have a mild stimulant effect, which is why many brands use it as an alternative to Caffeine.

Olive Leaf Extract is thought to reduce blood pressure. This could (in theory) make it useful for the those with high blood pressure who take pre-workouts containing stimulants.

However, there is limited evidence that Olive Leaf Extract does actually lower blood pressure.

Nicotinamide Adenine Dinucleotide + hydrogen (or NADH for short) is a compound found in all living cells. It is thought to improve focus and athletic performance, but there is insufficient evidence of this.

Native to tropical Africa, Rauwolfia Vomitoria is a plant that also goes by the names of Poison Devil’s Pepper and Rauwolscine. It has been investigated for its fat-burning potential, which isn’t a primary reason to take a pre-workout.

It has a similar molecular structure to Yohimbine, which has been banned in some European countries, due to a list of potentially harmful side effects. 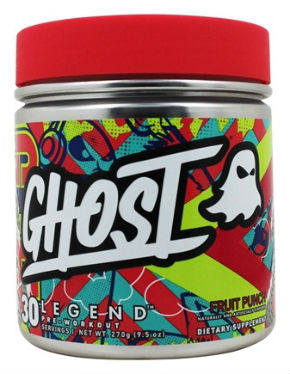 The Ghost Legend pre-workout is largely safe to use. However, you may experience the following side effects:

Ghost Legend contains some great ingredients, as well as some that seriously let it down.

We’re always pleased to see L-Citrulline, Caffeine and Rhodiola Rosea in the pre-workouts we test. In fact, you’ll find all three of those ingredients in some of the best supplements of this kind on the market.

However, there are just too many ingredients in this supplement that can cause unpleasant side effects – and we’ll never advise taking a pre-workout that pose those kinds of risks.