Gladiator Pre-Workout is marketed by Ryno Power. It comes in 30 serving containers for $32.95, in one flavor – Strawberry Lemonade.

This is a natural product, which is great. Let’s take a closer look at the ingredients, to see whether it’s effective. 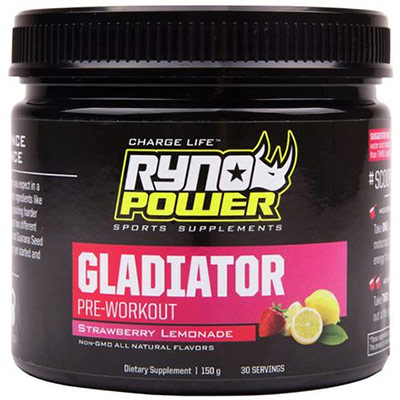 Ryno Power is a supplements company that prides itself on their natural ingredients made in GMP facilities – this is a good sign of a great company.

Hopefully their product, Gladiator Pre-Workout, will continue to impress.

Immediately after looking at this pre-workout supplement’s ingredient list, we see a negative – it contains a proprietary blend.

But what are proprietary blends and why are they bad? Well, these blends are actually one of the biggest cons in the industry.

They’re a mixture of numerous ingredients that’re shown to you as one quantity – meaning you don’t know the exact doses of each ingredient.

Ultimately, if a nutrient isn’t dosed correctly, it will be ineffective or potentially cause side effects. We’ve analyzed Gladiator Pre-Workout’s key ingredients, to see whether it can deliver on its claims. 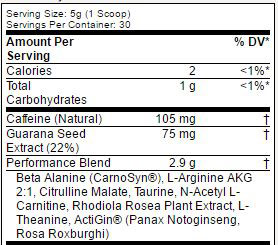 However, it’s been slightly under-dosed here – an optimal dose per serving is 150-200mg, which will provide you with benefits, but keep you away from side effects like jitters or energy crashes.

With only 105mg Caffeine in Gladiator Pre-Workout, those with a high tolerance to Caffeine won’t experience any benefits.

This is the proprietary blend in Gladiator Pre-Workout. It’s a mixture of 8 different ingredients, but you’re only shown the overall quantity of the blend (2.9g).

Ultimately, this puts you at risk from experiencing side effects, if you’re sensitive to any ingredients inside – or if ingredients have been over-dosed.

This molecule has shown to enhance muscular endurance in studies. But here’s the bad news – it can cause paresthesia in doses over 0.g-1g.

For those that don’t know what this side effect is: Paresthesia is a tingling on the skin of your face, chest, hands, and extremities – it’s not life threatening, but it’ll ruin your workout in the gym.

As Beta-Alanine is part of a proprietary blend, no-one knows the exact dose of this ingredient in Gladiator Pre-Workout. This means you’re at risk of suffering from Paresthesia.

Another bad choice of nutrients from Ryno Power. L-Arginine’s been added into this pre-workout, as it’s responsible for raising nitric oxide levels in your body.

However, it has a very poor absorption rate, meaning it’s ineffective when orally supplemented. What’s worrying is this – this blend could be filled with L-Arginine, which would result in this whole proprietary blend being ineffective.

This is the best ingredient in Gladiator Pre-Workout – it’s a shame that it’s part of a proprietary blend.

Citrulline Malate has a great absorption rate and turns into L-Arginine in your kidneys. From there, your nitric oxide levels are raised, which results in vasodilation (widening of your blood vessels).

What does this do? Well, you’ll experience intense muscle pumps during your gym session.

But here’s the bad news: Citrulline Malate’s only effective when consumed in doses between 6,000mg-8,000mg – it’s impossible for this pre workout to contain this amount, as the whole blend is only 2.9g.

Also known as ALCAR, this compound has shown to reduce fatigue and boost cognition (alertness, focus, reaction time) in studies – both great benefits for a pre workout supplement.

But here’s the problem – ALCAR’s only effective when taken in 500mg-2,000mg doses. As no-one knows the exact dose of this ingredient, as it’s part of a proprietary blend, there might not be enough to be effective.

A key ingredient in any pre workout, this is herb that’s been used for centuries in China and scandinavia for good reason – it’s proven to reduce fatigue and improve cognition (alertness, focus, reaction time) in the gym.

This is an ingredient that Ryno Power can get away with putting into a blend. Here’s why – even a small dose fo 50mg can be used to reduce fatigue.

Still, it would’ve been better to have been given the exact dose of this ingredient – you’ll can never be certain that there’s even 50mg inside this proprietary blend.

Ryno Power are clearly knowledgeable about supplements, and they’ve done a great job adding L-Theanine into their pre workout.

This is because, L-Theanine forms a ‘smart-caffeine’ when paired with Caffeine, boosting the benefits (improved strength, endurance, cognition), while reducing the risks of side effects like jitters or energy crashes.

However, studies have shown that there needs to be a higher dose of L-Theanine than Caffeine for it to be effective. As it’s part of a proprietary blend, no-one knows whether there’s an optimal dose of this ingredient inside Gladiator Pre-Workout.

Stevia is extracted from the leaves of plants, and is 300 times sweeter than sugar. But here’s the bad news – it’s known to commonly cause side effects like headaches, bloating, and dizziness.

Ryno Power should’ve used other natural sweeteners, such as Erythritol, Xylitol, and Monk Fruit Extract – these are free from side effects. 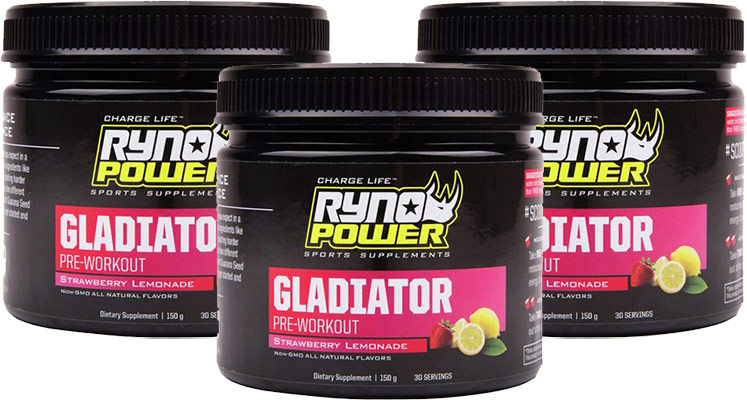 After analyzing Gladiator Pre-Workout’s ingredient list, there’s only one risk of side effects – Stevia. This sweetener has been known to cause headaches, bloating, and dizziness.

Also, no-one can be certain whether the ingredients that’re part of the proprietary blend have been optimally dosed – as the exact amounts aren’t given to you.

If this pre workout didn’t have a proprietary blend, and had optimally dosed ingredients, then it would easily be competing with the best products on the market.

However, it’s let down by having almost all of it’s key ingredients inside a proprietary blend – meaning they could potentially be ineffective in Gladiator Pre-Workout.

We recommend looking for a pre workout supplement that contains more key ingredients, without any proprietary blends. Also, other plant based sweeteners come with less risks of side effects than Stevia, which is used in Gladiator Pre-Workout – these include Erythritol, Xylitol, and Monk Fruit Extract.